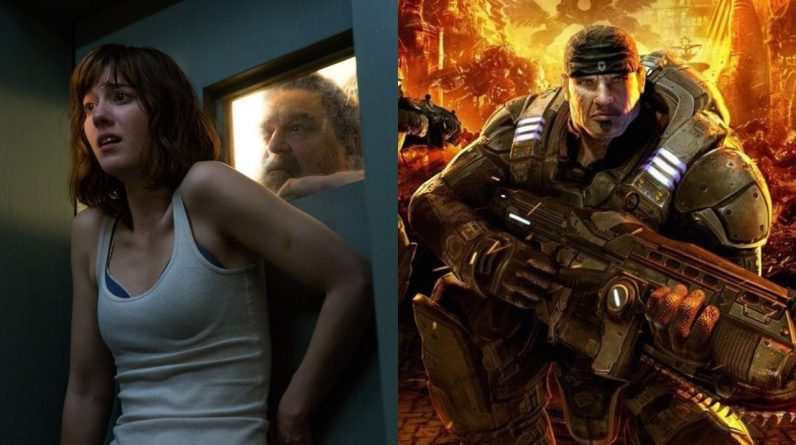 IGN just hosted another Watch From Home Theater, this time featuring director Dan Trachtenberg watching everyone’s favorite Cloverfield spinoff, 10 Cloverfield Lane. Trachtenberg’s live commentary track was full of fascinating anecdotes and new revelations about the making of this unique psychological horror movie.If you missed our 10 Cloverfield Lane WFH Theater, you can still check it out in the player above or below. But if you just want to know the key takeaways from the episode, read on to learn more about the new details Trachtenberg revealed.

Cloverfield as The Twilight Zone

The Cloverfield franchise is a strange beast. There are currently three films in the series, but they don’t tell a sequential story so much as explore individual stories set within a shared universe. That was always the intention, according to Trachtenberg. He said the series (once it actually became a series) was envisioned as a modern-day Twilight Zone anthology.

“It’s like The Twilight Zone, except that instead of having it be called ‘The Cloverfield Zone,’ any movie that comes out you have ‘Cloverfield’ in the title as a fun way of doing it.”

10 Cloverfield Lane is notable for featuring a screenplay written by a pre-Whiplash and La La Land Damien Chazelle. It turns out Chazelle was originally attached to direct as well, but he dropped out in 2014 once Whiplash received funding

Trachtenberg revealed Alfred Hitchcock’s seminal 1960 film Psycho was one of the biggest inspirations for 10 Cloverfield Lane, which isn’t surprising given the suspenseful plot and confined setting. Trachtenberg said composer Bear McCreary’s score was especially Psycho-influenced, as were the opening scenes of Mary Elizabeth Winstead’s character Michelle fleeing her old life.

While 10 Cloverfield Lane features only three main cast members, it does include another A-List Hollywood star in cameo form. None other than Bradley Cooper provides the voice of Ben, Michelle’s boyfriend who calls her early in the film. Trachtenberg told us casting Ben was actually a difficult process. Eventually producer J.J. Abrams emailed Cooper and convinced him to join up. Cooper wound up recording his lines on his phone.

The film originally began with what Trachtenberg described as a more traditional opening sequence. However, both he and Winstead agreed to alter that opening to help better align it with the rest of the film in terms of tone and Michelle’s overall character arc.

Describing the original opening, Trachtenberg said, “She’s with her boyfriend and she’s going to meet his parents for the first time, and she’s nervous about that. Essentially, it was a very familiar horror movie opening where the protagonist is worrying about something frivolous, and then something crazy happens… It wasn’t great and it wasn’t really thematic. Mary and I were really driven by the idea that this is someone who would be breaking a cycle by going through this.”

Trachtenberg made his directorial debut on 10 Cloverfield Lane. He revealed the shot of Michelle waking up in her underground cell was actually his very first shot on the movie. For the most part, he shot the movie chronologically, in order to make the tension that much more authentic.

10 Cloverfield Lane hinges a lot on John Goodman’s ability to paint a convincing portrait of the paranoid, unstable Howard Stambler. Trachtenberg told us that while Goodman wasn’t his first choice to play Howard, once the idea was floated he couldn’t picture anyone else in the role. Trachtenberg took inspiration not from Goodman’s past roles, but instead an infamous old interview where Goodman became progressively more agitated with the interviewer while struggling to continue forward.

Trachtenberg pointed out one minor but important detail regarding Howard’s underground bunker. There’s a welcome mat at the front entrance of the bunker, and Trachtenberg said he agonized over what direction to orient the mat and what that implied about Howard’s character.

While 10 Cloverfield Lane is a low-budget thriller that takes place almost entirely within one structure, there is one scene featuring a liberal use of CGI where you might not expect it. When Michelle looks outside and sees the dead pigs, the pigs themselves are completely computer generated. Trachtenberg revealed the crew attempted to use practical effects but couldn’t achieve the right level of gore.

Most fans would agree the scene of Michelle, Howard and John Gallagher Jr.’s Emmett sharing their first meal together is among the film’s best. Trachtenberg told us he looked to both Jaws and Se7en for inspiration here. Bizarrely enough, he also revealed that the scene was due to be cut, but editor Stefan Grube saved it from the chopping block.

Putting on a Happy Face

One of the notes Abrams gave Trachtenberg was that the shower curtain in the bunker needed to have a happy face pattern in order to make it stand out more. However, the concern was that a regular happy face symbol might draw comparisons to Watchmen, so Trachtenberg went through the agonizing process of picking out just the right smiling duck pattern for the bathroom.

He said, “Is it a million ducks? Is it just the one duck? The duck holding the umbrella is what we finally figured out.”

10 Cloverfield Lane began life as a spec script titled The Cellar before morphing into a Cloverfield spinoff. Trachtenberg told us that surprisingly little about the project changed after it was decided to forge that Cloverfield connection, with only the shot of the mailbox being added later on. However, there were other connections considered. At one point there was discussion of including the satellite from the first movie. And the reason the movie was shot under the codename “Valencia” is because Trachtenberg originally intended to showcase the Siege of Valencia in the film.

Trachtenberg also told us that the original plan (before the movie became integrated with Cloverfield) was to switch to a spherical camera lens for the final scenes so the film could take advantage of IMAX screens. Ironically, even though this idea was abandoned, 10 Cloverfield Lane wound up playing in IMAX theaters anyway.

Trachtenberg gave plenty of insight into the ways the film’s story changed over time, particularly when it came to the climax. He told us there was originally a running subplot involving Howard and Emmett giving Michelle sedatives, leading to a scene where she has to shower and fears being spied upon.

“I just felt like the movie doesn’t need it,” Trachtenberg said. “We’re not doing that the whole movie, and I don’t want to be exploitative and showing her naked. Not just because it’s wrongfully salacious, but just because it’s a go-to for a horror movie.”

Trachtenberg confirmed an earlier version of the script featured an ending where Howard doesn’t die, though that plot point had changed by the time he came onboard. “That version of the script I haven’t read. That was very different in tone. Howard was sort of a good guy, and Michelle was not treating him good the whole movie. So in the end, when Howard’s proven right, she had to learn her lesson… Howard was good and Emmett was bad in that version.”

Speaking about the sequence where Michelle escapes the bunker only to attract the attention of the alien ship, Trachtenberg said, “There was a section of this… when she’s running away and she ran into a piece of farming equipment… It was a whole elaborate thing that felt exciting while we were shooting it and did not come together.” That was when the focus shifted to Michelle taking temporary refuge in the nearby house.

The design of the aliens at the end was a subject of much debate and back-and-forth. “I was hellbent on making these things organic, and J.J. was hellbent on there being tech and armor associated with them… It became designers listening to two different directors with ideas.”

Trachtenberg said there was a more elaborate version of the ending that was screened for a test audience but didn’t earn a strong reception. “Eventually the audience was like, ‘Enough! End the movie already!'”

The 14 Best Horror Sequels of the Century (So Far)

Even the title was in flux at one point. Trachtenberg said there were several alternate titles considered, with ideas like “The Book of Cloverfield” and “The Cloverfield Files” floated as a way of highlighting the franchise’s anthology approach. Another possibility involved titling the movie “Below,” setting up a potential sequel called “Above.”

From Smashed to Cloverfield

Trachtenberg cast Winstead as the lead largely because of her performance in 2012’s Smashed. In fact, Trachtenberg drew directly from that performance when shooting the scene at the end of the film where Michelle is both crying and laughing.

How Video Games Inspired the Movie

As much as Trachtenberg drew from Hollywood classics like Jaws and Psycho. he revealed that 10 Cloverfield Lane is equally influenced by iconic video games like Half-Life 2 and The Last of Us.

“I took as much inspiration from my experience playing Half-Life 2 and The Last of Us and Uncharted as I did from the movies I watched,” said Trachtenberg. “The thing I always say about it is I find first-person games to be less immersive than third-person games. Even though first-person games – you are the character. It is you. But I feel like when we’re linked to a character and watching their behavior. I can then identify and relate and feel more for that that when, ‘It’s you! It’s me!'”

He continued, “Video games have always been a massive inspiration, and certainly for the filmmaking in the movie and the kind of movie that it is in general.”

On the subject of figuring out the creature designs, Trachtenberg told us the Gears of War franchise became a major source of inspiration. “I love the idea that the spaceship is some space creature that instead of pulling their rudder on a boat, it’s pulling on its organ to make it turn left or right. We grafted the tech on top of this organism.”

Several IGN readers wanted to know whether Trachtenberg has any plans to make a direct sequel to 10 Cloverfield Lane, one that would continue Michelle’s story. He acknowledged his interest in the idea, even if he doesn’t feel a sequel is strictly necessary.

“I always felt like there’s definitely a fun, really cool way to do the next part of her story that I would love to do,” said Trachtenberg. “At the same time, there’s something awesome about there never being a sequel to this. I think it ends on a really beautiful little grace note for her journey, which is great. I would if I could, but I don’t feel that we need to.”

Where Is the Portal Movie?

One of Trachtenberg’s first film projects was a 2011 short film called “Portal: No Escape,” based on Valve’s hugely popular puzzle game. In response to an IGN reader’s query, we asked Trachtenberg if he knew of the current status of the Portal feature film, which was originally teased way back in 2013, and if he himself might be tapped to direct it. The short answer? He’s not sure.

“I casually talked about it with them at one point. Portal and Half-Life – both of them are awesome. I don’t know if they’re still doing it… My answer is I have no idea.”

For more on that subject, check out our breakdown of all the video game movies currently in development. And be sure to read our recap of IGN’s Rogue One WFH Theater, where we learned more about the many ways that Star Wars prequel evolved.