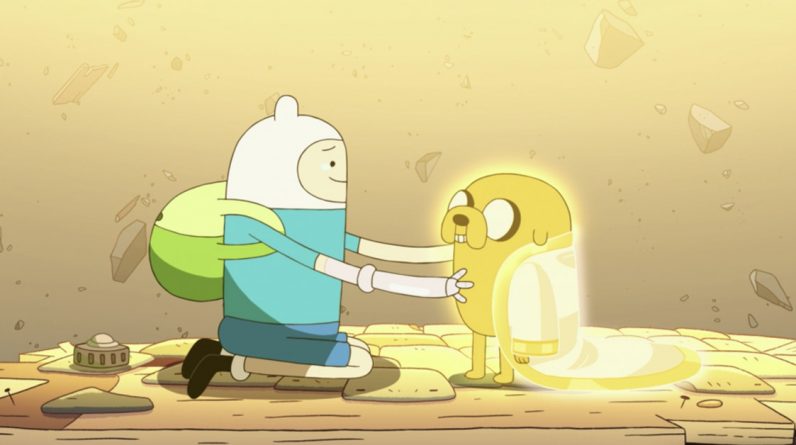 Let’s get one thing out of the way: In the latest HBO Max Adventure Time special, series stars Jake the dog and Finn the human are dead.

This isn’t a huge plot twist. The special literally kicks off with the revelation that the characters are dead, complete with a title card hammering the point home. Jake died earlier, since he’s a dog, with a limited life span. Finn, who has only recently died, must search through the different levels of the land of the dead to find his old friend. Each level is a separate little pocket universe, like a lush green garden or a sticky quagmire. But while the “separate tiers of the afterlife” concept is reminiscent of the underworld’s layers in Greek mythology, or the circles of hell in Dante’s Inferno, where each concrete level has a different schtick, depending on how good or bad you were in life, Adventure Time’s approach to the land of the dead actually takes on a more poignant flavor.

The way Adventure Time handles what comes after death is actually reminiscent of the way The Good Place dealt with the same issues. The specificities aren’t the same (especially when it comes to “bad” people), but they both center around two core ideas: the best thing we can hope for in the afterlife is a little extra time with the people we love, and ultimately, no matter how perfect a paradise may be, it’s better if what happens after death is something we can’t comprehend. These two concepts weave together nicely in both shows, creating a concept of an afterlife that isn’t centered around eternal riches.

The final few episodes of The Good Place interrogate this notion of a fallible paradise. When Eleanor (Kristen Bell), Chidi (William Jackson Harper), Tahani (Jameela Jamil), and Jason (Manny Jacinto) finally make it to the coveted good place, they learn that it’s actually not that great. Sure, it’s full of endless parties and unicorns and whatever else your heart could desire, but as Hypatia of Alexandria (Lisa Kudrow) shares, after a few hundred years, that all gets real old.

The solution? Leaving it behind. As Eleanor realizes, vacation is only special because it ends. And so demon architect Michael (Ted Danson) opens a door into the universe, designed for inhabitants of the good place to step through once they’re ready. What that ready is never really gets defined concretely, because it’s different for every person. There comes a time, after centuries of living the good (after) life, where each character feels ready to move on. The kicker is that no one knows what happens when you walk through that door. With The Good Place, creator Mike Schur crafted a detailed afterlife that evolved and shifted as the main characters fought for the entirety of humanity — but in the end, their final fate remains unknown.

Adventure Time: Together Again takes a different approach to what comes after death. While the realm of the dead is organized in tiers, the ultimate level for the best do-gooders feels more like the concept of Nirvana than a Heaven where every wish is catered to. Finn finds Jake in this level, where he’s reached a place of spiritual contentment, serenely spending his eternity bathed in golden light. Finn manages to steal a device that lets him travel through the different death levels and find Jake, but he hasn’t earned his place in that top tier, which means that if he wants to spend his afterlife with Jake, he needs to try again in a new life, doing better this time.

Adventure Time’s afterlife operates with a system of reincarnation, allowing anyone who’s unsatisfied with their lot to take another shot at life, as completely new individuals. Some — like Jake’s family and Tree Trunks the elephant — are content with the afterlives they’re given. But Finn can’t imagine eternity without Jake, so at the end of the episode, he decides to step through a door to be reincarnated, bidding Jake farewell. But in the moment that Finn steps through the portal, Jake decides to give up eternal bliss for a chance to be with Finn in some new form.

Adventure Time gives a more concrete answer than The Good Place about what happens on the other side: Finn and Jake will be reincarnated in some form, but viewers don’t know who they’ll become, or even whether they’ll remember each other. We just know they chose each other over paradise.

The idea of a Great Beyond beyond an initial Great Beyond isn’t new. In Black Mirror’s “San Junipero,” Kelly (Gugu Mbatha-Raw) waffles between spending eternity in the blissful simulated beachside town or embracing the unknown. In Pixar’s Coco, when someone dead is forgotten by the living, they fade into nothingness. In Hirokazu Kore-eda’s After Life, dead people spend a week deciding what perfect memory from their lives they want to re-experience before moving on to the unknown.

It’s particularly evocative that in all these instances, the idea of an afterlife we can’t even comprehend — whether it’s an ultimate fate, a new choice to make, or a punishment — is juxtaposed with one of the most fundamental elements of being human and alive: spending time with people we care about. It’s not so much that companionship or memories of it are a preferred choice, or the ultimate destiny. It’s just that when creators try to comprehend the idea of what lies beyond, they attempt to ground it into something real and tangible. We don’t know what happens after we die, and maybe that’s for the better. But what we do know is that it wouldn’t be all that great if we faced it by ourselves. As Chidi says in the penultimate episode of The Good Place: “That’s what the Good Place really is. It’s not even a place, really. It’s just having enough time with the people you love.”

Adventure Time: Distant Lands — Together Again is available to stream on HBO Max. All four seasons of The Good Place are available on Netflix.