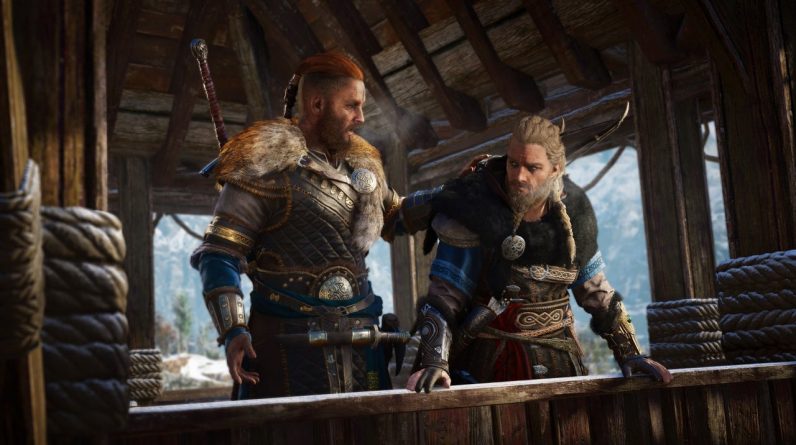 Assassin’s Creed Valhalla will introduce new narrative elements for the Animus that provide lore justifications for new gameplay possibilities, namely the ability to switch the gender of the player character at will, as well as bring modern-day protagonist Layla into the historical open world.A recent hands-on demonstration of Assassin’s Creed Valhalla I took part in featured the ability to swap Eivor’s gender from a menu. But it turns out this isn’t a demo feature to allow journalists to show both male and female versions of the character to readers. Talking to IGN, Valhalla’s Narrative Director Darby McDevitt explained – while avoiding any story spoilers – that this is a new gameplay feature to ensure both male and female versions of Eivor are considered canon. The feature is backed up by new lore that upgrades the abilities of the Animus, the machine that allows Assassin’s Creed’s characters to explore the memories of their ancestors.
Preorder Assassin’s Creed Valhalla

“You can go into the Animus layer of our game,” he said. “There’s an option to change the memory stream. To explain why would spoil a long-running secret, but I will say that the whole reason for why you can switch [Eivor’s gender] back and forth fully embraces the often overlooked science fiction nature of our series.”

“We’ve got this thing that’s called genetic memory, and we’ve got this Animus,” he added. “What are all the ways you can play with that? And how could we leverage that to make a character that you could choose male or female? We found a way that we think is pretty satisfying.”

While McDevitt would not explain the story reasons for the Animus doing this, it seems reasonable to predict that this is an continuation on from an idea explored in Assassin’s Creed Odyssey. In that game, when the Animus scans DNA found on Leonidas’ spear, it finds two potential matches in siblings Kassandra and Alexios, hence your choice of protagonist. For Valhalla, we may be dealing with a damaged DNA sample that cannot determine Eivor’s gender, and so the simulation fills in the blanks based on what Layla/the player asks it to do.

The Animus also has another new ability: to bring modern-day protagonist Laya into the simulation itself, allowing you to control her in the Anglo-Saxon open world. It’s an innovation designed to solve a problem previous games have had.

“The modern day story often grinds the experience to a halt,” McDevitt said. “Taking you out of whatever historical period you’re in and putting you into the present day where you have a bunch of different characters with different skills, different affordances, and different abilities. It really has this kind of hard stop.”

Layla being able to explore the open world prevents that hard stop. “The story is that there are anomalies inside the stimulation. And when you find them as Eivor, Layla and her handlers will pause the simulation, and set up this big thing for her to deal with. It’s a big puzzle, lots of intense puzzle solving and parkour so that you can acquire a bit of interesting data and then close this rift.”“And so that the experience is much more comfortable,” he adds, “you’re not just going into a loading menu, going into a small office somewhere in the present day. You still get to be Layla, but you get to be Layla in the past. And so that means that all these interesting skills that she may have learned – the parkour, the epic vistas, and the puzzle solving – you get to float right into that without any kind of hitch.”

For more from Assassin’s Creed, check our our big breakdown of the evolution of the series, as well as our hands-on with Valhalla.