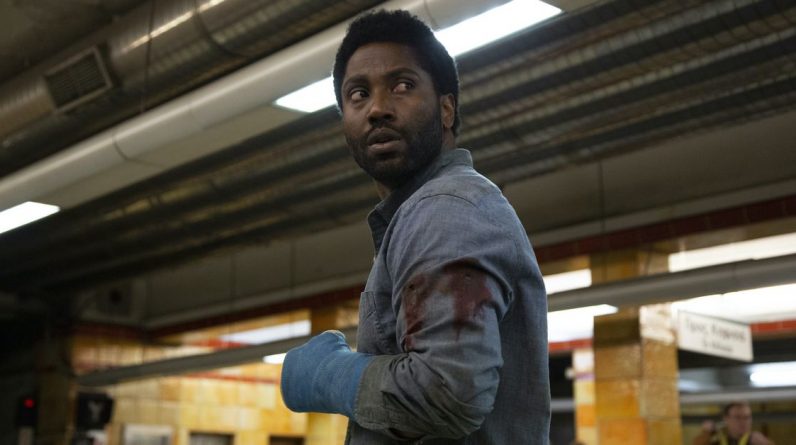 The setup to Ferdinando Cito Filomarino’s Netflix suspense flick, Beckett, is enticing, even thrilling. Beckett (Tenet and Malcolm & Marie star John David Washington) wakes up in bed, draped over his girlfriend April (Alicia Vikander). They’re enjoying their Athens vacation, sightseeing the stony ruins and foggy mountains that dot the exotic locale. But they hear a rumor of an upcoming protest that’ll dim their sunny spot. On their drive to a different, quieter resort in the mountains, Beckett falls asleep, crashing their car into a house. Beckett emerges from the crash with a broken arm, but April dies.

Beckett bites off way more than it can chew. Following the crash, Beckett tells police he saw a redheaded child in the house he collided with. He doesn’t know it, but this kid’s face is plastered all over Greece. He’s the kidnapped nephew of the leftist politician Karras (Yorgos Pirpassopoulos), who’s building a coalition to reverse the austerity measures imposed on Greece by the European Union. His strategy has displeased the country’s far-right facists. The film never reveals anything else about these opposing sides, though, which keeps viewers at arm’s length, unable to fully engage with the film’s larger political conflict.

Beckett is the Italian director’s first English-language film. It embroils an unwitting protagonist in Greece’s internal political conflict, sending him on the run from two homicidal, unnamed people (Panos Koronis and Lena Kitsopoulou) posing as cops. Kevin A. Rice’s script follows in the footsteps of similar wrong-man stories: Alfred Hitchcock’s The 39 Steps, Andrew Davis’ The Fugitive, and so forth — stories concerning people forced to go on the lam after being sucked into larger conspiracies. This film, unfortunately, fails to live up to the quality of its influences. Filomarino’s Beckett lacks urgency, wit, and a lead actor capable of pulling together its underwritten themes.

Rice’s script is bloated, yet underdeveloped when it tries to balance Beckett’s mourning with his fight for survival. At every turn, he cries at the thought of his dead girlfriend. But the film barely spends setup time with either of them, save for their fleeting sightseeing. And Beckett doesn’t share any memories about her to let viewers in on his loss. It focuses on the pursuit by the false cops, who hope to tie up the loose end Beckett represents before he can reach the American embassy, where US agent Tynan (Boyd Holbrook) is waiting for him. The obstacles these assassins pose aren’t entirely attention-grabbing, because Beckett works past them too easily.

Worst yet, the character as scripted is one-dimensional, giving Washington little to work with. But Washington doesn’t bring much to the table either. He’s overshadowed by his co-stars, flat and devoid of any charisma. Vikander only appears in the film’s opening minutes. In that brief time, she’s a far more giving scene partner than her counterpart, offering furtive glances and maneuvering Washington’s cement block worth of emotions. Not only does Beckett miss her when she’s gone, the audience is likely to miss her presence too.

Vicky Krieps (Phantom Thread) as Lena, one of two leftist activists who helps Beckett to the American embassy, also outshines Washington. Krieps’ emotive face offers the sense of warmth that the script cannot. The film barely gives up anything about her underwritten character, but she makes her years of fighting for change visible, and her empathy for Beckett, a man she just met, is written all over her face. Washington struggles to pull a similar range into his character. You need charisma to pull off a wrong-man thriller, a reason to root for the good guy beyond the narrative saying we should. Washington doesn’t have that.

And he never has. He looks physically lost, as though he’s never had a camera pointed at him. (See Tenet.) Whenever he cries, he has a habit, seen in Malcolm & Marie, of rolling his eyes way back into his head to find the tears. And his blank stare doesn’t pull viewers into his worldview. (See Tenet again. Or don’t.) He leaves viewers at a perpetual distance, always watching him react instead of inhabiting his emotions. All these shortcomings come back to bite him here.

Though the lead actor is expected to bear the brunt of responsibility when a film lacks charisma or personal draw — especially a wrong-man movie — it would be unfair to blame Washington alone for this misfire. Beckett evades his pursuers through craggy cliffs, a graffiti-painted train, and in the trunk of a car. But all these setpieces feel like they were captured in haste, and they don’t maximize the inherent intrigue of their surroundings. Why set a film in Greece if you’re going to make its exotic allure so generic? Filomarino needn’t show tourist traps, but he doesn’t find an interesting hole in the wall either. Even the extras are unexciting and seemingly disengaged. Washington, a Black man, is running through the streets with handcuffs on, yet no one blinks an eye.

At times, it feels like Filomarino does want to bring race into the story. But the villains’ intentions aren’t just mysterious, they’re frustratingly opaque. The Greek dialogue isn’t translated in the subtitles, so when the villains discuss Beckett, we don’t know how they’re describing him to each other. We do, however, at different points, hear his pursuers shout into crowds that they’re looking for a Black man. When Beckett arrives at the American Embassy, he sees a picture of Obama. It’s as though Filomarino knows the subtext of an African-American being chased in a foreign country by police, but doesn’t have the narrative or visual vocabulary to tease out his intentions.

The only Beckett crew member who seems to understand the vibe a wrong-man film needs is composer Ryuichi Sakamoto (The Last Emperor and Merry Christmas Mr. Lawrence), whose shrieking strings and off-kilter combination of cymbals and toms builds anxiety. The other moving parts are too substandard to sustain the wanted suspense, to the point where even a protest turned ugly and Beckett leaping off a building to stop a moving car isn’t enough to resuscitate the film. Beckett’s lead actor is a dull performer spinning a duller web, and he’s the wrong man to deliver this flawed, unruly plot.

Beckett debuts on Netflix on August 13.