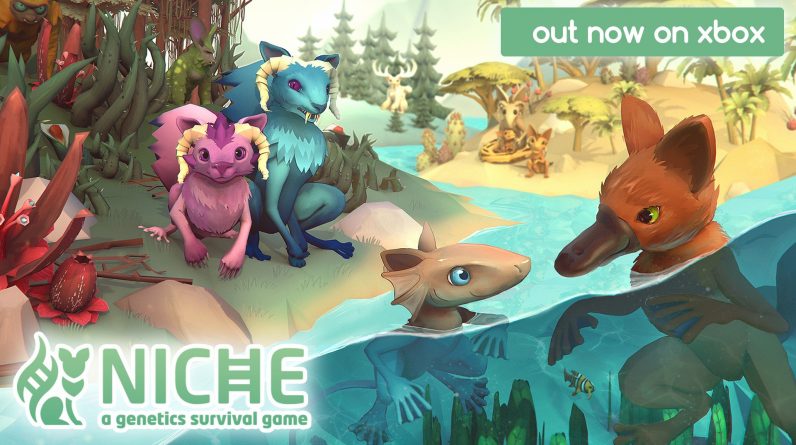 It’s honestly very exciting for me, releasing a game on consoles for the first time.

Niche – a genetics survival game started off as a university project which I kept working on after graduation as a hobby. With Niche, my goal has always been to try and see if biological principles can be turned into a fun game. And since I decided to study game design, but was always a bit sad that I didn’t choose to study biology, I decided to try and mix both of my interests and attempted to make a game about population genetics. After starting to post about the project, I soon realized that there are many gamers who share my interest in biology, animals, and evolution. Cat, horse, and dog breeders joined the game’s community and made sure to scold me if I got the game’s genetics system wrong.

At the same time a development team started to form around Niche and we decided to try our luck and launch a Kickstarter. With the help of our community and coverage from various science websites, we managed to surpass our funding goal and started to work on the game of our dreams together. After it’s initial release on PC, we kept improving and expanding the game for several months. And now Niche is finally coming to consoles. What an interesting journey it has been!

Niche – a genetics survival game is a single-player simulation/strategy game. You become the leader of a pack of mammal-like animals and try to survive against all odds. This is no simple feat, since the game world is crawling with dangers, such as predators, sicknesses and changing climates. Niche features a breeding system, based on real genetics, 5 different biomes to explore and procedurally generated worlds and animals with over 100 different genes to shape your own species.

In the sandbox mode, players can create their own kind of challenges with a variety of custom settings. In story mode, players experience the story of Adam, a little Nicheling cub that is captured by a bird of prey and just barely escaped being eaten. After his escape Adam finds himself on a foreign island, far away from home. Venture from island to island, escape carnivores, find new mates and adapt to increasingly dangerous biomes. Find your way back to your old tribe while building your own, genetically unique, family.

One of the main inspirations for Niche is the Warriors series, a novel series about wild cats, surviving in the forest. I’m also a huge fan of Don’t Starve, Spore, and The Creatures Series, which all helped me to envision what Niche could become when I was first starting out.

I hope this post helped you to get a basic understanding of what Niche is and what drove me and my team to make this game. If you like cute animals, genetics, and survival games, this is the game for you. Niche is is available now on Xbox One!

PS: If you know any science teachers, the PC game is available for schools free of charge.

Niche – a genetics survival game is a fresh blend of turn-based strategy and simulation combined with rogue-like elements. Shape your own species of cat/fox/bear/dog-like animals based on real genetics. Keep your animals alive against all odds, such as hungry predators, climate change and spreading sickness.

Educational aspects:
While playing Niche, the player is introduced to the scientific mechanics of genetics (featuring dominant-recessive, co-dominant inheritance, etc). The game also features the five pillars of population genetics (genetic drift, genetic flow, mutation, natural selection, sexual selection). All knowledge is interwoven with the game-mechanics. This creates the effect of learning by playing.