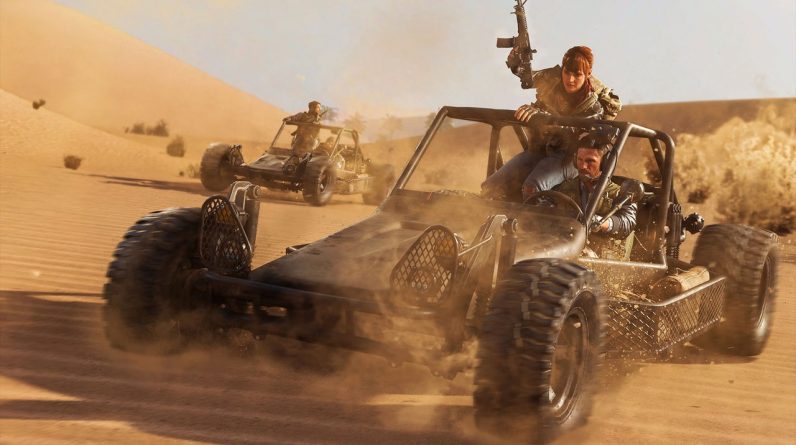 Progress! On the whole, Cold War’s multiplayer is a more balanced and smoother gameplay experience in the Beta when compared to the uneven Alpha from last month, with tweaks to movement and weapons going a long way. The new map and modes that have entered the mix don’t all hit as well as I’d like though, and that further drives home the point that the Black Ops series is at its best when sticking to its core, stripped-back principles.The most welcome change from the Alpha has been the noticeable nerfing of snipers. It’s great to be able to run 10 yards across the dunes of the Satellite map without being picked off by one of many waiting marksmen. Sniper rifles are now only one shot kills if a headshot or upper torso bullet lands, which instantly gives a better balance to the class. This has led to fewer snipers on the battlefield and thus naturally encourages a more run’n’gun approach to matches, and that suits Cold War’s map design much better.

Armada has quickly become my favourite of the maps due to the number of different flanking routes available. Moving around the multiple hulking ships is a more fluid experience thanks to ziplines feeling snappier and consistently more responsive when triggering. Thankfully, the smaller, pilotable boats now take considerably less damage to destroy and no longer require you to unload all of your ammunition into them to produce results.

Armada has quickly become my favourite of the maps due to the number of different flanking routes available.

This map, combined with the new Assault variety of Combined Arms (the large-scale, 12v12 mode) has made for my most consistently fun time with Cold War so far. Assault differs from Domination in that both teams are only fighting for control of one point at a time rather than 5 simultaneously, but it moves around the map. It’s fairly similar to Hardpoint and just makes for more exciting encounters as both sides are forced into one area instead of being spread out into small pockets of action.

The same can be said when playing on the new map introduced in the Beta, Cartel, which is set in the Nicaraguan jungle. It’s a fun map at times, especially when playing the larger Combined Arms modes, but isn’t without its faults. Most prominent of these being that it falls afoul of the same feeling of emptiness that maps like Miami and Moscow evoke when playing any of the 6v6 modes. It’s simply too vast for that few players to be operating in and often results in running loops of the same areas before being picked off just as you see an enemy. This leads onto another one of the faults with this map, which is an issue that bleeds into Cold War in general.Cartel is the only map I’ve encountered so far where camping is an active issue. Sure, you’re always going to have people who like to play that way in Call of Duty, but on the whole Treyarch have done a good job at making this difficult on most of the maps. In Cartel, though, there are many, many bushes to hide in and many, many players who seem to enjoy doing it. They’re so prevalent that at times I’ve just chanced my arm and thrown explosives into the undergrowth or sprayed bullets across the shrubs, and I’ve gotten hit markers more often than you’d imagine that way. This, coupled with the general lack of enemy visibility, at times can make for a frustrating match; while this doesn’t occur on every map, it can just lead to you shooting below red enemy nametags more than detecting the bodies themselves. That’s not my favorite way to play.

The general lack of enemy visibility, at times can make for a frustrating match.

Along with a new map, a handful of new modes have been thrown into the mix with the Beta. VIP Escort is a tactical departure from the norm and requires a level of teamwork not often associated with CoD multiplayer. One team member is designated as the titular VIP and must make their way to one of multiple extraction zones in order to win the round while their teammates protect them. Rarely does a match ever make it to the final stage, though, as one team is almost always wiped out before the objective can be met. It’s not a mode I can say I enjoyed too much, partially because of all the flashbacks it caused in my mind to playing Hostage in Rainbow Six Siege (a mode that, incidentally, is rarely ever played when compared to others in that game).

Another big new addition is Fireteam: Dirty Bomb, a sort of Frankenstein’s monster mashup made up of mechanics from Warzone and a healthy sprinkling of Battlefield-sized action. Essentially a smaller scale version of Warzone’s Plunder in which cash is replaced by uranium, 10 teams of four players battle it out to reach the top of the scoreboard by depositing the radioactive element in different bomb locations, detonating the dirty bombs, and of course, getting kills. Vehicles are also dotted around the map along with boxes containing killstreaks, and the armour system from Verdansk also makes its way over. The problem is that none of it really comes together like it does in Warzone and each round regularly ends up being a bit of a mess.The time it takes to actually detonate a bomb is excruciatingly long and at times feels impossible to complete as the enemies rain fire down on you from every direction as they freely parachute without warning. It may be down to the relatively small size of the map when compared to Warzone but it rarely feels like you have time to actually complete the main objectives, which is a bit of a problem to say the least when they are your primary source of points. Maybe a slightly longer respawn delay would aid this or a decrease in the detonation time, but at the moment it isn’t quite clicking for me. There is, of course, time to fix these issues (that’s the point of a Beta after all) and I can see myself playing this mode with my Warzone squadmates when the full game releases if it all comes together.

That being said, Cold War is at its best for me when it sticks to providing fast-paced action and satisfying gunplay on maps that (mostly) encourage a run’n’gun approach. Not all of the new map and mode additions quite hit the mark with the Beta, but the general feel and balancing of the multiplayer feels in a much better place than it was just a few weeks ago. So far, Cold War is shaping up to be a divisive entry into the series for fans of Call of Duty multiplayer, with the thin line between an old-school feel and an outdated one still being walked precariously. All in all, I’m enjoying it currently and am hopeful based on what I’ve played, although it still feels a tall order for Cold War to wrestle my time away from Modern Warfare and Warzone in its current state.

After spending the weekend with Black Ops Cold War’s multiplayer Alpha on PlayStation 4, there’s plenty to be excited about in the next Call of Duty – but I’ve seen equally as many things that have given me reason to be wary. The gunplay is solid and familiar, offering heavy bursts of nostalgia with each pull of the trigger, but I wonder if there is too much looking back going on in Cold War and not enough emphasis being placed on revolution. With longer time-to-kill, a visual downgrade, and a return to simpler map designs, it remains to be seen if this year’s Call of Duty is a backwards or forwards step for the series.

I feel much more at home in a Team Deathmatch setting, or playing a personal favourite of mine: Gun Game, which was first seen in the original Black Ops. Sadly the latter wasn’t available in the Alpha despite its Treyarch pedigree, but I did manage to play a healthy amount of Deathmatch on the three smaller maps available. My early impressions of each of these are that they are solid, if not spectacular. The urban Miami and Moscow maps harken back to old-school Call of Duty map design with clear corridors and lanes to fight in, with no doors to open and limited verticality.

The third map, Satellite, is my pick of the bunch, and where I found the majority of my fun.

The Miami map offers an appealing visual identity complete with a neon-lit beachfront and glowing pool, while Moscow is swamped with stern architecture and bountiful busts of Lenin. I enjoyed my time in them, but felt they suffered from similar issues to their larger counterparts as they just felt empty at times because they’re almost too large for the 6v6 game modes they house. The third map, Satellite, is my pick of the bunch, and where I found the majority of my fun coming from as I picked off enemies with my sniper rifle as they peeked over yet another Angolan sand dune. It stands alongside Armada as the most graphically impressive map of the Alpha bunch, and benefits from the rural setting in this regard as the sun beams on crashed wreckage and drenches the already orange rocks, but on the whole Cold War currently looks to be a significant visual downgrade when compared to Modern Warfare. This is most visibly seen on the Moscow and Miami maps when looking at the textures of the building faces and in the detail of the gun models, which just don’t stand up when placed next to polished weapons from last-years outing.Although my time with Cold War has been limited so far, I have reasons to be hopeful that Treyarch is recapturing some of what hooked people on the original Black Ops back in 2010. I’m a little wary of some aspects being stripped back a bit too much in an effort to please those yearning for an experience almost 10 years old at this point, but I’m definitely looking forward to seeing what innovations the developers have yet to show, and indeed how Cold War will tie into Warzone. With some weapon balancing on the way, and hopefully more maps and modes available during the upcoming beta, I’ll have a better understanding of which way this year’s multiplayer is heading. There’s a very thin line between a nostalgic experience and an archaic one, and it’s a line that Cold War is carefully dancing on at the moment.
Simon Cardy can’t wait to play more Black Ops, but for now will have to settle for getting 2nd place finishes in Warzone of which he occasionally posts clips of on Twitter at @CardySimon.