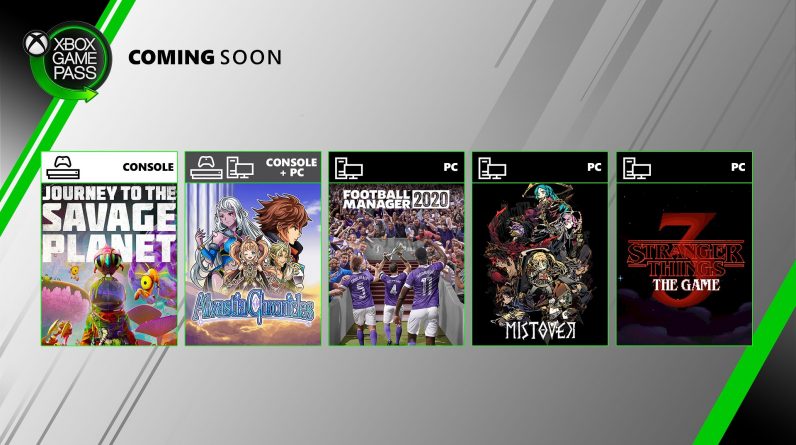 Thanks for tuning in and seeing our Xbox Game Pass update on Inside Xbox. We’re back with our monthly update… while we’re inside. Stay home and stay safe, friends. Let’s jump in!

In case you missed it, we added a couple of new games already this month, and per the usual, we have more coming soon!

NieR: Automata Become as Gods Edition – Available Now
Invaders from another world attack without warning – unleashing the machine lifeforms. To break the deadlock, a new breed of android infantry is sent into the fray: the YoRHa squad. Highly-acclaimed and award-winning NieR:Automata is a fresh take on the action role-playing game (RPG) genre that gracefully blends mesmerizing action with a captivating story.

Alvastia Chronicles (ID@Xbox) – April 9
Set out on an adventure in a retro-styled world in this RPG with over 100 companions! Two siblings Alan and Elmia start their journey to avenge their parents’ deaths as they fight to stem the tide of monsters flooding into the world and restore peace to Alvastia. Engage in heated turn-based battles with up to 13 party members. Weapon upgrades, a battle arena, and quests are only the beginning of what this Kemoc RPG has to offer!

Journey to the Savage Planet – April 9
Welcome to the Pioneer Program! In this upbeat and colorful first-person adventure game you play as the newest recruit to Kindred Aerospace, which proudly touts its rating as the 4th Best Interstellar Exploration Company. Dropped onto an uncharted planet with little equipment and no real plan, you must explore, catalog alien flora and fauna and determine if this planet is fit for human habitation. Onward to adventure! Good luck – and mind the goo!

Overcooked! 2 (ID@Xbox) – Available Now
Overcooked returns with a brand-new helping of chaotic cooking action! Journey back to the Onion Kingdom and assemble your team of chefs in classic couch co-op or online play for up to four players. Hold onto your aprons … it’s time to save the world (again!)

Football Manager 2020 – Coming Soon
Every decision counts. With new features and polished game mechanics which reward long-term planning and progression like never before, empower managers to develop both your club’s culture and your youth team’s prospects, as well as your own unique managerial identity.

Alvastia Chronicles (ID@Xbox) – Coming Soon
Engage in heated turn-based battles, upgrade your weapons, fight in a battle arena, and embark on epic quests in this retro-styled JRPG. Guide siblings Alan and Elmia as they start their journey to avenge their parents’ deaths, fighting to stem the tide of monsters flooding into the world, and restore peace to Alvastia.

Mistover (ID@Xbox) – Coming Soon
A ”Mist-ical’ RPG with expeditions for finding the key to survival. Choose your next step wisely and keep in mind that your every move will change the future. Create your own ‘Corps’ and explore through various regions in the Pillar of Despair: forests, lakes, mountains, cities, cathedrals, castles, and much more.

Donate to the CDC Foundation by Playing Xbox

We recently announced, that Xbox One owners in the U.S. will see on the home screen of their Xbox One, within the Microsoft Rewards app, and the Xbox Game Pass page of the dashboard a button to benefit coronavirus response efforts by easily donating to the CDC Foundation. Hit the CDC Foundation button to tell Microsoft you want to donate your Rewards points to the CDC Foundation, then Microsoft will match your donation one-to-one. 1,000 Rewards points is equal to $1 donated. Xbox One owners can earn Microsoft Rewards by (but not limited to) completing the limited time “Do Your Part From Home” punch card, playing select new Xbox games and completing Xbox Game Pass Quests, renting and purchasing movies and TV through the Microsoft Movies & TV app, exploring new content and entertainment apps, and shopping through the Microsoft Store on their Xbox.

In case you missed it, this week is Free Play Days! We’re all looking for more ways to play with our friends, and this week it’s easier than ever. From April 6 to April 12, all Xbox Live Gold or Xbox Game Pass Ultimate members can play a bunch of games online with your Gold friends during Xbox Free Play Days:

Don’t forget, we recently added Perks for Xbox Game Pass Ultimate members and are delivering regular content drops – including new perks since we first announced the program! Right now, on both PC and console, you can get 5,000 MyTeam points and 30 skill boosts from NBA 2K20, an Xbox Starter Bundle with credits and more for Warframe, and a monthly bonus pack for Phantasy Star Online 2. Plus for those who haven’t grabbed them yet, you can still get an Ori inspired hull, flag, sail, and figurehead in Sea of Thieves, a 5-God bundle pack in Smite, and 3 free tanks in World of Tanks! And more to come regularly!

We always love to play games and are sad to see these go on April 15. If you want to keep the fun going, you can use your member discount to purchase any of these games before they leave for up to 20% off!

You still with me down here? Hi! I award you 5 totally imaginary made up but you should feel good about yourself points for sticking with me! I would say you could redeem the imaginary not real points on Twitter and have us send you a gif of our favorite game for that moment, but we’ll do that even without imaginary points. You can also keep up with our news, shower thoughts, or just pretty pictures on Instagram.

Until next time friends, stay home, stay safe, and game on!

Get all the benefits of Xbox Live Gold, plus over 100 high-quality console and PC games for one low monthly price. With games added all the time, there’s always something new to play. With a huge variety of games from every genre, there’s something for everyone. Enjoy exclusive member deals and discounts. . Plus, enjoy free perks, including in-game content, consumables, and partner offers. Play together with friends on the most advanced multiplayer network and discover your next favorite game.

Game titles and number vary over time and by country. Membership continues to be charged at the then-current price (subject to change; plus applicable taxes) unless cancelled. Cancel any time to stop your next scheduled charge; see account.microsoft.com/services. Notice before purchase of add-ons, DLC, consumables, virtual currency, or subscriptions (sold separately): If your membership terminates or a game is removed from the catalog, you must reactivate your membership or buy the game separately to continue using these items. ISP fees may apply. Age restrictions apply. Xbox Game Pass discounts are based on Microsoft Store price and are not combinable with other offers and are not redeemable for cash. Discount offers exclude titles within 30 days of launch and are not available with select titles. Number and content of Perks vary by region, platform, and over time, and must be redeemed by stated timeframe. Service, features, and requirements may change or be retired. Subject to the Microsoft Services Agreement (microsoft.com/msa). For PC: App download, Windows update(s), and storage required (xbox.com/pcgamesplan). System requirements vary by game; performance scales with higher end systems.

Sign in for your available offers. Promotional offers may not be valid for all members and are only available for a limited time. Offers not valid in Quebec and Russia; other geographic restrictions may apply. After promotional period, subscription continues to be charged at the then-current regular price (subject to change), unless cancelled. Plus applicable taxes.