Home Gaming News Crash Bandicoot 4: It’s About Time Hands On Preview – When Past and Present Collide 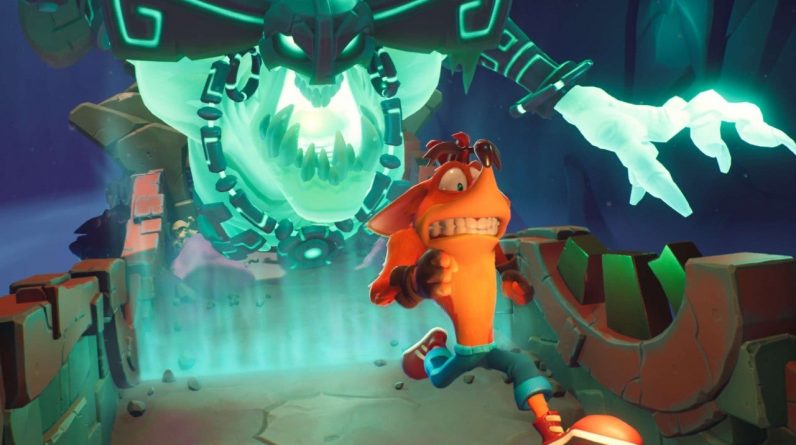 Crash Bandicoot 4: It’s About Time is canonically set after the events of the third game, Crash Bandicoot: Warped. Despite the slew of main series Crash games that have come out since then, it arrives nearly 12 years later. Knowing that, the subtitle “It’s About Time” makes perfect sense.I grew up playing the original trilogy and enjoyed my nostalgic romp through the remaster. It was fun (and frustrating) to retread those familiar levels again with a fresh coat of paint, but it was a reminder of how far games have come since then.I didn’t expect the N. Sane Trilogy to push the series forward, but it did raise the question: What would a contemporary Crash Bandicoot game look like? After my hands-on time, it looks like Crash Bandicoot 4: It’s About Time might strike all the right chords.

It has all the familiar markings of the first three games: linear level design that demands precise platforming skill and a plethora of collectibles, crystals, and secrets to uncover. But with a few meaningful iterations to the formula such as noticeable improvements to gameplay and level design, fresh mechanics like Quantum Masks, timelines, and new playable characters, and vibrant new worlds with some seriously stunning environments.

Crash Bandicoot 4’s story is as on brand as it gets: Doctor Neo Cortex and N. Tropy have escaped from their interdimensional prison but not without wreaking havok and ripping a gaping hole through the fabric of space and time. Once again, the evil scientists embark on a mission to take over the multiverse while Crash and his sister Coco do everything in their power to stop them.

It’s undeniably Crash but if you’re anything like me, a completionist who wants to collect every single gem, you probably won’t be paying too much attention. That’s because you’ll be busy falling to your death an innumerable amount of times while trying to smash every box and collect every bit of Wumpa fruit through gritted teeth. Yes, Crash Bandicoot 4 feels like it will retain the series’ signature difficulty and maybe even crank it up a notch or two.

This was most noticeable in the level “Snow Way Out”. This arctic fishing village has six gems and it’s filled with icy hazards and plenty of rickety wooden scaffolding to keep you on your toes. Undead pirates with hooks and arm cannons that shoot out swordfish like harpoons are loitering about but these predictable foes are the least of your worries.The most perilous platforming of my playthrough took place at a freezing river where I had to use sheets of ice to travel up and down stream. These moving platforms alternated between comically slippery to so fragile they crumbled under Crash’s feet if I stood there for too long.

If I wasn’t hellbent on trying to break open every crate in the level to get my celebratory gem, I would’ve only had to survive this death trap once. But after hitting an “!” crate, which activated ghost crates, I was compelled to backtrack up the river to break those newly materialized crates, thus testing my ability to make it across the same treacherous area more than once.My death count quickly added up and my patience did wear thin — but I wanted to keep trying and eventually I did succeed. Crash fans will be used to this type of punishment and it’s very clear Crash Bandicoot 4 is intentionally targeting that demographic. Newcomers or those used to a more simplified platforming experience might be deterred. Luckily, the game tries to address this added difficulty with two modes: Modern and Retro.

Retro mode, like the classic games, limits your tries to the number of lives you have, which is a nice option if you’re someone who wants the classic experience. Modern mode, on the other hand, gives players unlimited chances to finish a level, only taking you back to the last checkpoint after you’ve died. It replaces Extra Life Crates with Golden Wumpa Crates, and also adds a nice little death counter in the corner of the screen. I enjoyed having the option of Modern mode as it made the higher difficulty of certain areas a lot more tolerable. I was able to keep trying and improving without the frustration of having to start all over again.

Tweaks to physics in the N.Sane Trilogy made Crash Bandicoot feel stiff and it amplified the difficulty in ways that felt unfair. In Crash Bandicoot 4, Crash’s movements are fluid and jumping no longer feels like you’re being weighed down by an invisible sack of potatoes. He also has all of his signature moves along with some fun, new abilities temporarily granted with the help of Quantum Masks. Unlike Aku Aku, Quantum Masks aren’t found in boxes. Instead, they materialize in areas where their powers can be put to use, transforming into a suit Crash wears.Snow Way Out introduces the mask “Kupuna-Wa” which gives Crash the ability to slow down time. The first time I used Kupuna-Wa’s power was after hitting a red exclamation crate that activated ghost crates inside nearby areas outlined in red. The red exclamation crates are active for a very brief moment and Kupuna-Wa’s ability only lasts for a few seconds. Pressing triangle or R2 right before hitting the switch allowed me to run over and smash the boxes before they quickly disappeared but getting that timing right took a few tries.

This timing became even more important when I had to use Kupuna-Wa’s ability to cross a giant icy chasm. The only way across was to slow down time and use a couple of falling glaciers as platforms. If I activated the powers too soon or too late, the glaciers wouldn’t be at the right height needed to make it across. If I took too long to hop across then it was straight back to the last checkpoint.

Another Quantum Mask called Lani-Loli has the power to phase objects in and out of existence. He’s introduced in “Dino Dash”, a level overgrown with tropical greenery and poisonous flora that spits out venom and spores that stun. Dinosaurs roam about, some helping Crash navigate across the level’s many lethal heights, and one in particular that poses a major threat, but I’ll touch on that later.Crash Bandicoot can now rail grind, and Lani-Loli’s power assisted me in getting him safely across a long winding vine suspended over a canopy of trees. As Crash began to slide, crates and obstacles showed up in quick succession. The circle button allowed me alternate between hanging below the vine and standing on top of it while Lani-Loli’s power let me phase in crates to break them while phasing out any pesky obstacles that threatened to knock Crash off his path.

With the ability to alter space and time, the Quantum Masks don’t feel too overpowered or overly frivolous. Unlike Aku Aku (whose presence I do think serves a purpose, especially in a game known for its difficulty), they grant powers that require thought and skill to use. I’m interested to see them at work in Crash Bandicoot 4 in the future when I can use them at their full potential.

Dino Dash features a chase segment with a T-Rex (that threat I mentioned earlier) and it requires some very nimble platforming. I ran past Nitro boxes, dodged sporous fungus, slid under prickly vines, and hopped over molten lava. It’s just like the chase segments of Crash games past, but it’s one of those things that doesn’t get old. Platforming using purely reflex and somehow making it out alive will always be so deeply satisfying.

Something new was introduced during this chase and it was a random event that stopped the T-Rex in its tracks. It was the result of an alternate timeline, which offers players a chance to play another portion of a level as a different character and see from another perspective how a certain unexplained event was initiated.

Snow Way Out has an alternative timeline you can play as Neo Cortex, putting you in the lab coat and shoes of the longstanding series villain. At first I was trepidatious about a new playable character thrown into the mix, not only because I wanted Toys for Bob to make sure they got Crash platforming right, but because there’s a thin line between additive new gameplay idea and throwaway gimmick. Thankfully, playing as Cortex is much more the former, so much so that I was initially thrown by how differently he plays.

Cortex only has a single jump rather than Crash’s double, and instead of a spin attack fires his polymorphing blaster at enemies. The first blast turns them into a stone platform, while a second shot reduces them to a gelatinous cube and convenient bouncy surface. Couple this Cortex’s jetpack dash move, and suddenly there’s almost a new but still quite engaging platformer thrown into the mix. Cortex’s portion still required precise timing and a little platforming experimentation, but in a new, rewarding way. – Jonathon Dornbush

Crash Bandicoot 4: It’s About Time is still in development and the demo was of a version of a game that is subject to change. That said, what I experienced feels promising. It has all the appeal of a classic Crash game but with what feels like meaningful additions and improvements. The art style might be the best Crash Bandicoot has ever looked (even better than Crash Team Racing Nitro-Fueled) and the difficulty feels true to the series. I’m excited to see Toys for Bob include two modes but I hope they also consider some more accessibility settings in later versions of Crash Bandicoot 4 so it can be a game that not only appeals to fans but is welcoming to everyone.

Felicia Miranda is IGN’s SEO editor. Talk games with her at @FeliciaVagabond.