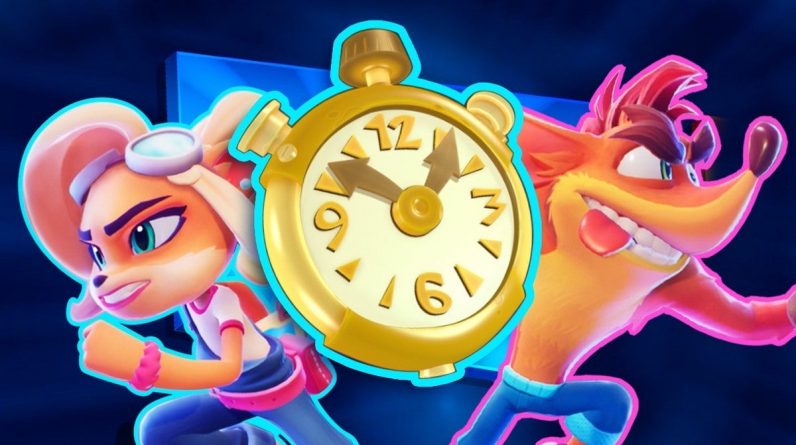 Crash Bandicoot 4: It’s About Time features plenty for longtime fans of the bandicoot’s adventures, new playable characters, the N. Verted mode’s twist on mirror mode, and more. But Crash and Coco have another surprise in store for fans — local multiplayer modes.IGN can exclusively reveal a first look and details on Crash Bandicoot 4’s competitive and cooperative modes. Both modes support two to four local players — no online support is available at this time — with players able to play as Crash, Coco, Fake Crash, and, in her debut, Fake Coco.Here’s everything you need to know about playing Crash with friends at home.

Bandicoot Battle, the name for Crash 4’s competitive mode, includes two games for you to test your skills on: Checkpoint Race and Crate Combo.

Time trials have long been a staple of the Crash Bandicoot series, and Checkpoint Race turns them into a competitive back-and-forth race. Up to four players will compete for the fastest time across a level, but it’s not just about reaching the end-of-level finish line first. As its name suggests, Checkpoint Race is a series of races to each checkpoint crate in a level.

Whoever wins the most checkpoints in a level is the ultimate victor, so if you’re really, really bad at one section of a level, you might still have a shot to come out on top.As you race, you’ll see a ghost of your past competitors working their way through the level to give you a better idea of how you’re faring in the moment. And in staying true to time trials of Crash’s past, crates that freeze the clock for a number of seconds, which are labeled on the box, can be smashed to help give you an edge.

If smashing crates with reckless abandon is more your style, Crate Combo is the mode for you.

Again, the mode measures success from one checkpoint to the next, but speed isn’t the only goal. You’ll want to score the most points by smashing as many crates as possible, because with each success crate you smash the point value of each crate increases, up to 32 points per crate.

And while it’s a bit surreal to see so high a number on a Crash crate, you’ll have to keep your combo up by smashing them as quickly as you can. In the first gameplay, you can see a meter in the lower-right hand corner. If you don’t hit any crates before the meter runs out, the point value resets to one and you have to begin working back up to a higher point value.

Your run ends when either you hit a checkpoint, or you meet an early death, so even if you don’t make it to the checkpoint, keeping up your combo could be the key to victory.

There are no online leaderboards included at this time, and while Crash 4 will keep track of all players’ progress during a multiplayer session, those stats are wiped clean so you can start fresh the next time you play. Especially if you have to find new friends to play with after you win against all of them the first time.

If working together is your preference, players can pass the controller from one to the next in Pass N. Play mode, which allows up to four players to help progress through Crash’s campaign courses.

You can play along with friends either in the standard versions of the levels, or in the N. Verted mode variations, which offer unique spins on every level.Crash Bandicoot 4 will also feature flashback levels to truly test players’ skills, a host of costumes for Crash and Coco to wear that can be unlocked via the campaign, and new playable characters like Dingodile and Tawna.

The sequel, developed by Toys for Bob, will be available on October 2 for PS4 and Xbox One.