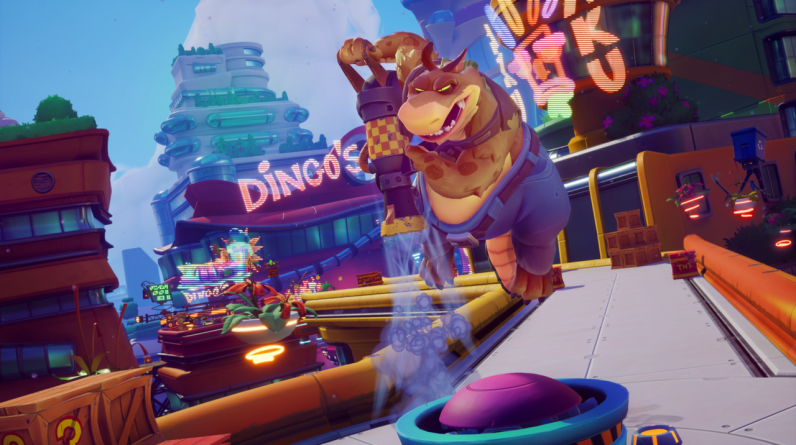 You’d certainly expect to play as Crash in a game named after the bandicoot, but Crash Bandicoot 4: It’s About Time introduces three additional playable characters – Dr. Cortex, Dingodile, and Tawna – on top of Crash and Coco. Each comes with their own moveset and series of levels that test players with unique mechanics within the platforming framework of the Crash series.To coincide with Crash 4’s launch on PS5, Xbox Series X and S, and Nintendo Switch, IGN spoke with Crash 4 creative producer Lou Studdert about developer Toys for Bob’s creative process in bringing these characters to life. From the selection process to determining each character’s mechanical hook and more, read on for a behind-the-scenes glimpse of how Crash 4’s ensemble playable cast came to be.

Who Makes the Cut?

While Crash 4 is a direct sequel to 1998’s Crash Bandicoot: Warped, Toys for Bob certainly understood the entirety of Crash’s history when creating It’s About Time. And so when the topic of other characters to include came up, Studdert explained how it was no easy task to choose for a team full of lifelong Crash fans.

“It’s actually one of the toughest conversations we had at the start of the game, because Crash as a series has this amazingly deep bench of characters. And we had a bulletin board with everyone from the franchise on it,” Studdert explained, namechecking everyone as varied as Crash 1’s Pinstripe to Crash Tag Team Racing’s Willie Wumpa Cheeks. But at the end of it all, gameplay had to be king.

Have you played Crash Bandicoot 4: It’s About Time?

“We could be doing a million different thing [but] we wanted them to feel, gameplay wise, still a part of the core tenants of Crash Bandicoot’s platforming DNA,” he continued, noting a character like Nitrous Oxide wouldn’t make the cut given Oxide’s association with being in a vehicle, and the team wasn’t interested in creating Crash Team Racing-like levels.

“From there we figured out narratively, we wanted each of them to have their own lanes, where you’ve got Cortex, and traditionally he’s evil, he’s the villain, and then you’ve got Tawna, we’ve positioned her as the guardian angel. She’s the good, and then we wanted to have some wild card energy there. And we had the idea of turning Dingodile into the chaotic neutral [figure]. He’s neither good, nor bad. He has a bad past and really he’s just trying to get home and he’s causing mischief along the way.

The three distinct personality types allowed the wider Toys for Bob team to find unique ways to integrate all three both into the Crash 4 storyline as well as into its gameplay rhythms, while still offering distinct opportunities when it came to introducing new platforming mechanics.

Perhaps the most prominent playable character of the trio, Dr. Neo Cortex is a core component of the bandicoot’s history, and so he made sense as a potential inclusion. For those who haven’t played, Cortex doesn’t have a double jump or spin attack, but instead can dash and uses his blaster to zap enemies into stone or jelly platforms, the latter of which can be used to bounce to new locations.

Figuring out what Cortex’s sidearm actually did, though, was something Studdert said went through several iterations.“We knew we wanted to give him his blaster, and we actually struggled for a while to figure out what the blaster did,” he said. “When we were initially building his levels, we had some experiments where he devolved a creature, [but] then we’re like, ‘Oh my god, every single thing we make in the game and levels we put him in, we then have to double the amount of content that we as the studio make to accommodate [everything] being shot at.’”

Studdert of course noted from a production perspective, that would greatly increase the scope of what the team had to accomplish, but also the developers recognized some inherent issues players might have with the idea.

“From a player-information perspective, they then would have to go, ‘Okay what does that do? If I shot the dinosaur and it turned into a baby dinosaur, then what does that mean for me?’ And to have to do that at every single interaction we realized very quickly, “No, no, no, we need to simplify it.’”But the ideas for this transformation blaster didn’t stop there.

“Then it became, ‘Okay…what if you hit it with his blaster and it turned into an object from the game? Maybe I shot a chicken and it turned into a bounce pad,” he explained. “That was funny, but it only sustained itself so long, because you wouldn’t know what you’d get when you hit it and because Crash is such a deterministic game you have to figure out [what to do next],” Studdert explained. He joked that this idea led to the team coining the phrase of a “producer pistol.”

“Someone said to me, ‘Wait, you get to shoot a gun to then reuse content from other parts in the game. Is this a producer pistol?’”

Development jokes aside, the team eventually landed on Cortex’s blaster as players know it, but not without even further refinement. At one point, Studdert explained that there were even three states players could switch enemies among, but ultimately paring the options down made more sense.

And while it might be easier to see the framework for which Cortex would fit into Crash 4’s story, and even gameplay, Toys for Bob’s new take on Tawna is a polar opposite. Featuring a completely different iteration of the character than we’ve seen before, Studdert explained how they took the responsibility of including Tawna very seriously, especially in a series largely dominated by a lot of male characters throughout its history.

“We knew from the start that we wanted to bring a new voice and a new perspective to Tawna,” he said. “We took that task very seriously internally, getting a very cross-functional group of developers to weigh in, different writers. Mandy Benanav on our team had a lot of hand in her flavor and her character and the writing. And the art team brought in different inspirations and the character team did a bunch of different iterations.“We knew early on that we wanted to not just update this character, but really give them a role that they haven’t had a chance to play. Especially also for Coco, it was an intentional part of us as figuring out what this game was, is that we wanted to take these characters [and] break them free from those roles of sidekick or damsel in distress and make them as equal billing co-stars for the game.”

And in deciding what that meant for bringing Tawna more to the forefront of Crash 4, the team inevitably settled on going full “action hero” as Studdert put it.

“What does Tawna look like as Batman,” he said the team asked itself. “We want her to exude confidence and strength and just general awesomeness. And then the art team, experimenting in different looks and different appeals so that way she’s still recognizable… and then using those foundations for us on the narrative development side to figure out, ‘Okay, well, where does she intersect with this story? And how do we also rectify where she’s been in the previous games?’”

Studdert explained how, as evidenced by earlier versions glimpsed in the Crash Bandicoot 4 art book, Tawna had a boomerang before her eventual hook shot, among other iterations. But the team’s plans for Dingodile actually steered them away from that tool.

“Once we realized what we wanted to do with Dingodile, the idea of getting something and bringing it back was already covered by a vacuum,” he noted. But Tawna’s hook shot allowed the team to really dig into Tawna as a mobile character.

“Tawna’s hook shot is less about the combat and the interaction than it is about moving her,” he explained, noting that there might have been some influence from so much of the team playing Sekiro during development.

But as for the third playable character, Studdert explained how Dingodile was a good example in Toys for Bob’s approach to choosing these additions. They could come up with some great ideas, sure, like turning Dingodile into the John Wick of the Crash Bandicoot universe, but if it didn’t narratively and mechanically gel with the rest of the adventure, what was really the point?

“We worked a lot to try and figure out, ‘Okay, where does he go after his diner’s destroyed?’ At one point, we jokingly referred to it as ‘Dingodile becomes John Wick,’ trying to take out all of the bats through all of the dimensions for destroying his diner,” Studdert said. “He’s on a full-on mission of revenge. And he has nothing to do with the rest of the game,” he continued, noting that the narrative team questioning that move actually helped with level design, too, because it didn’t lock those designers into a very specific kind of Dingodile level.

And while Dingodile’s narrative role took some finessing, Studdert explained how the devs early on knew “the general notion of a vacuum” was what they wanted for the character’s gameplay. But, still, there were plenty of different iterations to get to what players ended up enjoying, including some more complex puzzle solving than some would expect in a Crash game.

“We had a bunch of different experiments of how there would be other moves that he could do. We initially had move sets where he could grab a TNT crate and then if he held onto it too long, the explosion would launch him backwards,” he said.

“But because he’s so beefy, it wouldn’t kill him. And so we had these puzzle steps where he’d grab a TNT and then have to turn away from the jump and get launched backwards. It made you feel super smart, but at the same time it just didn’t feel right, because that whole, facing the wrong way and lining up your jump, it was a little too layered.”Studdert elaborated how the vacuum at various point also was used to pull switches, or to pull and launch slingshots, but that these more complex pacekillers didn’t line up with the overall goal of the team: making a great Crash Bandicoot game.

Maintaining pace and ensuring that Crash Bandicoot DNA remains throughout the experience is something I praised it for in IGN’s Crash Bandicoot 4 review, noting how each character felt distinct enough to work in their own spinoff game, but still of apiece with the greater Crash game. And now players on Switch, PS5, and Xbox One can experience that for themselves, while PC players can enjoy Crash 4 later this year. If you’re just diving in, be sure to check out IGN’s Crash Bandicoot 4 guide for tips, tricks, and help finding every last gem.

Jonathon Dornbush is IGN’s Senior News Editor, host of Podcast Beyond!, and PlayStation lead. Talk to him on Twitter @jmdornbush.