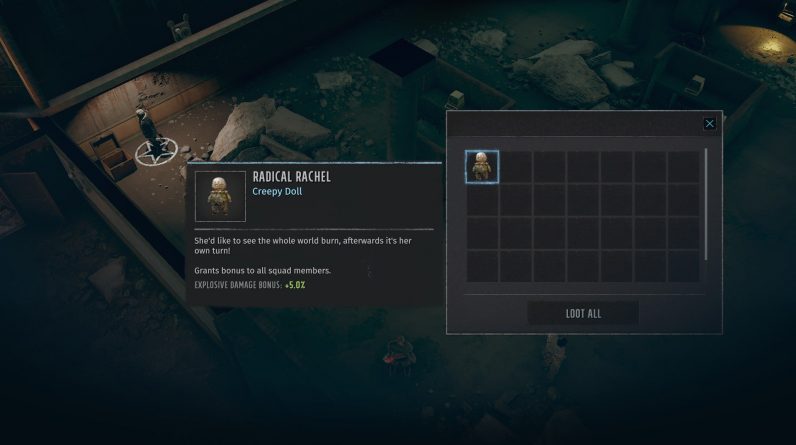 “She’d like to see the whole world burn, afterwards it’s her own turn!”

Radical Rachel is a Creepy Doll located in the Ranger HQ base, your major place of operations in Colorado. To find it, once you gain control of the base and install yourself as commander, head down to the right past the mess hall to the Archives Room – which is full of computer desks and a few beasts. Search the corner of the room to the left of the doorway and you should find a container with the doll.

“Sweet and mousy is her look, but she’s got your secrets in her book!”

Keen Karen is a Creepy Doll located in the Garden of the Gods on the north side of Colorado Springs town. Once you’ve entered the area to fight the Dorseys who have taken over, look for the large battleground near where the Dorsey’s have dumped bodies into a mass grave, and on the left side you can find a large snowpile. Shift the camera to see a path under the snowdrift and on the other side you can find a dirt pile to dig up the doll.

“Dad said they had too many sons, so Maury ate the smaller ones!”

Maneater Maury is a Creepy Doll located on the outskirts of the Bizarre, near the entrance to the parking garage north of the Bizarre entrance. Once you’ve entered the area, head north and right to find a road patrolled by Bomb Bots, and look for a northern path to a metal bridge. Just to the right of this bridge is a small downward slope ending in a dead end with a duffel bag – and inside you’ll find the doll.

“Their armor is useless in a scrap, Lance only needs a tiny gap!”

Lethal Lance is a Creepy Doll located inside the Monster Army Bunker, which is the target of a side quest you can undertake at the Bizarre called Cinema Verite. Once inside the bunker, you can find the doll after you engage in a fight against a few drilldogs and a shockdog.

“Corey has a heartless gaze, but the neighborhood is free of strays!”

Electric Emmett is a Creepy Doll located at the Machine Commune in Denver, Colorado. The doll in question is buried in a hidden spot over by the terminal area’s exit, and is located near some Killer Bots.

“He hates all people with his soul, so he rages like a great asshole!”

Fuckin’ Fred is a Creepy Doll located inside the Old Survivalist Bunker, which you can explore underneath Broadmoor Heights as part of a side quest given by Angela Deth. He’s located in a side room near Clouds-Drifting-West, but the door is locked and requires Lockpicking 8 to reach the doll.

“The shadows come at the end of the day, never blink or look away!”

Nervous Nancy is a Creepy Doll located at the Department of Energy Site in Colorado. Once at this location, look for a group of vending machines and several landmines to find the doll.

“Why even sweat the medical drama if you come back from every trauma?”

Hearty Henry is a Creep Doll located early on in the Aspen region of Colorado where you must seek out Victory Buchanan. Once in Aspen, explore the bunker area that’s full of various loot and a dead body with a duffel bag – inside you’ll find the doll..

“Someone asked why she was pissed, she made them eat her entire fist!”

Ferocious Francesa is a Creepy Doll located in Aspen when working on The Psychopath primary mission. This doll is in a duffel bag container behind the cage that Ranger Rook is being held captive in. This room is in Little Hell within Aspen where a bunch of Breather enemies are outside the door to this cage. Rescuing Rook is a part of the Raising a Little Hell primary mission that will help lead you to this Creepy Doll location.

Zen Zoey is a Creepy Doll located at the Snowed Inn Resort where Nelius Dorsey and his gang are holed up in as part of the Frontier Justice quest. You can find the doll out in the open yard where you have to take on a few Razorback creatures down on the far right side.

“The race goes rarely to the nice, he’ll be the first to make a slice!”

Quick Quaid is a Creepy Doll located over at the Knox Bison Ranch, an area that only appears when taking on the Head Hunter sidequest at the Cannibal Jamboree, and only after you’ve cleared out Aspen. Once at the ranch, you can find the doll around Larry’s grave after dealing with enemies in the area.

“Sweet little fluffs should be protected, nasty mutants should be bisected!”

Purist Patty is a Creepy Doll that can be found at the Abandoned Oil Well – located far south of the Union Station and the Ghost Town. At this location you’ll find a large tesla coil and a bunch of strange people. Attacking one of them will cause a scene to unfold, and upon waking, everything will be gone, except for a helmet and the doll. Spooky.

“Caffeine gives your day a start, ignore the strain upon your heart!”

Hyper Heather is the last Creepy Doll, which is located at the Yuma County Speedway inside Yuma County, of course. Head to the room where you confront Liberty Buchanan, and before directly confronting her, you can find a trapped locker that requires Explosives 8 to disarm – and inside is the doll you seek.