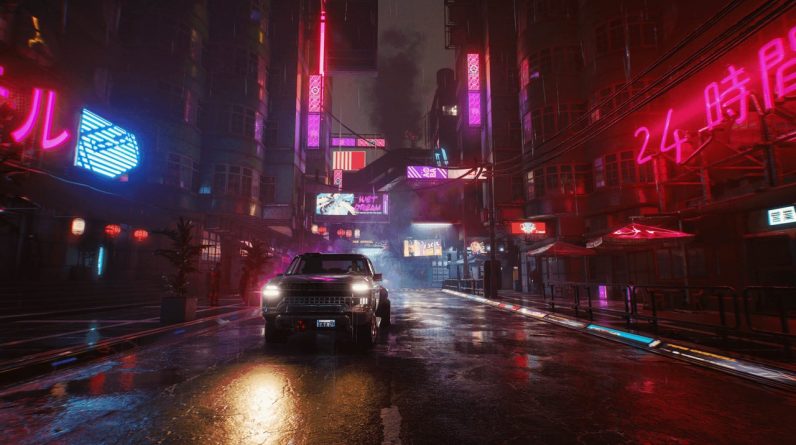 During a Cyberpunk 2077 livestream at Tokyo Game Show 2020, Hiroshi Sakakibara, Environment City Coordinator at CD Projekt Red, shed some light on the design behind the game’s principal location, Night City.Sakakibara is responsible for the visual appearance of Night City as part of the Environment Art team at CDPR, which he said is a somewhat large team of dozens of people that builds the game equivalent of what would be sets and props in a movie. The team is subdivided into three smaller groups – the quest location team which is in charge of creating locations for quests together with the game designers, a team that creates smaller scale items, like furniture and garbage cans, that dot the environments, and the city team led by Sakakibara, which brings Night City to life by designing the streets, buildings and more that you will see in this vibrant city.

When asked for his favorite spot in Night City, Sakakibara said that while just picking one location is difficult, his favorite area would have to be Japantown, an area that can be reached by crossing the canal from Retro China, the area in which protagonist V resides. “Japantown is a vibrant downtown area with many towering buildings, and while walking through the narrow alleys in the area these skyscrapers make it feel like you are walking through a futuristic valley,” he said.According to Sakakibara, entering one of the skyscrapers in the area and then randomly getting off the elevator halfway, and walking the stairs from there is a truly dynamic experience. “You will see details like terrace seating, kiosks and other shops, people hanging out their clothes, somebody sitting at a balcony, a drone carrying goods and more.” Sakakibara said that looking down at the streets or up at the little bit of sky you can see between the skyscrapers is an enthralling experience which will make players realize that they have truly come to a cyberpunk mega city.

But what is it that makes cyberpunk such a unique genre? Sakakibara said that Cyberpunk 2077’s director Adam Badowski repeatedly reminded the team that “an environment filled with things that look futuristic is not cyberpunk, but simply science fiction”. What makes the cyberpunk style special is how it combines retro and futuristic aspects.

“For example, you could have a run down building with an old wooden door, but an LED light might be attached to that door, which could be a part of a high-tech security system,” he said. “Or maybe an old-fashioned diner could have a modern device that allows its customers to make orders.” According to Sakakibara, the team has mixed futuristic elements together with more familiar aspects in order to create an atmosphere that could only be described as cyberpunk.

As for inspiration sources, Sakakibara mentioned that since Night City is located in California, the team looked at cities in California, especially their suburbs. Blade Runner, which Sakakibara called “the bible of all cyberpunk”, has been another obvious source of inspiration, while he mentioned the team has also learned from Japanese anime and manga in the genre, such as Akira and the Ghost in the Shell series. Regarding Night City’s buildings, Brutalist architecture, an architectural style that uses bricks and concrete which emerged in the 1950s, has played an important role in creating Night City as well. The rough and violent style of Brutalist architecture was something that the team saw as a good match with Night City’s suppressed nature, since the city is ruled by a mega corporation.

Sakakibara said that “all the artists have put their everything into each single street and building you can see in Night City, so I hope you will enjoy exploring everything the city has to offer”.