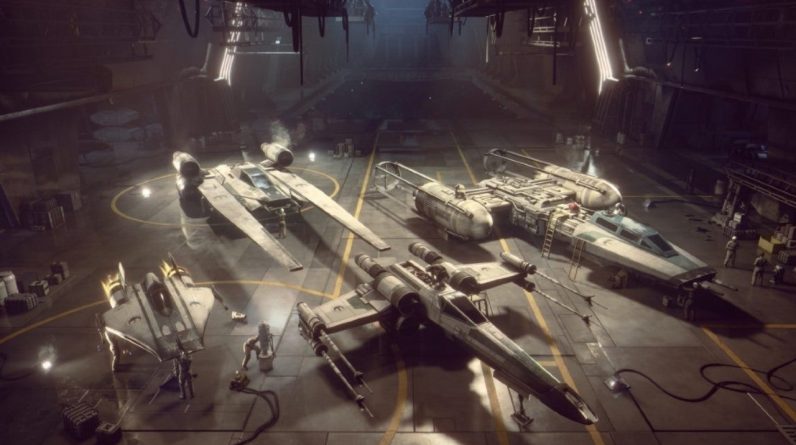 Star Wars: Squadrons will let fans of that galaxy far, far away pilot everything from a T-65B X-Wing to a TIE Bomber, and EA has provided a breakdown of each starfighter, their special abilities, how they differ from each other, and the importance of power management between engines, lasers, and shields.These new details came way by a Star Wars: Squadrons’ Pilot Briefing, and it begins by explaining that while each starfighter will have its own unique handling and functionality, every ship will have “primary weapons, countermeasures, a hull outfitting, engines, and two auxiliary abilities (such as missiles or repair droids), though some starfighters also have shields.”

Power management is supremely important for pilots, as different situations call for prioritizing of certain subsystems. For example, pilots can divert all power to lasers, which will allow them to recharge faster and gain the ability to overcharge lasers for increased damage.

However, with all the power focused on the lasers, the engines and/or shields will suffer and pilots may move slower or have weaker defenses, which could ruin a rushed plan.

As for the other max power abilities, a maxed out engine will allow a starfighter to charge up and use a very powerful speed boost, “not unlike what Poe Dameron used in Star Wars: The Last Jedi.”

Max shield power will allow for overshields, which will provide up to 200% shielding for the front and back of your starfighter for a defensive play.

Not all starfighters have shields, however, and those starfighters can use a power converter to quickly divert all power from lasers to engines or vice-versa.

Star Wars: Squadrons also has options for how to handle power management, and players can switch between a “basic, simplified power management system and a more advanced one that allows them to more precisely control how much power goes to each subsystem.”

Aside from power management, hull integrity (ship health) must also be monitored. Unfortunately, the hull will not automatically recharge like shields, but Astromechs and repair systems can be used to restore a ship. Returning to the hangar in a flagship will also allow for a full repair. Oh, and support starfighters can heal their allies.

Speaking of support starfighters, they can also resupply others in the battlefield. If there is not support ship nearby, flying under an allied crusier or into the capital ship’s hangar will restock your munitions as well.

Standard weapons/lasers don’t require ammo and will recharge, but countermeasures, torpedoes, mines, and other components will have limited ammo.

The Fighter-class (X-wing and TIE fighter) are the most balanced starfighters and are good in most situations, but don’t excel at any one thing.

The Interceptor-class (A-wing and TIE interceptor) are experts at dogfighting and have high speed and powerful lasers. On the flip side, their shields are relatively weak as compared to other classes.

The Bomber-class (Y-wing and TIE bomber) are the slowest class, but they can take a ton of damage and can deal even more. They are ideal for bombing runs on capital chips and leading the frontline assault.

Lastly, the Support-class (U-wing and TIE reaper) are dedicated to helping their allies by resupplying and repairing their starfighters. They can use tractor beams to stop or slow enemies, drop mines, and deploy turrets to help turn the tide of a battle. They are not as fast and don’t pack quite a punch, but there value can not be understated.

Star Wars Squadrons’ creative director Ian Frazier discussed how serious the team took on the mission of recreating these iconic ships as faithfully as possible, while also ensuring for a balanced gameplay experience for all.

A big focus, according to Frazier, was the creation of the cockpits for each ship. There is a push and pull that needs perfected between matching “the aesthetic from the films and incorporating the necessary gameplay information as naturally as possible.”

“This means that when we want to communicate the charge level of your lasers in an X-wing,” Frazier explained. “We design the cockpit instruments for that as if we were Industrial Light & Magic (ILM) building the prop in the ’70s. We don’t say “put a red light there,” we say “if you needed to physically build this using the sorts of parts that ILM had, how would it be built? Is that light a bulb? An LED? How would it be integrated into the dashboard and how would its light interact with everything around it. We ensure the screens are CRTs with appropriately curved monitors, and so forth.”

The TIE fighters proved to be a bit of a challenge because there was “no existing canonical guide [when we started development] as to how exactly those ships are piloted, which meant we needed to figure out the way things like the control yoke actually worked in a very practical sense.”

To solve this, and to ensure the best experience for each ship, the team at EA Motive worked with Lucasfilm, animators, and mocap actors in actual built out cockpits to find the right fit for each starfighter.

This attention to detail goes to another level when the “Instruments Only” mode is turned on. This removes all in-world UI elements and forces pilots to rely solely on the cockpit instruments. It makes the game harder, but provides for ultimate immersion, especially when matched with a VR headset or using a HOTAS setup.

At EA Play Live 2020, Star Wars: Squadrons got its first gameplay reveal and we learned more about its single-player campaign that is set after the Battle of Endor and the destruction of the Death Star II.