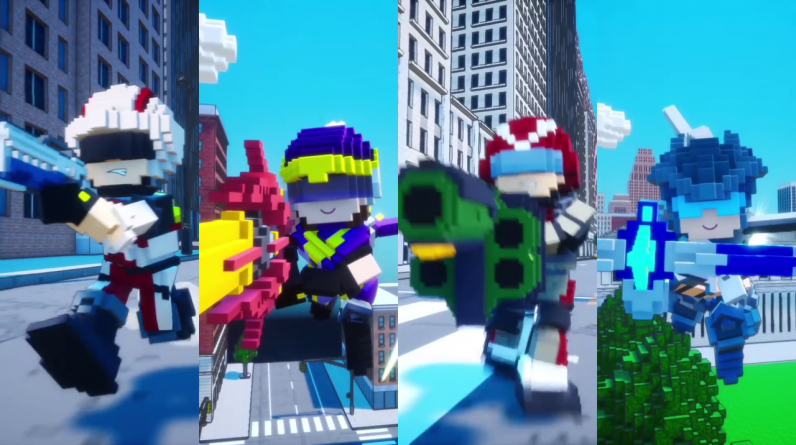 During a special livestream event at Tokyo Game Show 2020, D3 Publisher producer Nobuyuki Okajima outlined what to expect from the upcoming Earth Defense Force spin-off title, World Brothers, and we got a brief look at the fully fledged Earth Defense Force 6.World Brothers will be released in Japan on December 24 for the PlayStation 4 and Nintendo Switch, while an “early 2021” release is planned for other territories. In a departure from past EDF games, which had semi-realistic giant insects attacking the planet, Earth Defense Force: World Brothers is entirely made of voxels. Even the Earth itself is now a cube, or at least it was until the Dark Legion arrived from space and blew it to bits. That was not the end of the battle though; the voxel Earth still exists as pieces floating in space, each segment a tiny environment unto itself.

Okajima played through the game’s tutorial level live on the stream (which you can watch below), where a gruff military commander on-screen explained the above backstory and charged the player with becoming an EDF commander and building their own squad to fight the invaders and rescue what’s left of the Earth. His default soldier was a Ranger but after shooting some ants in Manhattan he found a Wing Diver unconscious on the ground. Rescuing fallen allies adds to your squad: Players can have up to four soldiers in their party and switch between them instantly with the D-pad.Earth Defense Force: World Brothers will include “over 100” different characters, including a variety of fighters from past EDF games such as Jet Lifters, Air Raiders and Fencers. Given the theme of this new game, there will also be a variety of new “brothers and sisters” based on cultures from around the globe (sorry, cube) who can become allies. Okajima showed still images that included a Cowboy Brother with a six-shooter, a Pharaoh Sister carrying an ankh, and a masked El Dorado Brother from South America.

Every character in Earth Defense Force: World Brothers has their own ability (mapped to the L2 button on PS4). For the Ranger, it is a dodge roll with a brief cooldown timer. For the Wing Diver, it is a jetpack that allows limited flight. Given that the Earth is in pieces, it is possible to fall off the edge of the stages in World Brothers, so Okajima recommended always including at least one flyer in your party to avoid plummeting into space.

Okajima also showed how multiplayer works in Earth Defense Force: World Brothers. Online play supports up to four people at once, each controlling their own squad. On PlayStation 4, offline splitscreen play for two players is available, but Switch players must each have their own console and copy of the game to team up with friends. A special “double enlistment pack” for Switch will be sold in Japan bundling two copies of the game together at a slight discount for this reason.

With the boxy visuals that are clearly reminiscent of Minecraft, Earth Defense Force World Brothers is a kid-friendly version of the 17 year old bug-shooting franchise. With that history in mind, Okajima hopes that World Brothers can be a game that is both welcoming to beginners and “nostalgic” for established fans. He pointed out that people who grew up with EDF might be parents by now and suggested that playing World Brothers together could be a family activity – though he stressed that the game is not explicitly “a kids’ game” (in Japan it is rated B, making it ideal for “12-year-olds and above”).

The stream ended with a brief discussion of Earth Defense Force 6, the next proper sequel in the series which is slated for 2021. Early screenshots were shown, which you can see above, and Okajima explained that Earth Defense Force 6 will take place three years after the events of Earth Defense Force 5, which came out for Steam and PlayStation 4 in 2017. Civilization has almost entirely collapsed and the human race is near extinction. There are so few people left that anyone can be a member of the EDF, not just soldiers.

After the official TGS presentation ended, Okaijima appeared on a segment of D3 Publisher’s own livestream (guest starring famed video game pitchman Takahashi Meijin) to show actual gameplay footage of Earth Defense Force 6. While no platforms for EDF6 have been announced yet, he appeared to be playing the game with a DualShock 4 controller.

On screen, the Earth was indeed in total ruin. Okajima played as a character in full military gear, but some of his squadmates were civilians wearing normal clothes and talking about their past professions. With the invasion of Earth supposedly completed, he and his team were on patrol looking for aliens who were left behind on Earth by their fleet. They eventually found some giant frogs walking amongst the rubble and a battle began.

Coming after the bright and colorful aesthetics of Earth Defense Force: World Brothers, watching EDF6 in action is jarringly different. It’s not “realistic” because the aliens look like giant frogs, but when hit they bleed, and hits to their limbs can sever their arms or legs. These enemies are much smarter than the drones seen in World Brothers: They have weapons of their own and, rather than charging at the player, they tend to run for cover behind fallen buildings. However, Okajima showed that using a rocket launcher can demolish what’s left of the scenery, so the aliens couldn’t hide for long.

When asked about the release date of Earth Defense Force 6, Okajima said that the game is still in development and expressed his hope that it would be finished in 2021. However, he warned that it would not be early in the year and might be “closer to New Year’s”.