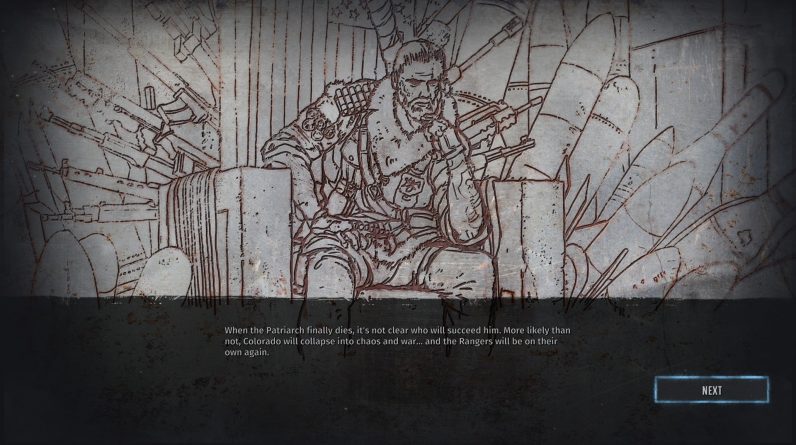 If you side with the Patriarch against Angela Deth, you’ll eventually have to arrest or kill Deth in the Promises Made, Promises kept primary mission. If you want to resolve the situation peacefully, you’ll need to have the Hard Ass (10) and Kiss Ass (10) skill levels to do so. Regardless of whether you arrest or kill Deth, this ending will be the same.

After you’ve dealt with Deth, the Patriarch will ask whether you’d like to stay in Colorado or return to Arizona and help rebuild. If you choose to return to Arizona, the above image will be in your epilogue. However, if you choose to stay in Colorado, the Patriarch will trust the Rangers with picking his replacement when he passes.

This will lead to a tremendously different epilogue than siding with the Patriarch. This ending depends primarily on which decision you pick here. If you choose to keep the Rangers in Colorado, you can invite General Woodson over and take over the region. The Rangers will rebuild and do what they can to keep the peace in Colorado.

When you finally find Liberty Buchanan during The Traitor mission, you can convince her to let you become her new army using Kiss Ass (10). This will end Wasteland 3 immediately giving you a bad ending where the Arizona Rangers struggle to survive.

If you kill the Patriarch before completing The Traitor mission, you’ll get a bad ending that leads to Colorado falling into chaos. To get this ending, go to the Patriarch Palace in Broadmoor Heights where the Patriarch is on his throne inside. Prepare to kill him in as few turns as possible, because there are a ton of strong guards and turrets nearby ready to attack you in response.

So long as you kill the Patriarch, it doesn’t matter if your party gets completely killed. Wasteland 3 will show a death screen that shortly switches to the ending song, Patriarch death ending, and credits. This ending leads to Liberty Buchanan taking over Colorado with her gangs. Also, the Rangers disappear to the east with rumors forming about what happened to them.

So long as you’ve rescued Ironclad Cordite from the Old Survivalist Bunker, you’ll have access to this ending. Add Cordite to your party as a companion and bring him to The Traitor primary mission, when dealing with Liberty Buchanan. After making a decision regarding Liberty, Cordite will ask if you’d like him to bring his gang to the city. Deciding to do so will lead to a unique ending when defeating the Patriarch in the alternate final primary mission, Gangs All Here.

When you finish fighting the Patriarch, he seems to kill himself. Then, you can decide whether the gangs pillage Colorado Springs or not. This will provide varied epilogue endings based on your choice. Afterward, Cordite invites you to come to Kansas with him and his gang. This also adds more unique lore where the Rangers help lead his gangs in Kansas.

The Studio Head at InXile Entertainment, the team behind Wasteland 3, tweeted that there’s a secret ending for cheaters. Even though he directly referred to it as a, “special one for hackers”. This seems to be an ending for killing the Patriarch when you first meet him at the Ranger HQ. From what people are saying, this likely plays the ending song and has an extremely short epilogue compared to other endings.