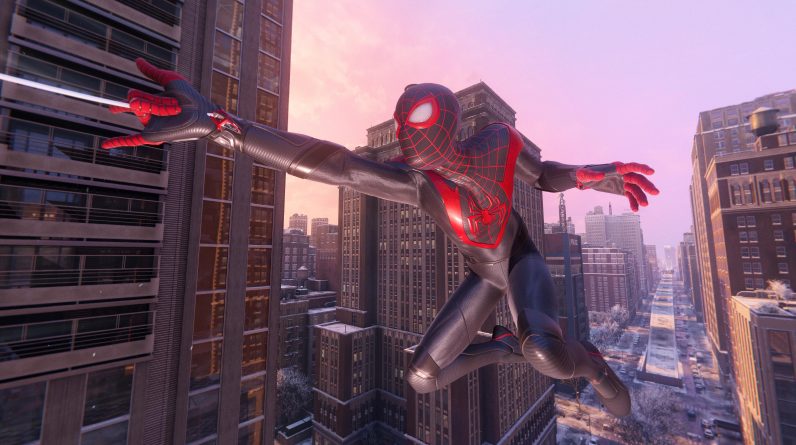 These tips might be familiar to fans of the previous game, but they’re worth keeping in mind while playing as Miles all the same.

Most of your time in Manhattan will be spent web-slinging from building to building – and as you get used to the controls, you’ll want to maximize your speed and traversal.

Remember that when jumping past rooftops, Zip to Point and Point Launch are better when there’s no buildings above you to swing from – and can let you cross roofs quickly in places like Greenwich or Hell’s Kitchen. Always look ahead when moving to spot the next point you can zip to, and use Web Zip to gain that extra forward boost to the next rooftop.

When in downtown areas with bigger buildings, you’ll find that pressing the jump button after a full swing lets you gain more height, momentum, and a bit of focus for your meter. You can also skim fairly fast across the streets by holding the swing button near the ground and tapping jump to gain small boosts forward at the same time.

Fight In The Air

Aerial Combat is literally the best thing you can do. If you can keep enemies in the air, most of their friends can’t touch you – and you can still dodge anyone who can. Make sure to take on combat challenges to unlock the Air Marshall skill early on and increase your damage output and focus generation in the air.

Prioritize Air Launch, Swing Kick, and Air Yank so you can deal more damage and gain more focus in the air without getting attacked, and zip to far away opponents if needed. Aerial attacks can also set you up to knock enemies off rooftops – as Swing Kicks deal knockbacks, and you can press the jump button during aerial attacks to bounce off them and send them flying.

Once you fight enemies who can yank you out of the air, your priority should be taking them out first – this is the best times to use Web Throws or Perfect Dodges to stay grounded but alert.

How to Get More Activity Tokens

Each type of Crime can have up to two sub-objectives for more tokens, and they will be the same when that same type of crime reappears elsewhere in the city.

Any sub-objectives not completed will carry over – meaning you can earn 1-3 per tokens per crime, though once a sub-objective is completed, it cannot be redone the next time that crime type appears, and you’ll only earn the base token for stopping the crime.

For more tokens, make sure to use the Friendly Neighborhood Spider-Man App to take on quick tasks or longer side missions to earn plentiful amounts of tokens, and hunt down other side objectives like Sound Samples, Enemy Bases, and more.

The Difference in Web Throws

A lot of combat will probably involve Web Throws, and it’s important to note that they behave differently on ground or in the air.

Ground web throws have a slower wind up swing that can leave you vulnerable unless you have the Hazard Zone Skill. Once you have Hazard Zone and even Spin Cycle – you can keep enemies from getting close if you can get through the initial wind up without getting hit – but you may have to dodge and lose your projectile in the process if you don’t time things right.

Don’t have time to fully grab an object and swing it before you get hit? It may still be worth doing – once you press L1 + R1, the object will slide in your direction in preparation for the throw, but if you were to suddenly dodge and release your hold – the momentum of the object can still slam in a straight line into anyone in its path!

Wrapping up the Competition

Even more important than throwing enemies is webbing them up. Webbed enemies will stick to almost any surface, as long as you give them a push in the right direction. Three shots from the Web Shooter will make basic enemies sticky, and enough extra shots, or swing kick into a wall, car, or non-destructible surface will stick them permanently. Since Miles doesn’t have gadgets like the Impact Shot or Web Bomb, you’ll need to rely on his basic web shots all the more to quickly neutralize large groups.

In a pinch, even the Web Throw can do the trick on an already webbed enemy, and this can even work on Brutes and other tough enemies with the proper skills – saving you from an otherwise deadly battle.

Most times you encounter a stealth situation, they will largely be optional – but taking out enemies silently lets you reduce their numbers before the inevitable engagement.

There are two types of sneak attacks – square for close up and silent takedowns that enemies can’t detect unless they have line of sight, and triangle for zip takedowns that are louder, but still work if other enemies are far enough away.

Square takedowns are better when isolating one enemy from a friend nearby – but if you an spot several isolated enemies, you can quickly web strike between targets to instantly knock them out – just be sure to ping them with AR targeting to see if it says “Danger” or not to know if they will alert anyone else.

As for silent takedowns, they can be done in many ways – behind targets, under them on ledges, or above them on perches – though a perch can usually only hold one thug, so utilize web shots on the environment to lure enemies to perches that are free.

These tips include features and abilities that only Miles possesses, and are new to the series.