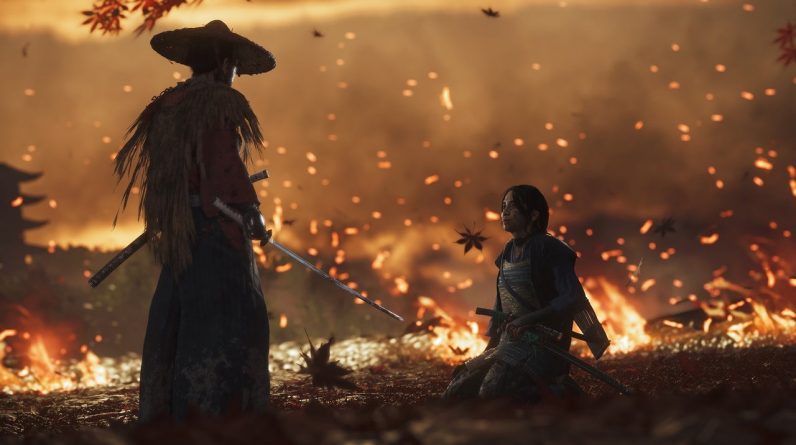 Ghost of Tsushima’s recent State of Play showcase offered a brief look at how combat will work in the upcoming open-world PS4 adventure from Sucker Punch, but some new details have revealed just how challenging the combat is meant to be.Speaking with IGN Nordic, Ghost of Tsushima Game Director Nate Fox explained how Jin, though a trained and skilled samurai, can be felled by a few hits — players won’t just be able to go swords blazing into an encampment and take out a dozen foes.“We are trying to make a grounded game in that sense, so a couple blows from the enemy will kill you,” Fox said. “The game is very challenging. We have three words to describe the combat: Mud, blood and steel. We absolutely honor the lethality of the sword. We watched samurai movies and people go down with one or two strikes, and that is embedded inside of the combat. Beating the Mongols in battle will be hard, but it’s that challenge that makes it feel alive and the victory rewarding. You can’t just run into a camp and fight 5 people at the same time, you will get overwhelmed and die.”

The State of Play showcase showed some expert play — when IGN spoke to Creative Director and Art Director Jason Connell about Ghost of Tsushima, he echoed that sentiment of players needing to employ all of Jin’s techniques, including those he acquires while donning the identity of the titular Ghost.

“There can be a lot of [enemies] around you and you’ll have to start using some of those Ghost tactics to start augmenting your play style because otherwise, seven or eight guys around you might be too much for a samurai to handle,” Connell told us.

For those looking for extra challenge, though, they can turn to what Fox described as duels against other expert fighters.

“One thing we didn’t show at State of Play which I wish we had, was that the game features duels against other expert swordsman. This is classic samurai stuff. Those fights are incredibly difficult and they’re driven from personality and get solved in the most cinematic way possible, which is also true to fantasy. You need to study your opponent and understand how they attack in order to win,” he explained.

We also have an answer to a lingering question from the State of Play showcase’s combat section — namely, what exactly the HUD meant for Tsushima’s gameplay.“So the red bar is health. The golden spheres are Jin’s resolve. He uses these to regain a little bit of health. Also, it’s his grit to perform his most devastating attacks. These attacks drain him a little bit, [so] you have to make a tactical decision if you’d rather heal or really bring the fight,” Fox told Gamespot.

While we haven’t had a chance to go hands-on with Ghost of Tsushima just yet, we did learn plenty of more about it following the State of Play, including the decision by Sucker Punch to move away from Infamous’ karma meter for Jin’s story, what Ghost of Tsushima being Sucker Punch’s biggest game means, and how the black-and-white film grain mode positively impacted development.

Ghost of Tsushima is currently set for a July 17 release date.

Jonathon Dornbush is IGN’s Senior News Editor, host of Podcast Beyond!, and PlayStation lead. Find him on Twitter @jmdornbush.