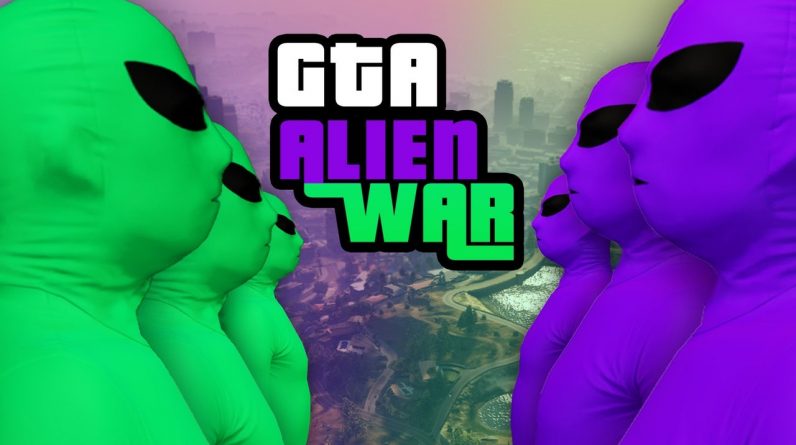 As pandemic lockdown has brought an unearthly quiet to our streets, a different kind of unearthly has infected the streets of Los Santos. Gangs of players dressed in neon alien costumes are embroiled in a battle, beating each other to death with baseball bats, night sticks, and hatchets. What was once a practical joke has evolved into a war, and the final climactic battle takes place this week, where the runways of Los Santos International Airport will become the battleground for GTA Online’s most bizarre community phenomenon.If you’ve logged on to Grand Theft Auto Online

within the past couple of weeks you’ll no doubt have witnessed groups of players causing chaos. The basic premise of the war is that those wearing green alien bodysuits are agents of anarchy, attacking players at random and restricted by just one ‘moral code’: no guns. Those wearing purple alien costumes are out to stop the greens, acting as a sort of vigilante army protecting other players. Over a matter of days those missions have blurred, and now it’s largely just a case of green versus purple in a strange echo of the turf war fought between GTA’s Families and Ballas.With the war dominating GTA Online, from the lobbies to the subreddit, a final battle has been declared by players. On May 15 at 8pm Eastern Time, the war will conclude in a colossal showdown at Los Santos International Airport, and afterwards things can go back to normal. At least, as normal as GTA Online can be in the wake of this community-shifting event.

That’s the end point of the alien gang wars story. But what of the start? Well, that’s all down to Adam Long. On April 15, Long published a video to Reddit. The clip shows him and a few friends – all dressed in neon green alien bodysuits – pull a handbrake turn on Los Santos’ pier and bail out of their van, startling another player. They then beat him to death with baseball bats and drive away. As of writing, the video has over 28,000 upvotes, and has inspired an all-encompassing movement.

On May 15 the war will conclude in a colossal showdown at Los Santos International Airport.

“The idea came originally when I saw a post on r/gtaonline about two weeks before I posted the alien video,” says Long. “The video was a chap just walking around the Vespucci canals when all of a sudden these two vans full of players just pull up and chase him down before beating him up.” Long intended to recreate the video with his friends, planning to do it dressed as “rednecks”. But one of his crew came out of the clothes store in a green alien bodysuit, and so the green alien gang was born.

“Our country is on lock-down, so we were constantly looking for new stuff to do on lots of different games,” Long says while explaining why he and his friends pulled the in-game prank.

Lockdown is one reason behind the wildfire-like spread of the alien gang wars – almost everyone I’ve spoken to about the phenomenon is of school age and now forced to stay at home – but social media has provided more fuel for the fire. “It’s even more fun just watching all the posts on Reddit, TikTok, and YouTube of the community just coming together and having so much fun during these crazy times,” says Long.

The Alien Gang War Needs You

All you need to get involved in the alien gang war is a bodysuit in the colour of the faction you wish to be part of. These can be bought from a Binco, Posonbys, ProLaps or Sub Urban store. You’ll find the Martian Bodysuit in the Arena War outfits section of a store’s menu, and they cost $358,000 for the green or $330,000 for the purple versions.

The rules of the gang war dictate that you must only use melee weapons. You can grab a baseball bat for free by playing the El Burro Heists mission, which features a lot of bat-wielding enemies. The mission can be launched from the Play Jobs menu, under the Rockstar Created section.

With all the tools required, you now just need to head out into the world and cause chaos. If you’re having trouble finding aliens to play with, joining a subreddit like r/intergalactics or r/GreenVSPurple can introduce you to plenty of players.

TikTok has been a surprisingly strong arm of the alien gang wars movement. The right GTA Online clip posted to the micro-video social network can lead to big boosts in follower counts, and generate viral memes. TikTok content creator Zhi Ko, known online as Nekoztek, quickly saw the potential in getting behind this new phenomenon. Despite having never made Grand Theft Auto videos before, he began to run updates on the alien gang wars. His follower count jumped.

“All of a sudden all my notifications are kids DMing me asking me ‘Hey, can you please play with me?’” he says, despite not being a previously established GTA personality.“When I started my TikTok it was going to be mainly about general facts and technology,” Ko, who works in the blockchain industry, explains. “It wasn’t going to be curated around gaming or specifically GTA. I’m trying not to post just GTA videos, but it’s very difficult when all these kids are asking all this stuff and I want to respond to them. I’m trying to produce at least a minimum of four or five TikToks a day, now my friend is telling me I need to start producing ten!”

With the community behind the war growing at an exponential rate, it needed a home. Intergalactics, created by Florent Gradit-Perier, is one of two major subreddits dedicated to the alien gang wars. When Gradit-Perier, known on Reddit as FloFlan, created the subreddit and its associated Discord server and in-game Crews, the green versus purple element of the war had yet to break out. The craze was simply anarchy on the streets of Los Santos.

“I set up Intergalactics Inc because I wanted to unite all the aliens to be more coordinated and make the war funnier,” Gradit-Perier says. “It wasn’t a purple vs green [war] but just aliens jumping on poor random players.”

“With everything going on in our world, the alien war has made quarantine more enjoyable.”

Even now, with the green and purple gangs firmly established in the community – as well as numerous break-out factions including the Men in Black and Republican Space Rangers – it’s hard to see any kind of true hierarchical organisation. But Gradit-Perier points to his subreddit for proof that people are working together in their own ways. “I saw some clips on our Subreddit with 15 aliens on a bus, or just chilling in the street,” he says. “We’re both unified and chaotic, but in a good way, a happy chaos!”

Alongside r/intergalactics is r/GreenVSPurple, set up by Reddit user tapwaterbread. While the subreddit also has aims of bringing alien players together, it has an interesting side goal: “it also allowed for the main subreddit to become less flooded with alien content,” says tapwaterbread.

Unsurprisingly, the alien war isn’t enjoyed by all GTA Online players. Their usual home has been transformed into a ganking arena, and it can feel impossible to escape. And that’s why, explains Ko, the final battle has been declared.

“This final battle came from Reddit,” he says. “They were talking about how the core game of GTA was being ruined, and this war had to be over. It was getting to a point where you can’t even get on GTA without seeing a hundred aliens going around killing you every five seconds.”While those who want GTA Online to return back to normal are no doubt cautiously waiting for the final battle to be over, for the warriors of the alien gang war the showdown is set to be the shining star of some of the game’s most enjoyable times. “It has made GTA 5 so much more fun for me and my friends,” says Lui, creator of the Official Purple Gang Discord server. “It’s really easy to make friends and play with them on here and find some greens.”

“I think the alien war has made GTA Online a lot more fun and has brought back a lot of veteran players to the game,” agrees tapwaterbread. “With everything going on in our world and us being stuck at home for most of the day, the alien war has definitely made my quarantine more enjoyable.”

Ko highlights how important the war and viral TikTok videos can be for lonely people stuck in lockdown. “Imagine being a kid who can’t even go see his friends because of this quarantine, and all of a sudden you have a thousand people who want to play games with you because of your clips.”

With the final battle fast approaching, this new community is already planning how it will adapt to life on the other side of the Los Santos International Airport showdown. “We host car meets every two days and gang meet-ups too sometimes to keep us all together,” says Lui. And the Official Purple Gang Discord isn’t the only group adopting non-alien activities to do with newfound allies; servers I’ve visited are already planning name changes to reflect their new identities in peacetime.Of course, some of the war’s supporters hope this fight won’t be the last of its kind. “I hope that Rockstar will make something similar to this in the future,” says Lui.

Ko also thinks Rockstar would be sensible to pay attention to the phenomenon. “I’m curious about how the game will evolve from here,” he says. “What future conflict will come from this? How will Rockstar adapt to this?” He notes that he’d like to see an official “Gangs” DLC expansion for GTA Online.

Rockstar is, of course, watching. On May 7 the developer made the alien bodysuits – which usually cost a huge $358,000 of in-game cash to buy – temporarily free of charge for all players. And since guns are prohibited by the war’s code, it means there’s now no in-game charge for anything required to take part. You just need to suit up, hijack a car, and you’re part of something huge.

At a time when the world is feeling more isolated than it ever has, being a part of something unifying is perhaps more important than ever. The fact that the players of GTA Online created this alien gang war themselves, with no input from Rockstar at all, only makes it all the more impressive and uplifting. In-game concerts may distract for an evening, but pledging allegiance to a gang? Well, that’s for life. Or at least until May 15.

Matt Purslow is IGN’s UK News and Entertainment Writer, and occasional from-the-Los-Santos-frontlines reporter. You can follow him on Twitter.