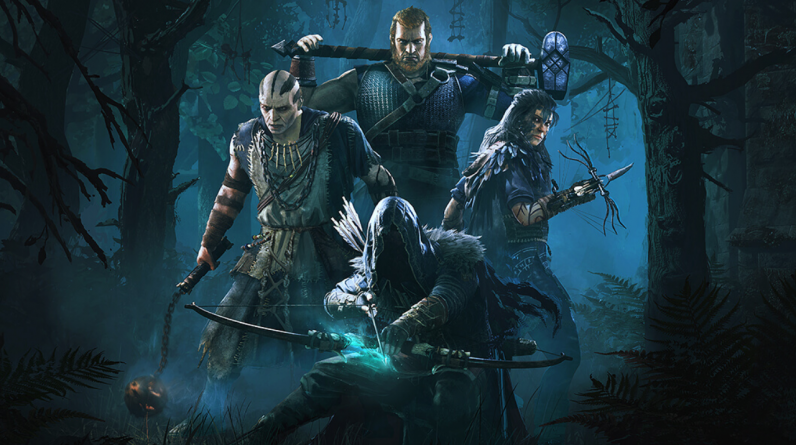 Shown as part of Sony’s State of Play and at The Game Awards last year, Sumo Digital’s Hood: Outlaws and Legends is a multiplayer heist game set in a dark reimagining of Robin Hood-era medieval England. But while the trailers are flashy, they give little more than a hint as to how Hood will play. Thankfully, Sumo decided it was more than happy to tell IGN everything – and its deeply detailed description makes Hood sound like an Ocean’s Eleven Merry Men simulator.Game director Andrew Willans explains to me that a match of Hood is made up of three stages; stealing the key to a vault, grabbing treasure from said vault, and escaping the map with your haul. It’s a fairly straightforward concept, but the barriers between your four-player team and the treasure are not just AI guards and a labyrinthine map. Rather than a co-operative game, Hood is competitive; a rival team of players are also present, hunting for the exact same prize that you are. It’s not just a heist, but a race, too. If you’ve played Hunt: Showdown, you may have a sense of the fun, and stress, that should entail.You’ll come face to face with your rivals at some point during a match’s three phases, which start with a pickpocketing exercise. “The first objective is all about stealing the key to open the treasure vault, but that’s not just lying around,” explains Willans. “It’s on the belt of the Sheriff of Nottingham. So you’ve got to sneak up behind and pickpocket the Sheriff, without him turning around and whomping you, or kicking the hornet’s nest.”You’ll need to work as a team to approach the Sheriff, overcoming a number of environmental obstacles on the way. “There are doors where you need to pick the locks silently, or smash them loudly, which could attract guards,” Willans reveals. “You’ll have a rope arrows that you can shoot down from the battlements, which will give you a silent entry point. As you spawn, usually what happens is you’ll be tagging the routes that you think are most advantageous for the team.”
Preorder Hood: Outlaws & Legends

With the key secured, it’s onto the next objective: finding the treasure vault. “When you get the key, we give you a clue,” Willans says. “We’ll say you’ve got the key to the church [or one of a number of other potential buildings], but it doesn’t tell you specifically where the vault is. So then it becomes a challenge to get into that building and get eyes on the treasure vault.”

At this point, the enemy team will be alerted to the fact that you have the key, but they won’t be provided with the clue. From their perspective, hopefully you’ll make enough of a ruckus that they’ll be able to hear the commotion and work out which part of the map you’re heading for. As such, stealth is paramount. This is reinforced by a number of systems that will hinder your teams progress if you’re caught by the city guard.“We’ve got different regions within a map,” says Willans. “If you trigger the alarms, then the AI calls for reinforcements, and they will lock down these regions. They can drop portcullis gates which will trap you in an area, and you’ll have to either deal with the threat or find a way to escape through tunnels.”

Hood is a hero-based game, so your team composition will dictate how you get yourself out of such a pickle. If your team is made up of the more fragile Mystic and Hunter classes, then you’ll want to scarper into the darkness. But the Brawler, based on Robin Hood’s Little John, has a trick up his sleeve: “If you’ve got a John on your team, he can lift the portcullis gate to get you out,” Willans reveals.

Additionally, there are minor punishments inflicted on the player who gives the team away. “If you’re the person that trips the alarm, your super ability will be blocked,” says Willans. “So you need to then return to stealth before you can use your ability again. It’s a subtle layer of saying ‘stealth is important’… Conversely, the more stealth takedowns you do, the quicker you feed that ability.”

Sumo doesn’t expect nor want players to fully stealth a match, though. “We quickly discovered that it’s actually really good fun when you meet the other team,” Willans says. “That friction is what creates the drama, the tension, and the fun.” As such, maps are designed to funnel teams into potential engagements, such as capture zones that, when secured by a team, are used as respawn points.

Conflict doesn’t necessarily have to be direct, either; Willans paints a picture of a team observing their rivals from a stealthy vantage point, and then making noise with tools like arrows and rocks to tempt the AI guards into attacking them. “We have our version of a medieval hand grenade,” he adds. “If you drop one of those, obviously people are going to come to investigate. So that’s a tool which is good if you want to mess with the other team.”

Upon reaching the building that contains the treasure, you’ll have to find the vault itself. The largest potential location has five floors, and so the task can require a lot of scouring, but the AI is there to help. “We have different guards on different doors,” Willans says. “So you can expect heavier resistance on the treasure vault door, as opposed to like say, the dining room or the kitchens in a castle.”

With the treasure in hand, your team now needs to get it to one of a number of extraction points. It’s in this phase that Sumo tries to really ratchet up the action. “What is it all of these heist movies tell us?” he asks. “The tense moment is when they crack the safe. They get the money, and then usually that third act is the explosive finale. That’s the bit that we were missing when going completely silent, that frantic action as you spill onto the streets like Robert De Niro in Heat. So yeah, we just fully embraced this.”

This explosive final phase comes courtesy of the AI’s escalation system. “If the AI gets one look at the treasure chest and sounds the alarm, the entire map goes into lockdown,” Willans reveals. “All hell breaks loose. They’ll send knights to the extraction point. The sheriff knows that his loot has been stolen, and he starts marching towards it. So then at the extraction zone you’ve got the knights to deal with, you’ve got additional guards, and you’ve got the sheriff, who is a one hit kill machine. He’ll just grab you and crush your skull.”Such a commotion is a perfect opportunity for a struggling rival team to flip the tables in the final moments. While the successful thieves fight off the guards, you could swoop in, grab the treasure they worked so hard for, and extract it yourself. It’s one of a multitude of valid tactics that Sumo hopes players will learn and adapt to.

“You might try and intercept the enemy team, kill the person carrying the key and take it from them,” Willans suggests. “You might decide ‘We’re going to get ahead of the team and find the vault before they do’. Because it’s a level playing field, no one knows what the vault is going to be. Then you can set up an ambush at the vaults, and basically hijack them.”

This multitude of possibilities, combined with the unpredictability of an opposing team, means that each match of Hood has the potential to play out very differently. But Sumo realises that things could get stale, so there’s plenty of variables built into the game. This starts, naturally, with a variety of maps of altering sizes. Within those maps, the vault location is randomly decided, and certain maps have more vault options than others. And finally, there is a library of AI patrol paths to ensure that guard behaviour differs from match to match. “It’s like rolling the dice,” says Willans. “You might play the same map 20 times but you’ll never have the same set of ingredients in the same order.”

Players of Hunt: Showdown may find many of these ideas very familiar. That’s no coincidence; Sumo has enjoyed and been inspired by Crytek’s take on PvPvE. An older version of Hood even had a mechanic of digging up clues, much like players do in Hunt. But over time the design has evolved beyond a medieval version of the same game into something quite different, just still in the same genre. And, like all the best heists do in the movies, the plan for it sounds perfect. The proof will be in the execution, though, which hopefully will be closer to The Thomas Crown Affair’s flawless theft than Reservoir Dogs’ botched diamond heist.