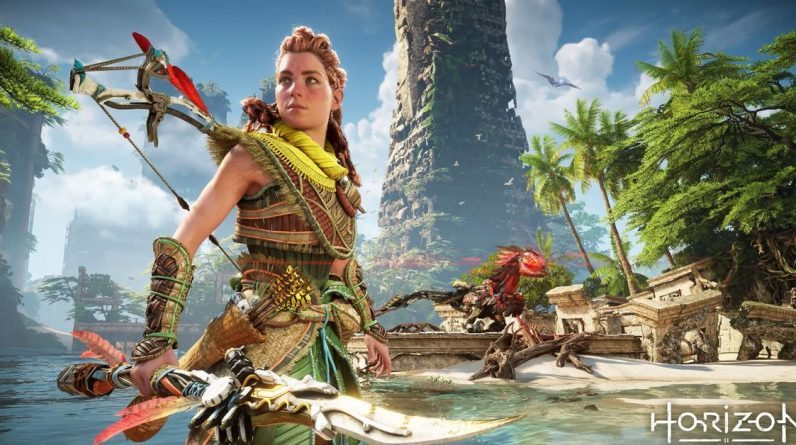 Horizon Forbidden West was the focus of the latest episode of Sony’s State of Play series, which showcased a bunch of new gameplay details about Aloy’s next journey in a lengthy clip of game footage.

In the 14-minute gameplay reveal, developer Guerrilla Games showed Aloy encountering a group of raiders from the Tenakth tribe who had captured her friend Erend. These enemies can override and ride the game’s mechanized beasts, known simply as Machines. Aloy herself rode a Machine in a battle against a gigantic new monster, a mammothlike creature known as the Tremortusk.

Aloy has many weapons and traversal tools at her disposal in Forbidden West, including a projectile-based grappling hook called the Pullcaster and an electronic glider known as the Shieldwing. She can also swim underwater indefinitely thanks to her Diving Mask, which also helps propel her forward through fast-moving Pacific Ocean currents. Finally, upgrades to her Focus allow her to override new kinds of Machines such as Clawstriders — one of many rideable robots in Horizon Forbidden West — and highlight ledges and other areas in the environment that she can grasp while climbing.

Horizon Forbidden West is in development at Amsterdam-based Guerrilla Games. In the open-world action game, Aloy will have to save the Earth from a dual threat: a “collapsing biosphere” caused by a “red blight” that is “choking wildlife and starving animals and tribes,” and extreme weather events that take the form of “massive supercell storms,” game director Mathijs de Jonge said upon the game’s unveiling last June during Sony’s PS5 reveal event. Sony later announced that Horizon Forbidden West will also be released on PlayStation 4.

Surprisingly, Sony did not reiterate its previously stated release window of 2021 on Thursday. Instead, Horizon Forbidden West narrative director Ben McCaw said in a PlayStation Blog post that “we don’t have an exact release date yet, but development is on track and we’ll have an update for you very soon.”

The original Horizon Zero Dawn debuted in February 2017 on PS4 and ended up being one of the console’s bestselling games. It tells the story of Aloy, a young woman on the verge of adulthood who strikes out from her village to track the people who attacked her tribe and tried to kill her. The game takes place in the 31st century, in a world where humanity is living a primitive existence on Earth — with life having been reseeded after it was wiped out entirely during the 21st century by a plague of killer robots.