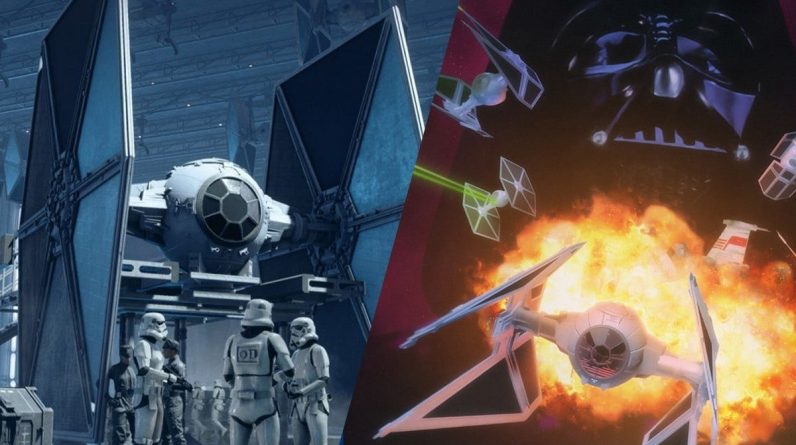 Star Wars: TIE Fighter, the incredible 1994 dogfighting space sim, opens with a mission in which you’re given the task of inspecting incoming bulk freighters after The Battle of Hoth, while also keeping your eyes peeled for anything unusual. Despite how mundane a task that sounds, it does a great job of teaching you TIE Fighter’s complex control system while perfectly communicating the unnecessary bureaucracy of Empire life as a newbie pilot before, of course, the Rebels engage your TIE and a fight begins.What I wasn’t expecting however, is that more than 20 years in the future, Star Wars: Squadrons would contain a very similar version of that very same mission, connecting these two games from very different times in a surprisingly intimate way. In fact, Star Wars: Squadrons is, for me, a spiritual successor not just to TIE Fighter but to an entire lineage of classic Star Wars flight games.

The connections started even before that mission, however, before I’d even entered my own ship. Upon starting Star Wars: Squadrons I was greeted with the option of customizing both my Imperial and Rebel pilots names. And then I saw it. Ace Azzameen? Azzameen. Now there’s a name I’ve not heard in a long, long time.

It’s not a randomly selected name for a Rebel pilot but a knowing nod to the protagonist of 1999’s Star Wars: X-Wing Alliance, and it immediately put me at ease. Knowing that a developer shared a love as deep as I do for the forefathers of Star Wars flight games was a comforting feeling, (although sadly this doesn’t mean Ace is now canon.)After a couple of minutes spent customizing the characters I was about to play, my newly created Imperial Navy pilot loaded into the Star Destroyer Overseer for the first time and, in VR, it was a beautiful sight to behold. Gone were the 2D point-and-click slideshows of TIE Fighter. With virtual reality, the very guts of this flagship are there to soak in, and aren’t just a copy of what I’ve seen before but a true successor.

The Overseer is an imtidiating environment. Cold, sharp and devoid of any personality, unlike what you might expect to find within a Rebel Mon Calamari Cruiser. With Stormtroopers patrolling about, Imperial Shuttles coming and going and Navy Officers chatting away, it’s a weird feeling. It’s hard to explain the tremendously awesome scale of an Imperial Hanger, along with all the trimmings included, until you’re left standing in one.

But this isn’t Star Wars: Loiter Squadron, I had a TIE to fly and I was eager to get going. But as I began my pre-flight checks, I was immediately taken back to those stressful days within the claustrophobic 2D cockpit of old. As a six-year-old, having to micro-manage between my laser cannon recharge and engine power, all whilst keeping an eye on my rear sensor in case an X-Wing decides to cut my career short, was a lot to handle!

As I began my pre-flight checks, I was immediately taken back to those stressful days within the claustrophobic 2D cockpit of old.

Pushing aside immediate threats like that, what I hadn’t seen in-game due to the visuals (or lack of), my imagination sure did a great job of filling in the blanks. For every low-poly craft I went up against in TIE Fighter, in my head at least, I knew there was some story behind that pilot. There always is in Star Wars, the Expanded Universe has made sure of that.

Back in Squadrons however, it was a whole other experience. Every cockpit is filled with excruciating detail, and now that Squadrons is a part of the Star Wars canon, so are the cockpits as well. Sure, we’ve seen glimpses of what the innards of a TIE Fighter or X-Wing looks like in the films, but Squadrons has now set the absolute standard for how they should look going forward.

And with my pre-flight checks now complete, I locked onto my Squadron leader and began my journey into a galaxy far, far away. Once in space, I started a self-guided tour around my TIE’s cockpit. What stuck out to me, almost immediately, is how spacious a TIE Fighter actually is. That sense of scale wasn’t apparent back in those older games but, to be fair, why would anyone tell you about the ridiculous amount of space you’ve got in the back anyway? Despite how brutally sharp and clean a TIE Fighter may be, it certainly feels luxurious to fly – the pride of the Empire. In VR, being able to get up close and personal to every cockpit instrument is a treat, not to mention being able to spin around and take a peek outside the rear view window, or look directly above through the four slits where your escape hatch is. All of these details are something you just couldn’t experience on the same level back in the original TIE Fighter.

As I came to understand the controls while flying in formation along my squad mates, I realised the implications VR will have in terms of how Star Wars: Squadrons will actually be played. Gone are the days of constantly switching back and forth between potential threats with my combat multiview display. Now, all I have to do is simply look around for myself. Such a change almost feels like cheating at times, like a tactical advantage I feel dirty for using, but this is war and I’ve got a Rebellion to crush.

Which brings me back to those rather boring bulk freighters I mentioned earlier. To clarify, these fairly vanilla looking ships aren’t anything special, in fact, they’re quite boring to look at, but to any hardcore fans of the X-Wing or TIE Fighter games, they’re instantly recognizible. A mark from the developers, acting as comfort for those familiar with a genre of Star Wars games long thought to be dead.

And by the time it took to scan my first freighter, just like I did all those years ago in TIE Fighter, I felt like I was back home. After putting 15 hours into Star Wars: Squadrons exclusively in VR, it’s clear that adding virtual reality support not only takes the Star Wars experience further but it connects these games to a realm previous titles could never have reached.

With the added benefit of full HOTAS support as well, thanks to my trusty Thrustmaster T.16000M, this galaxy has never felt more believable. Unlike a mouse and keyboard or controller setup, having the added privilege of using a HOTAS whilst flying just added to my enthusiasm for doing so. As I darted across space, going from freighter to freighter, I was slamming the throttle to max power, all while yanking the flight stick sideways just to see if I could handle it without getting motion sick. A lot has changed in 20 years but despite the weird insert of self-punishment, I wanted to see how far this TIE Fighter and myself could go.

Star Wars: Squadrons connects to classic Star Wars flight games in many, many ways. It recaptures so much of what I fell in love with as a child – but in VR it becomes something more than I could have imagined when I was playing TIE Fighter and the like. As I approach those bulk freighters again, just like I did all those years ago, VR turns this into so much more than an imitation of a lost series of games. It’s a true next step – the first, I hope, of many.

For even more Star Wars: Squadrons, why not check out our campaign review, multiplayer review or some VR gameplay? The choice is yours, it’s a big galaxy out there!