Home Gaming News How to Get the Reward for Reported Crimes, Bounties – Cyberpunk 2077 Wiki Guide 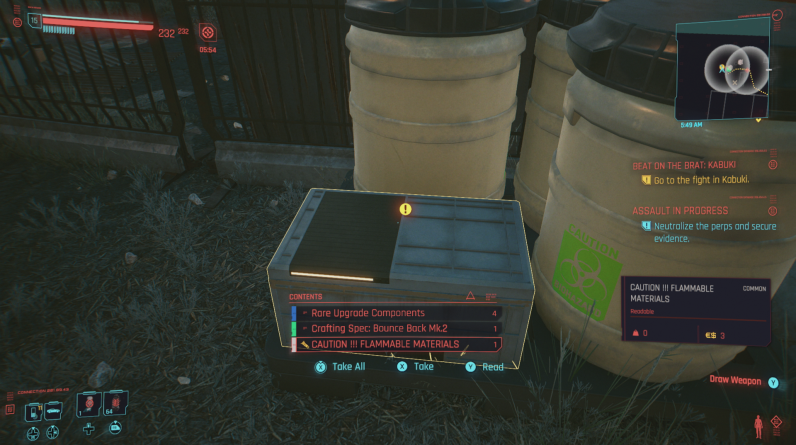 In Cyberpunk 2077 you’ll come across plenty of instances where you can intervene in a crime in action. You might even have the chance to save civilians and make money while you do it! This Cyberpunk Crime and Bounty guide explains all you need to know about those tasks and how to collect bounties.

How to Collect a Bounty

One of the earlier things you’ll learn in Cyberpunk is that with V’s improved scanner, you can see who in Night City has a bounty on them. All you need to do to “collect” that bounty is simply subdue the enemy. That’s it. There’s no drop off, no number to call. Once the job is done the money is yours.

However, if you subdue your chosen target and don’t see a money pop-up on the left side of the screen it might be because you’re still in combat.

When you’re in combat Cyberpunk won’t show any new XP or money gained during a fight. Instead, it’ll show all those pop-ups after you’ve gotten out of combat. You can tell if you’re in combat if your mini-map has a red border and says “combat” along the bottom of the mini-map.

However, is it worth collecting a random bounty? Usually not. Individuals aren’t usually worth a whole lot and you’ll have to subdue more than one target more often than not. The money an individual is worth and the Street Cred you can get from subduing them (you can see the street cred you’ll get in green text next to the “SC” label in the scanner) varies based on the enemy. If you’re taking out a crime boss, for example, they’ll be worth a lot.

If you’re taking on an Assault in Progress or other NCPD reported crime task, you’ll end up taking out several enemies with bounties on their head. However, that’s not always the only thing you need to do for a reported crime. Many of them require you to also pick up evidence to “finish” the job. You’ll know that you haven’t picked it up if you’re still in the area and have the task on the right side of your screen.

The “evidence” for reported crimes are often data shards on a laptop or sometimes in a purse or even on a person. You can use your scanner to find them. They’ll usually be near where the bulk of the enemies were when you first approached the scene and are marked by the yellow exclamation point.

When you’ve successfully collected the evidence you’ll see a “Job Complete” notification on the left side of the screen along with your payout.

Some reported crimes have multiple steps too! After you collect the evidence you should get a payout, but if you instead see a job update popup on the left, check your Journal in the menu. Scroll down past Gigs and you might have something under an NCPD section that will give you a trackable objective for NCPD reported crimes.

Don’t forget to loot all the items in an area after a reported crime is cleaned up! It’s in these events you’re more likely to find a junk item worth over $750.

It’s worth collecting guns and selling them or disassembling them anyway.