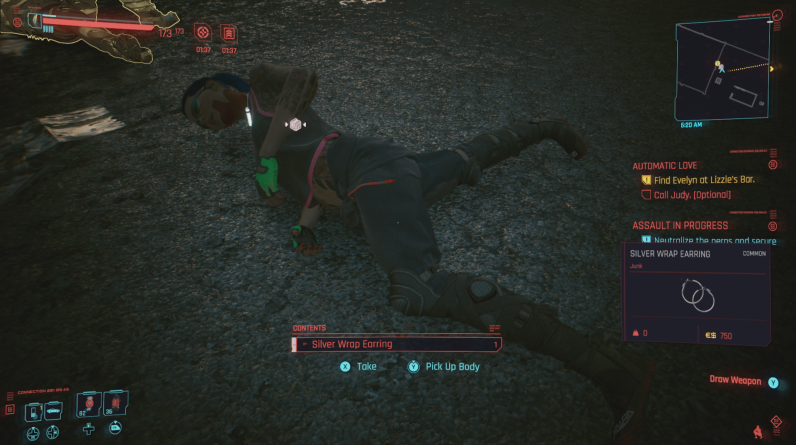 In Cyberpunk 2077 you’ll need money for the many shops, buying cars, and completing jobs, and entering tournaments. If you need some extra cash for your adventure early on, try these tips.

Fun fact: Money in Night City is called Eurodollars. It’s referred to as ennies as well.

Early on pick up everything. There’s a chance some of the junk you find is worth over $750! Every ennie counts early on. The junk you find around Night City isn’t “owned” by anyone either, so no one cares if you take it from a public place.

Most junk and consumables don’t weigh anything either, so there’s no penalty for stuffing your pockets with these useful things.

You can sell junk in bulk at any shop with the press of a button (check the bottom right corner of your screen when you’re in a shop menu) and you can sell other items too. If you’re not going to get into crafting, consider selling extra weapons instead of disassembling them.

Remember, Night City is littered with Drop Stations, the yellow stations (of varying size) marked on your map by a box. You can quickly sell your junk there.

Some of these are faster to complete than others, especially if you’re running in and gunning. Assault in Progress should never take more than a few minutes. Gang Activity spots will take longer due to the sheer number of enemies present and are often more dangerous.

Stealing from the System

Use quickhacking often and get at least level 5 Intelligence. Then, unlock Advanced Datamine perk in Breach Protocol to increase the amount of money you make from Access Points (these things are everywhere and are easily found in enemy territory as control panels, laptops, antenna, and more) by 50%. There’s another level of this to upgrade the money you make by 100%.

If you hack and unlock at least one or two with the first level of Advanced Datamine, you should make $600+ each time. The reward is random, though, but most times we’ve hacked we’ve received money as a reward along with components.