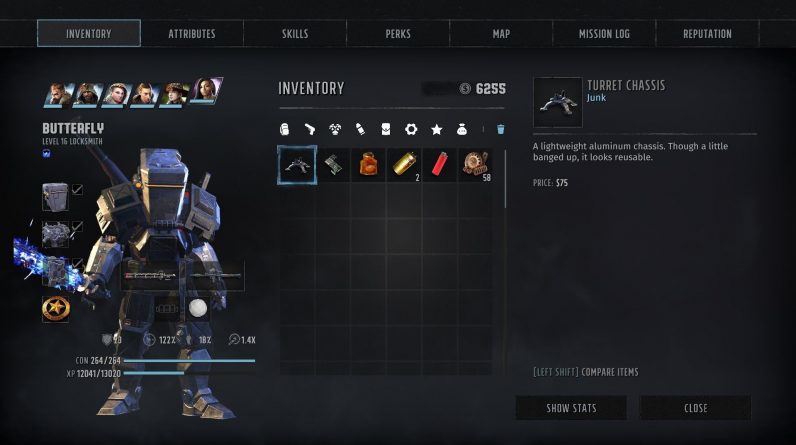 Below are several different methods you can use to earn some fast cash in Wasteland 3.

The main source of most of your money in Wasteland 3 is going to be from junk. Every time you’re out and about exploring, keep an eye out for junk piles, dumpsters, and anything else you can loot. You’re likely to come across containers filled with junk that is only good for selling. While you might not have a use for it, merchants are happy to buy it. Who knows why?

A useful tip for finding lootable containers mentioned in our Tips and Tricks guide, is holding left shift on PC to highlight containers. This will show anything and anyone that can be interacted with.

Looting random containers and junk piles isn’t the only way to find valuable junk, however. You can simply loot it off enemies that you’ve killed. They’re often carrying all sorts of random items like Bic Lighters and Melted Capacitors.

Note that you can get a lot of Scrap by field stripping weapons – which is only good for selling. Depending on your barter skill, it will either be better to strip down weapons before selling the pieces (with a low barter skill), or hanging onto the weapons to sell intact (with a higher barter skill).

Taking full advantage of selling junk for money requires investing in the Barter skill. For every skill point you invest on one character into Barter, you’ll get an extra 50% from selling items. This will max out at an extra 500% sell value on items at level 10. Also, you can get the Antiques Appraiser perk at level 7, that gives you a 5% chance when selling junk for it be sold at 50x its value.

This little trick requires a high Barter Skill, but it can net you a lot of cash fast – at the expense of getting banned from the tables at Little Vegas.

When speaking to the Blackjack Dealer in Little Vegas, you’ll have the option to cheat by counting cards and investing over several bets. This will cost you $100, but payout with $360 – and you can do it multiple times with progressively harder skill checks using Barter 4, Barter 5, and finally Barter 6.

Make sure that you already have a Barter skill of 6 before your second attempt at cheating – if you leave after the second time you’ll be cut off, so you may as well go for broke in the same conversation if possible.

A valuable source of money will always be completing missions for rewards. Depending on your social skills, you may even be able to swindle higher rewards from certain missions as well. While money rewards are common, even if you get gear rewards like armor instead, you can sell whatever you don’t need. Perhaps that’s an old set of armor you’re replacing with better armor as well.

Wasteland 3 has a certain point in the story where you likely need to grind a bunch of levels to continue the primary missions. Why not spend this time completing Secondary Missions so you get both experience and rewards?

For more useful How To Guides, head over here to learn all sorts of neat Wasteland 3 information.