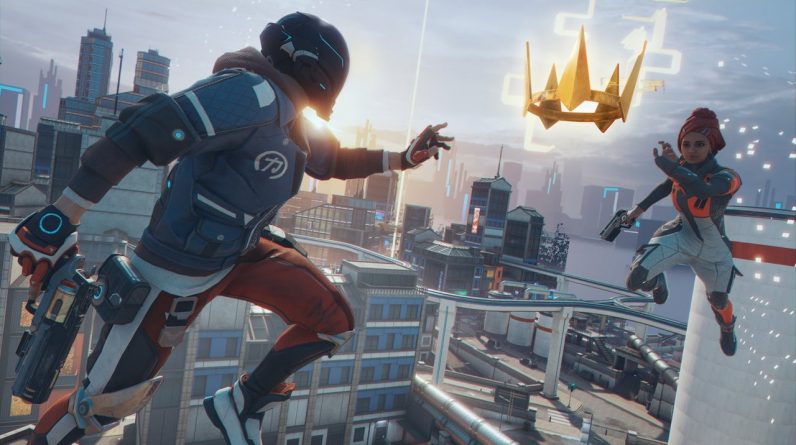 There’s not an open grassy plain, thicket, or forest to be found in Hyper Scape, Ubisoft Montreal’s upcoming battle royale first-person shooter. Rural areas are a traditional component of the genre, with natural biomes offering a change of engagement distances and cover opportunities, but Hyper Scape rejects tradition and takes place on an exclusively urban map. Made up of housing blocks, factories, monuments, and courtyards, in this city playground, as long as it’s man-made, it’s fair game.While the changes a fully urban map brings are many, there’s one that serves as a fundamental change to the way you have to think about this version of battle royale: verticality. Hyper Scape is set in Neo Arcadia, a city that’s essentially a high-tech reimagining of Paris, complete with zinc-roofed townhouses and even the actual Notre Dame cathedral. And if you’ve been to Paris, or seen it in a film, then you’ll know the city has a lot of height. Hyper Scape is all about using that height.There’s not a parkour system as such, but rooftops are clearly designed with pathways, and networks of buildings are bridged by elements such as rail tracks that tower above the streets. Many of the buildings can be entered and scaled via staircases – imagine if Call of Duty: Warzone’s Downtown was the blueprint for an entire map – but classic 1990s FPS-style launch pads are dotted all over the city to fire players over the skyline. On the way back down, buildings are covered in balconies, ridges, and windowsills to allow you to land at the right height to continue your battle.

Adapting to this new way of navigating a battle royale space happened pretty quickly during my hands-on with Hyper Scape. Like with Assassin’s Creed, there’s good use of visual design to direct your attention to spaces that can be used or entered. All ‘windows’ and ‘doors’ are actually opaque sheets of bright orange glass, which call your attention to a new area to duck or dive into. They also indicate where people have been; no orange means danger inside at worst, or all the good loot has gone at best.

Ah yes, the loot. It’s the staple of the battle royale genre, and yet it’s boiled down to just the bare essentials in Hyper Scape. There is no inventory, no weapon mods, and no armour system. You simply have two weapon slots alongside two ability slots for ‘hacks’. You see, Neo Arcadia isn’t a real city; it’s a VR metropolis located on the internet, used as an escape from a dystopian IRL. Yup, the fiction is straight out of Ready Player One, and that allows for a little bending of the rules when it comes to special abilities.

Hyper Scape has an energy cannon that feels pulled from Unreal Tournament.

While I say that, the current build doesn’t bend the rules as far as I’d like. Most of the hacks, which are picked up from the ground just like weapons, are established ideas from other battle royales given an in-universe make-over. Wall, for instance, throws up a brick barrier to break sightlines, akin to Fortnite’s building. Heal and Armour do what they say on the tin, made special only by the absence of health and shield pick-ups on the map. These are not tools that make me feel like I’m breaking the Matrix.

One of the hacks does offer some promise that Hyper Scape may have more interesting ideas to come, though. It’s called Ball and it… well… transforms you into a ball. A giant, bouncing sphere that can leap over buildings like a chrome version of the Rover from cult sci-fi TV show The Prisoner. It makes escaping – be that from overwhelming engagements or from the edge of the shrinking playzone – quick and entertaining, and I hope as Hyper Scape grows and evolves it embraces more of that madness.

And that goes for weapons, too; while sporting a collection of assault rifles and shotguns, Hyper Scape also has an energy cannon that feels pulled from Unreal Tournament, a rotary mini-gun last seen on the set of Predator, and a plasma blast rifle from Halo’s cutting room floor. I hope that, as the game evolves, more of these kinds of weapons appear. There’s already a taste of Unreal to the combat with its jumping and launch pads, but I think introducing a flak cannon with bouncing projectiles would really add a special spice.

Furthering the quest for simplicity, instead of a series of modification upgrades like scopes and silencers, Hyper Scape simply upgrades your weapons and hacks if you find another copy of it in the world. For example, if you’re using the Ripper assault rifle, each subsequent pick-up of another Ripper increases its magazine size. For the Protocol V sniper rifle, each new ‘fusion’ gradually builds the damage to a one-shot-kill.

This creates an interesting progression arc that rewards long-term attachment to weapons, as ditching a gun or hack for something new means resetting your progression. It’s in direct opposition to Warzone’s rarity tiers, which continually offers cooler, better equipped guns, or Apex Legend’s modifications that freely transfer between guns of the same category.

As such, any change in tactic requires sacrificing a benefit; if you’re forced from the rooftops to the street by the playzone and need to exchange your sniper rifle for a shotgun, you have to throw away progression. The speed of Hyper Scape feels designed to encourage quickly pivoting tactics as circumstances change, and so during the hands-on I found myself often using base-tier weapons, which felt frustrating. Hopefully the ever-changing nature of battle royales means Hyper Scape finds an answer to this problem.

Dead players can act as scouts, running ahead and pinging incoming enemies.

Another decision that I’m interested to see play out is Hyper Scape’s approach to death. When you succumb, instead of being forced to spectate you actually remain on the map as a ghost. You can run around freely with the remaining members of your three-player squad, although you can’t interact with the world. To resurrect, you need to find a restore point, which is generated on the spot where players die. Handily, you’re not limited to using points generated by kills your squad has achieved, so if you find an area where a battle has broken out there’s usually plenty of restore points to choose from. Simply step on, get an alive team mate to activate it, and you’re dropped back into the fight once more, albeit with nothing more than your melee baton starting weapon.

The system means more than there being no true downtime, though; dead players can act as scouts. As a ghost, you can run ahead and ping incoming enemies, allowing team mates to successfully ambush. Yes, they’ll be a player down, but intelligence is a vital tool. Only time will tell if a squadmate being able to warn of advance danger is as OP as it sounds.

As with other battle royale games, you win Hyper Scape by surviving to the final safe zone of the map. But rather than a shrinking circle, the map actually disintegrates in sections. There are nine districts, and each will randomly begin to ‘decay’. Buildings begin to lose triangle-shaped patches of their textures, and gradually the entire area turns black. Then the map begins to collapse; buildings are erased from beneath your feet as you sprint for safer zones. It’s a much more interesting idea than a shrinking circle, and the decay effects make it clear just how long you can stay in the sector.