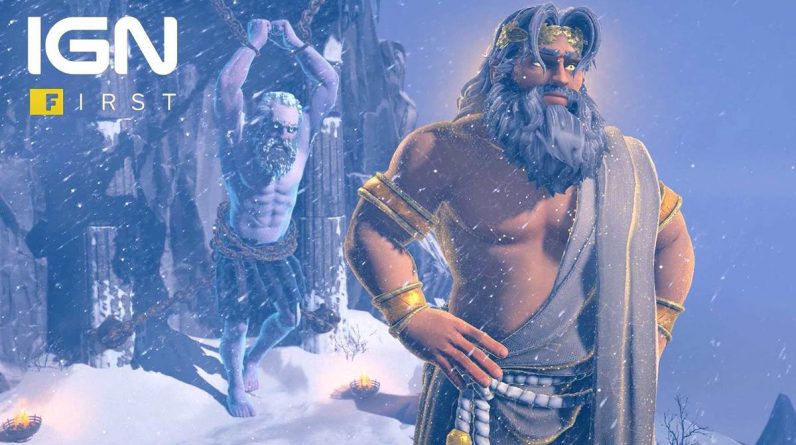 Immortals Fenyx Rising chronicles the journey of Fenyx, a young Greek shieldbearer attempting to solve the mysteries of the gods. Constantly watching them – and, by extension, you – are Zeus and Prometheus, the game’s bickering narrators who commentate your actions like godly shoutcasters. Think Bastion’s dynamic narrator acting as a two-man comedy troupe dedicated to mythology jokes, and you’re on the right path.If you’re not familiar with Zeus and Prometheus, the former is the king of the Greek gods, while the latter is the child of a Titan who stole the fire of the gods in an attempt to help humanity. Zeus now has Prometheus chained to a mountain, and it is from that lofty podium that the two watch the action of Immortals unfold, dynamically narrating your actions in real-time.“Prometheus is the nerd who believes in humanity and is very romantic and passionate, and loves telling stories, to the point of sometimes becoming pretty long-winded,” explains narrative director Jeffrey Yohalem. “Zeus is the king of the gods who has been sitting on top of his throne for a while and is used to getting everything that he wants, and loves to party. He’s the aging frat boy. And so that’s the odd couple that you have.”

The two are not just casually observing your adventure. “Prometheus and Zeus have a bet at the very beginning, that if Fenyx turns out to be a hero that’s capable of rescuing the gods from this villain, Typhon, who has turned everyone to stone, then Prometheus will be set free,” Yohalem says. “And if Zeus wins, then, Prometheus has to shut up about that forever. So, the whole narrative hinges on that bet. And that’s why Prometheus is telling this story to Zeus.”

This may sound like serious stakes, but the duo are far from dour. Their dialogue, triggered by your own actions and story milestones, is loaded with jokes, from observational comedy to nudge-nudge-wink-wink punchlines. It’s a tone that Yohalem says is inspired directly by the Greek myths themselves.

“If you’re a mythology nerd you’re going to laugh with all these secret jokes.”

“The myths were not always sacred in the sense of today, the way that we treat the story of Jesus, or the Bible,” he says. “The Greek myths were much more like reality television for the people who were alive at that time. They were heroes, but not really. For instance, there are no temples built to Ares pretty much, because no one liked Ares. You could make fun of gods, or dislike gods, or feel like they did something wrong.”

When putting together Zeus and Prometheus’ dynamic dialogue, Yohalem has been very clear on tone. “The humor is not zany in the sense that people do things that are completely inexplicable,” he explains. Immortals frequently references the modern day, but that makes sense for its characters. “Prometheus is a prophet who can see the future,” he says. “So all the jokes have a context that you can figure out, they don’t just come out of nowhere.”

The difference between these two methods, explains Yohalem, is the dialogue it creates. “You end up with interactive narrators,” he says. “So everything that the player does is suddenly commented on by the narrators. And it’s a conversation in the truest sense.”

This system feeds not just back into the game’s comedy aspirations, but also its narrative. “It provides this opportunity to joke about the essence of storytelling itself,” Yohalem explains. “They set the stage at the beginning of the game. And then they appear at various moments, so it’s like having constant companions with you on your adventure, that hopefully make you laugh.”

Importantly, Zeus and Prometheus’ aren’t just there to crack jokes about your progress through the world; their relationship will grow across an arc that spans the whole game, no matter what order you tackle its freeform world in. “I found a way to make sure that the narrative progresses while also allowing you to do whatever you want at any moment,” Yohalem says. “And so they’re not static characters. The story of Zeus and Prometheus and their relationship to each other evolve over the course of the game. They don’t just stay as these commentators, because otherwise it wouldn’t be a story, it would just be commentary.”

To create this system – one where Zeus and Prometheus actually have a story of their own, but are also able to comment on what the player is doing – required books-worth of recorded voice over. “The manner of content is actually mind boggling,” Yohalem says. “I don’t even know how to describe to you the amount of hours of VO there is in this game from Zeus and Prometheus. And the amount of jokes, there’s a huge number of jokes, they’re scattered everywhere.”

Naturally, it means in a single playthrough you’re unlikely to hear everything the two have to say. “It depends how much a player explores,” says Yohalem. “If the player doesn’t explore and just goes on the main path through the game, probably something like 50%, maybe even less.”

The characters of Zeus and Prometheus grew out of a previous system that had been built for Immortals back when it was known as Gods and Monsters. Originally, famed Greek author Homer was set to narrate the game.“Homer was telling a story that had already been set in stone that was long dead,” Yohalem recalls. “And so, that means that Homer has no stakes in that narrative and isn’t a part of that narrative, so exists completely independently. So that felt too safe to me. Having Zeus and Prometheus be the narrators of the story meant that the time period was the same. And so the outcome of that story really mattered for each of them and it’s happening simultaneously. That allowed for a much more complex narrative.”

Ubisoft Quebec has been open about Zeus and Prometheus’ journey, but more secretive about the trials Fenyx him or herself face on their journey through the land of the gods. We’ll find out how their destiny ties into the mythology when Immortals Fenyx Rising releases on December 3. For more, check out our developer tour of the Golden Isle, as well as our deep-dive into the puzzles found in the Vaults of Tartaros.