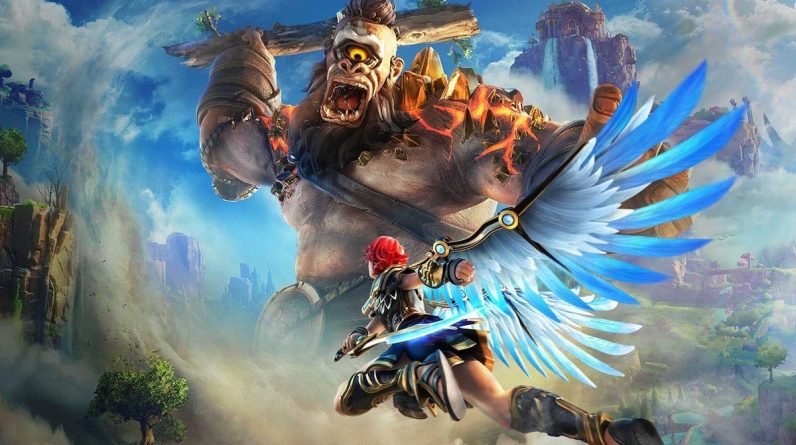 In Greek mythology, Icarus’s ambition led to his literal downfall when he flew too close to the sun and melted his wax wings. So yes, being overly ambitious does have its drawbacks, but so too does a lack of it. Immortals Fenyx Rising, for instance, offers a light and entertaining spin on Greek mythology that’s clearly inspired by a reverence for The Legend of Zelda: Breath of the Wild. Its setting, systems, and story are packed with references to iconic deities and legendary tales, but always with tongue planted firmly enough in cheek that it avoids coming off as self-important. All this flavour makes for a great set-up that’s complemented by fun combat, but the puzzle design across this colourful open world is disappointingly workmanlike. In a game about heavenly gods and fantastical monsters, the puzzles are far too grounded by earthly concerns.

Immortals’ most inventive touch is its storytelling. The journey of Fenyx, a mortal soldier shipwrecked on a mystical island, is presented as a tale told by an imprisoned Prometheus to Zeus, and the dynamic between the two is hilarious. The pair’s bantering narration interjects regularly throughout your roughly 30-hour adventure, helping to further the plot, provide mythological context, or simply crack jokes. And further on, Immortals does an effective job of balancing the focus on humour with story-driven character development.

The overarching story revolves around the hulking monstrosity Typhon, once imprisoned by Zeus, now free and determined to destroy the Gods forever. Typhon also interjects regularly as you travel across the Golden Isle setting, as he’s none too happy that you’re helping out the four gods this beast has transformed – Aphrodite, Hephaistos, Ares and Athena. And when I say transformed, I’m not embellishing. The God of War, for instance, is now a rather handsome rooster. The emphasis here is very much on humour, while also giving us insight into the backstories of Aphrodite, Hephaistos, Ares, and Athena within the pantheon.

These iconic gods’ stories are full of fun moments and amusing dialogue.

I really enjoyed seeing how the development team chose to play with each of these iconic gods, and their stories are full of fun moments and amusing dialogue. Each of the areas they’re based in also feels radically different. The green hills, lush forests, azure streams and picturesque islands of Aphrodite’s Valley of Eternal Spring couldn’t be more different from the scorched, arid terrain and towering fortifications of Ares’ War’s Den.

Hermes – emissary of the gods and all-round trickster – is also great value, popping up unexpectedly during missions, and always available at the Hall of the Gods, Immortals’ hub for upgrades and crafting. These are by no means the only characters of myth and legend covered by Immortals. Many of the puzzles, whether they’re about restoring a Constellation or completing a Fresco are also references to classic fables, alongside other nods throughout the world.

The dynamic between Zeus and Promethus is hilarious.

Obviously the more intimately you know these myths and mythical beings the more you’ll get out of the references and the ways in which Immortals deals with them. I enjoyed the fact that the lives of the Gods are basically presented as a cosmic soap opera, but at the same time, a lot of it washed over me as I’m just not familiar enough with the underlying mythology. It would have been nice if Immortals had some supplemental information for players like myself that could help fill in the gaps along the way.

The Gods are far from the only sources of humour in Immortals. Fenyx is treated quite playfully too, ensuring that even routine things like opening treasure chests or upgrading an attribute brought a smile to my face.

The Golden Isle is a pretty alluring destination. Immortals’ painterly presentation can be quite striking as you gallop through lush meadows or take in the sights from a clifftop, while the day/night cycle ensures the tone of the landscape is always evolving. Fenyx is very capable within this world too; like Link in Breath of the Wild, he or she (you can choose) is able to climb basically any obstacle given enough stamina, then glide towards whatever destination you’ve picked out using the Wings of Daedalus.

Exploration, though, is where Immortals stumbles a bit relative to its obvious inspiration. Fenyx’s Far Sight ability diminishes the joy of discovery somewhat, reducing it to a mechanical process of climbing to a vista, scanning the world, and marking out collectables and challenges – whether they’re visible or not. This takes a lot of the mystery out of the world.

It’s one thing, after all, to climb a peak and spot something in the distance, then drop a pin on it to remind yourself to go and see what it is. It’s quite another to be able to systematically work your way across the entire map waiting for controller vibrations, then mark exactly what’s in that spot – be it a treasure chest, Vault of Tartaros or one of the numerous challenge archetypes. Every time I used Far Sight I’d typically add ten or more new destinations on my map with next to no effort.

To be honest, I’d much prefer not to know what’s in that deep chasm before I jump down to explore it. And likewise, I want to climb a craggy cliff jutting out of the sea just to see if there’s something up there, not because I know for a fact a shimmering nugget of Ambrosia is waiting.

The Golden Isle is fun to roam around, with plenty of optional combat and some truly impressive vistas.

Of course, I don’t have to use the functionality, but to me the fact that it’s included at all says that Immortals is more concerned with the destination than the journey, and that was largely borne out in my time with it. While Immortals does use a stamina system for gliding and climbing, my plentiful supply of easily crafted stamina potions ensured that I could still quite easily get to wherever I wanted. As such, the environment itself wasn’t much of a puzzle, which is a real shame for an open-world game.

Despite this, The Golden Isle is still fun to roam around, with basic collectables to gather and discover, plenty of optional combat, and some truly impressive vistas.

Regardless, many of the destinations in Immortals aren’t what I’d describe as riveting once you reach them. It’s not that these challenges are bad – they just have no ambition whatsoever. That murky chasm I mentioned earlier? Turns out its deep secret was a puzzle where I had to shoot flaming arrows into three braziers to open a door. Then, 20 metres further along, I had to find three switches to open another door. Then a bit on from that, there was a puzzle where I had to find three weights to put on three pressure plates to open yet another door. I’m not even kidding.

A large percentage of the puzzles in Immortals revolve around cookie-cutter gameplay like this. Immortals is grounded in pushing, pulling, lifting, stacking and throwing blocks… most of the time to trigger switches on the ground. That school of puzzle design is so old-school it makes the Greek myths feel practically contemporary.

That school of puzzle design is so old-school it makes the Greek myths feel practically contemporary.

It’s not just blocks and crates, either. I also had more than my fill of puzzles where I had to roll balls through mazes, guide flaming arrows into braziers or find the missing object to put on a plinth. One moment it’s an apple, the next a cabbage, but functionally it’s all the same. The puzzles in this game, whether in the overworld or within the Vaults of Tartaros, really do feel like they’re all just variations on a handful of basic concepts over and over again.

To be clear, none of these are badly designed, and I didn’t actively dislike doing them. I just wasn’t excited by them, nor did they really test me or surprise me. Less would most definitely have been more in Immortals. Coming back to that chasm again, imagine if instead of three obvious and functionally similar puzzles there was just one that really rewarded observation and understanding its systems? I’d much prefer one satisfying puzzle that demands invention and lateral thinking than three utterly bland solutions. Instead, it feels as though the puzzles are largely there to fill the map, not to engage us.

None of these puzzles are badly designed, I just wasn’t excited by them.

Immortals’ puzzles are ultimately a means to an end – they’re a source of gear and loot that can be used to gain more stamina, unlock new abilities, upgrade potions and so on. And in this capacity they at least help ensure Immortals’ fast-paced combat stays engaging throughout.

Combat is absolutely a strength in Immortals, and the world map is positively littered with foes to fight, so any time I felt like letting off steam, some stylish hacking, slashing and wielding the powers of the Gods was never far away. I loved swapping my armour and weapons around to use their perks, as well as unlocking new abilities to give me more options in combat.

Wielding the powers of the Gods was never far away.

Taking a look at the skill trees, I largely focused on upgrading Fenyx’s ability to dodge in the air and on the ground, and then follow-up attack out of dodges. As is the way in video games, dodging as an enemy attacks slows time, and I took advantage of that by extending her sword and axe combos too. Alternatively, I could have focused on counters out of parries, or running attacks, or ways to do damage while airborne. I could even have ignored the skills altogether and gone all in on the Godly Powers.