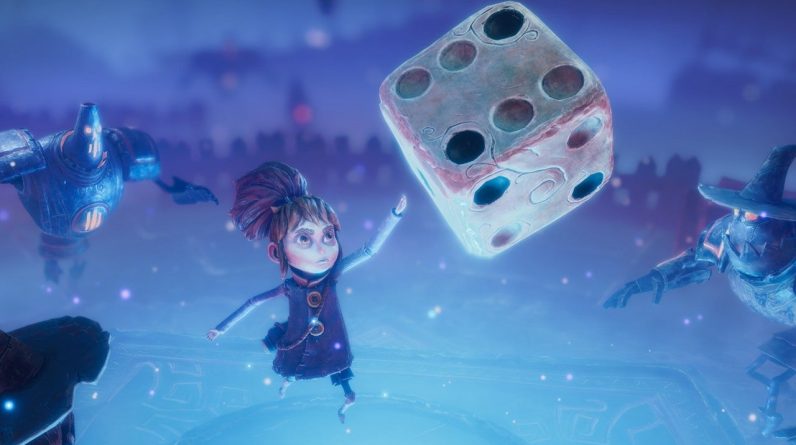 Lost In Random got its first reveal at EA Play Live last week – but that reveal didn’t tell us too much about what it actually is. Thankfully, I got to speak to its directors, Klaus Lyngeled and Olov Redmalm from developer Zoink!, and discovered that the stop-motion inspired, dark-cartoon game coming next year will be a “light RPG” with action-based and tactical combat, and an intriguing (and still somewhat unexplained) board game twist.While last week’s reveal was designed to be a mere tease of what the game has to offer, it perhaps led a few people off-track. “People have been saying, ‘So, it’s a puzzle-platformer!’”, says Lyngeled.

“It’s not a puzzle-platformer.”

Instead, it’s what the studio’s calling a ‘Light RPG’.Written by Dinosaur Comics creator (and long-time Zoink! collaborator) Ryan North, Lost In Random is set in a world where every 12 year-old must roll a magical die, and is then assigned a region to live in and a life to live based on their results of their throw. A role for a roll, if you will. After the heroine, Even sees her sister Odd placed in a new region, she breaks the rules by setting off to look for her, and discovers her own personal magical die, Dicey, that allows her to fight back against the regime set by the (as yet unspecified) dark forces in charge.

That adventure takes her through the world’s six kingdoms, each themed after their side of a die. “For instance,” explains Redmalm, “in Two Town, everyone has two personalities, and they swap every day when this evil force rolls the dark dice. In Three Town, there are three triplets waging a civil war against each other over a family dispute.” Each of those areas should offer a “really different” setting for the game’s cartoon-gothic look, inspired by A Nightmare Before Christmas, Over the Garden Wall, and Grimms’ Fairytales.

So what’s the game around those explorable areas? “You go around and talk to characters – it has dialogue trees, you can go up to characters and talk to them, and everything is fully voiced,” Lyngeled tells me. “So that bit is a little bit like a very light version of Skyrim – it really feels like you can dive into the world and talk to the characters, find quests, and figure out what’s going on.”

And when that exploration, and those quests, inevitably have you come up against the armed forces of the people in charge of Random, that’s when the battles begin. “It’s a mix between full-on action and then a bit of tactics,” explains Lyngeled. That’s a seamless process, too: “It’s a very fluid dance between action and tactics,” adds Redmalm. “It’s an action-adventure with a twist”.

It’s not clear exactly how we’ll be performing that fluid dance just yet, although trailers have shown Even wielding a giant mace as well as a bow and arrow – so it appears we’ll be wielding multiple weapon types – and Lyngeled explains that the section of the trailer that shows the world around Even being paused is a hint about what’s to come (perhaps meaning you’ll be able to pause the action to make tactical choices, before diving back into the fray).

Dicey factors into that action in some regards. While there will be sections where you control him directly, Dicey’s main function seems to be in giving Even her powers as she fights: “Rolling Dicey enables you to become this superhero – he’s like this crazy jack-in-the-box of powers that he gives you,” says Redmalm. Fittingly, of course, those powers are subject to your rolls – you might get lucky in a situation, or you might not (although Redmalm makes clear that even when you fail to get what you want, it should feel thrilling).

There’s another random element to the gameplay that the directors simply won’t tell me about in detail right now, with a tease about how board games are also an element of Random’s gameplay. “Board games are built into the world itself,” says Lyngeled, “and you sort of get stuck in them. Part of it is of course using some of the mechanics that Dicey can do – you know, running while throwing the dice.” He laughs nervously, and stops there. “I’m always saying too much.”

Zoink!’s developers are very keen for you to know that there’s more that remains unseen. “In this reveal trailer, we didn’t even dive into really the gameplay mechanics of it – and they are quite unique. There’s hints of it. Obviously, because we’re not showing so much gameplay, everyone just focuses on the art design, and I’m happy that they do that. But for us, we can tell great stories and we can make great art, but I think what we’re really trying to focus on right now is really making sure that it’s a great game design.”

Lost In Random already sounds like a more interesting, unusual proposition than we’d assumed when we saw it last week – once it arrives for Switch, PS4, Xbox One and Steam in 2021 (with next-gen currently being looked at), it sounds as though we’ll have even more to look forward to.