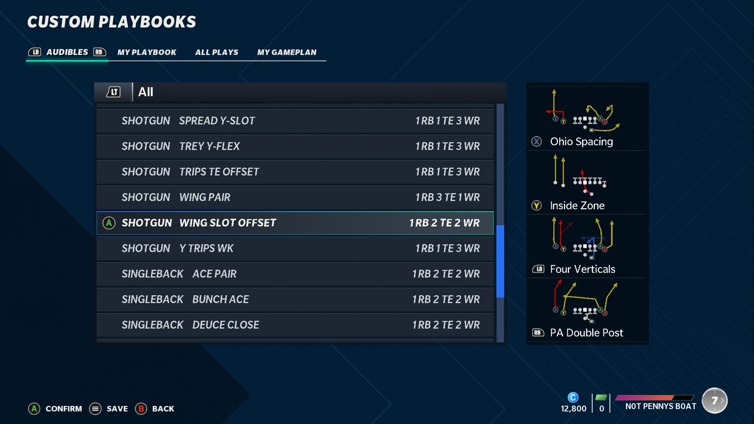 While playbook variety is hugely subjective, some playbooks undoubtedly fit your needs more than others. The best playbooks in Madden 21 on offense is largely about what kind of attack you want to run. A few standard playbooks we love come from the NFC West in the Seahawks and 49ers playbooks.

In the case of the Seahawks, the shotgun-heavy playbook works really well online where players tend to emphasize the blitz more than most teams do in real life. The space and variety of formations within the Seahawks’ shotgun set offers dozens of different looks, so even if you’re coming out in, for example, Shotgun Wing Tight Slots, your opponent won’t know if you’re going to attack the middle of the field, play the flats, or run a draw.

The 49ers playbook is great too, though for different reasons. Like in real life, the Kyle Shanahan scheme is run-heavy with zone blocking efforts on many plays from the linemen. If you’re the type (like me!) who prefers to drain the clock and play ball control, sometimes possessing the football for full quarters at a time, the 49ers playbook is an excellent choice.

While most of these favor the air game, NCAASPREAD offers a range of RPOs (run-pass options) for teams using a shifty QB/HB combination. The FLEXIBLE playbook is great because, as its name suggests, it’s quite balanced and offers the most versatility of any top-rated community playbook. Like the Seahawks, HOLYGRAIL offers a massive range of shotgun looks, with 17 different formations under the shotgun tree.

Defense is a whole different beast in Madden, and in my two and a half decades of experience playing the game, most players actually don’t have a great grasp on playing that side of the ball. For that reason, finding the best playbooks in Madden 21 for defense can be monumental in helping your team,as even a basic understanding of defense can be enhanced with a wider variety of plays. For standard playbooks, I favor the 49ers and the Patriots.

I like the 49ers here, like on offense, because it’s once again an offering designed to take advantage of mismatches even when you don’t have the best players. From a base 4-3, the Niners love to attack the QB early and often, and online in Madden, that is vital, because a QB with a relaxed pocket is a danger to the scoreboard.

Just as Shanahan can seemingly turn any RB into a star on offense, his defensive scheme allows for some confusing and rarer formations to disrupt offenses, including the 46 and 5-2 formations which are excellent against the run.

As for the Patriots, Belichick may not be in the game but his legacy as a mastermind lives on through the defensive prowess of “NE Coach.” The Patriots defensive playbook offers one of the most expansive scheme libraries in the game, offering multiple 3-4 and 4-3 formations, two different goal line defenses, and plenty of pass defense schemes like Nickel, Dime, Quarter, and event Prevent with its own library of plays.

No standard playbook offers this sort of versatility, and it makes sense when you consider the Patriots’ proud history of real-life successes on defense.

Among user-generated playbooks, here are the most downloaded in September:

As is often the case online, HEATSEEKER is a playbook for the blitz-happy Madden players. If getting to the QB is your primary objective, no playbook has been downloaded more. DEFENSIVEBIBLE is the msot versatile of the bunch, most closely mirroring a real NFL playbook with its many looks.

HYBRIDSMOKE, like FLEXIBLE on offense, offers plays for all situations, whether you favor zone or man, and with plenty of blitzes for the right moments. Future, meanwhile, offers the most Nickel looks I’ve ever seen in a playbook with six different schemes using the extra defensiveback. For those games when your opponent has all but abandoned the run, Future is a great options.