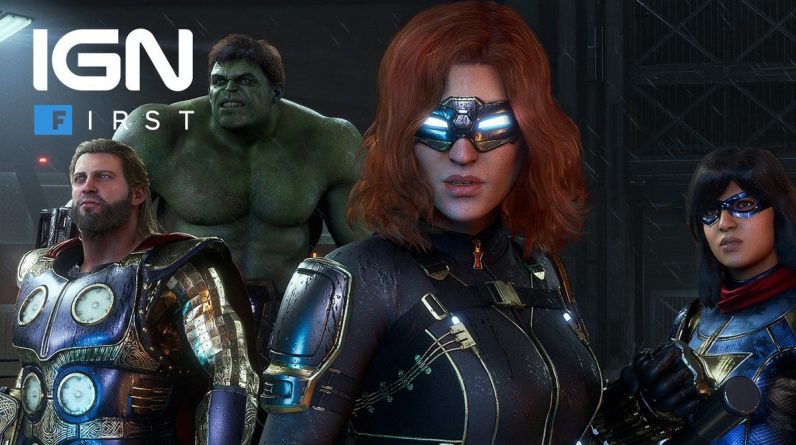 Since Marvel Games reorganized several years ago, it’s been on a mission to pair the right developers with the right Marvel properties. And from Insomniac’s Marvel’s Spider-Man to Team Ninja’s Marvel Ultimate Alliance 3 to Camouflaj’s Marvel’s Iron Man and more, that track record has proven largely successful. Marvel is hoping to continue that trend with Marvel’s Avengers and Tomb Raider developer Crystal Dynamics, an ambitious third-person action-adventure featuring both a single-player campaign and an expanding live-service multiplayer suite incorporating a growing roster of Marvel heroes.It’s no small undertaking, especially as Marvel’s Avengers will now bridge the cross-generational gap with PS5 and Xbox Series X versions on the way in addition to its PS4 and Xbox One launches in September. But in speaking with Crystal’s Shaun Escayg and Marvel Games’ Bill Rosemann, it’s clear that that ambition stems from both a shared love of the source material, an eagerness to tell a fresh, modern story, and an excitement in bringing a comic book-like form of storytelling to games.“We want to work with the best studios on the characters that they’re passionate about, and let them bring their voice to their Marvel game and really own it. And looking at the games that Crystal has made, their re-imagining of Tomb Raider, that really got our attention,” Rosemann said about the origins of the two teams coming together.

“Our goal at Marvel is: anytime we’re going to give a take on a character or deliver a character in a medium you might not have seen them in, or bring a character back after years of being away, we always think about, how can we re-interpret this character, stay true to the core, really study the DNA, stay true to the core of the character, but then put a new stamp on it to make them relevant and modern,” he continued. “Crystal did that in the past and they had a passion for delivering their version of the Avengers. And when you add that, you get a winning formula. It’s talent plus passion, and you get magic.”“Getting the opportunity to collaborate and to push in a game in a participatory way as a fan yourself, to build a game for a game fans, one that they can enjoy and experience and live as these avatars of these superheroes, and really experience what it would be like being the heroes, it was an opportunity worth [taking],” Escayg added.

With all that passion comes a lot of Marvel favorites. Escayg and Rosemann both spoke to the expansive love for the Marvel universe in the Crystal Dynamics office. But with so many favorite heroes comes the question of what lineup did Crystal want to work with for its take on the iconic Avengers team?

“People have seen the assembling story. They’ve seen that, but the time that we were talking, years ago, people had not seen a reassemble story. And that got our attention, and we started thinking about all the story possibilities of, what would it be like,” Rosemann said of an important starting point. “That entire structure was built around the reassembling of the Avengers team,” Escayg explained of the game’s combination of both single-player and continuous, online, multiplayer storytelling.

“There’s always what we call the core, or the triangle, the trinity, if you will, [of] Captain America, Thor or Iron Man. And there’s always some version of that,” Rosemann explained. He also noted how Black Widow was “right in Crystal’s strike zone” given the studio’s Tomb Raider work, while Hulk opened up plenty of story possibilities, particularly being a favorite of Escayg’s.

But a key component to making Crystal’s take on the Avengers feel so unique came in the introduction of Kamala Khan, aka Ms. Marvel. Rosemann described how the journey she would take is “a journey of the player, the player going from, ‘I’m a fan of the Avengers’ to ‘I can be an Avenger.’”

“They’re disassembled. She’s the glue, the conduit that is drawing these heroes in,” Escayg said, noting how she allowed for the studio’s campaign to explore each character. “Depending on how much you want in terms of play, you can go and explore more of it, or you can explore the immediate versions of them. Where were they? What happened to their technology? What happened to Tony Stark’s technology? How was it being abused? What has Bruce been doing? Has he been searching for Cap? What was on his mind during those five years. Thor, Widow, et cetera.”

And Kamala has been that glue since the onset — as Rosemann noted in our interview, the original Avengers reveal trailer back from 2017 featured a mysterious voiceover talking about the reassembling of the Avengers. That voice was Kamala Khan’s.

Part of the clear reverence for the source material Rosemann and Escayg showed in my time speaking to them was a shared ethos about what makes a great Marvel story.

“It’s that grounding in story,” Rosemann said. “That’s what Crystal does so well, and that’s what fans expect from a Marvel experience. Yeah, there’s costumes and powers and cool settings and crazy action, but a Marvel fan wants that story, that grounded, human, accessible, believable, relatable story. And our fans are really smart. It’s got to be logical. It’s got to make sense.”

“If I go to Bill tomorrow and said, ‘Hey man, I’ve got a story, and here’s how it ties in,’ as long as that is sound and that narrative has got that structure, we’re ready to go,” Escayg said.

“Once you do that, you can have things like a helicarrier. It flies. It doesn’t just go in water. It flies. That’s awesome. Thor is an Asgardian. Okay, great. People will go with it. As long as there is that strong, relatable story, then we can go crazy with the action. And that’s what Crystal brings to it, that grounded story. That’s the foundation. And then, layered upon that, is the crazy awesome action that you’re going to experience when you play Marvel’s Avengers.”Rosemann specifically pointed to the Marvels limited series from the 1990’s, which followed photo journalist Phil Sheldon (who you might have spotted in the Marvel’s Avengers War Table presentation) over decades of Marvel history, offering a glimpse of the Marvel world from a human perspective. That balance between human and superhuman is core to what Marvel and Crystal are hoping to achieve. And while we’ve gotten plenty of hints about how its expansive, ongoing storytelling will be mixed with hero-specific, customizable gameplay, Escayg and Rosemann made it clear that that grounded backbone is key to having this new adventure connect with Marvel fans.

“We talk about – we’re building this dragon, right? And if you build a dragon and you want to have the wings and the horns and all of that, but if the dragon doesn’t have a steel spine, then it will collapse,” Rosemann said. “[That spine is] that grounding in story. That’s what Crystal does so well, and that’s what fans expect from a Marvel experience.”

Editor’s note: This story has been updated to fix a transcription issue with a quote regarding Thor. He is, as you would expect in a Marvel story, Asgardian. Apologies for any confusion.