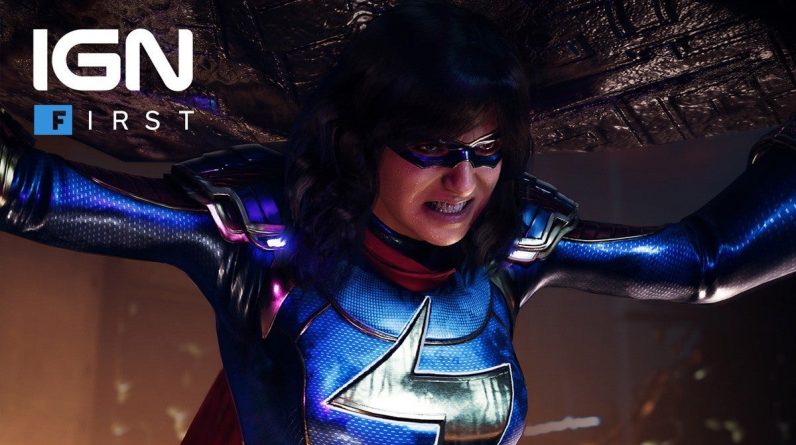 Marvel’s Avengers will feature some familiar faces to Marvel fans who may not be steeped in years of comics lore. Even if you’ve just been brought into the Marvel fold by the MCU, chances are you’re pretty familiar with heroes like Iron Man, Captain America, Hulk, and more.But Crystal Dynamics’ upcoming expansive adventure adds in a few key characters that more casual Marvel fans may not know as well — Kamala Khan, aka Ms. Marvel, as a hero and George Tarelton, aka M.O.D.O.K., as the story’s villain.IGN spoke with Avengers creative director and writer Shaun Escayg about the studio’s attempts to make a unique, modern Avengers story, and how their spin will hopefully offer fans something fresh and unexpected.

Marvel’s Avengers isn’t an origin story, it’s a tale of reassembling the iconic hero team. As Marvel’s Bill Rosemann previously told us, even general Marvel fans are pretty aware of what the superhero team’s origin stories look like. But in figuring out how to craft a story of reassembly, Escayg explained how figuring out who was the one bringing these heroes together led them to Ms. Marvel, both on gameplay and narrative levels.

“One, from a game structure, of going out and meeting your Avengers, and assembling your team, and then building them up, as well as a narrative structure of this protagonist that would see the Avengers and their humanity, and celebrate their mistakes, their empathy, their conflicts, and understand that this embracing of these things is what makes these heroes great, led us down the path of Kamala Khan,” Escayg said.

“She is a fan like we are, as players are, and she sees the heroes like we do. And she even approaches it more from a participatory type setting, which, to me, is the best blend of both gaming and storytelling.”

Lead combat designer Vince Napoli even told us how Kamala’s love of the heroes plays into her gameplay — many of her moves are inspired by the combat abilities of the other playable Avengers.

Kamala was a personally important inclusion to Escayg, as he’s a first-generation immigrant and Kamala is the daughter of Pakistani immigrants. He and the team understand the weight her experiences carry, and also understand how her perspective can speak to fans who have ever felt lost or alone and found solace in the stories of these superheroes.“I think a lot of people can relate to not truly fitting in anywhere at some time in their life, and finding solace and conflict in these superheroes, or finding this mutual olive branch between people who love these heroes,” he said. “And that’s where Kamala Khan is particularly powerful for us as our player perspective and introduction into this world. She gives us this view of these heroes, and she’s on her back footing in relating to her environment and feeling like an outcast. But these heroes give her comfort, and they bond her with this new environment that she’s navigating.”

Kamala’s introduction into the story balances both the themes of ostracization and hope for reassembly that play so deeply into her and the Avengers’ story.

That’s the DNA of a true superhero that we can all relate to.

“She goes to A-Day, and to add insult to injury, she’s infected, further ostracized. But still, that hope, that unrelenting, undying hope,” Escayg explained. “That’s the DNA of a true superhero that we can all relate to. And it’s not a power that is foreign or alien, it is something within us, innate in us, that can say, ‘We are all superheroes. We can all aspire to that.’

But Marvel’s Avengers isn’t just exploring how the Avengers come back together — it’s dissecting what broke and kept them apart for years after the events of A-Day, which we saw when Avengers was showcased at E3 and Gamescom 2019. Escayg described the central conflict, which introduces A.I.M. and the villain M.O.D.O.K., as one of “science versus superhero” — with Tarleton and Kamala representing the two sides of this debate.

“It’s not just the Avengers have broken up several times as you’ve seen in comics, and in the MCU, over this struggle with their superpowers. But this was more of public perception that they’re not heroes at all. And in that vacuum, what could offer the alternative, which is science as an answer,” Escayg said.

“What if we harness these superheroes powers? What if we use technology to make these decisions, to control it, to make it AI perfect,” he explained of the viewpoint A.I.M. and M.O.D.O.K. offer the world. “Then if that can happen, then why do we need these emotional beings that are super powerful that wreak havoc? Maybe we can find a more pragmatic approach to protecting the world.”

Those questions then even tie into the heroes’ doubts about themselves, Escayg explained. Whether it’s Bruce Banner’s scientific background or Tony Stark’s concerns about his technology falling into the wrong hands.

But in a world where science has seemingly supplanted heroes after A-Day, Kamala, now an Inhuman and with powers of her own after loving these heroes for so much of her life, presents an alternative — even if it’s one the Avengers aren’t immediately ready to accept.“The Kamala argument is the opposite argument, which is, these differences are what make the Avengers strong. Embracing who we are, understanding who we are is what makes the Avengers strong. They are their empathy, and I would even say their mistakes, particularly their conflicts. These differences are how they can relate to humanity, because they are us. And by that extension, they are the best protectors of us,” Escayg says of Kamala’s viewpoint.

And while it’s a viewpoint Marvel’s Avengers will explore in its campaign, it’s also a theme that can continue to be mined for story in the future. Rather than offering just a self-contained story, Avengers will continue its life with new heroes and locations and story introduced via its War Zone missions. Escayg spoke to the challenge of wrestling with these ideas both within the story but also in planning out the future of Marvel’s Avengers.

“It was a theme we knew we couldn’t resolve fully. We could only get the team together and know that there’s a lot more work to do for the Avengers, and heroes to come in this world that would push those narratives and those themes further,” he said. “It gives us a much wider story pallet to choose from and to introduce new ideas and challenges to this theme.”

For more, be sure to check out our hands-on preview with Kamala Khan and Thor in Marvel’s Avengers and learn how Crystal Dynamics and Marvel came together for Marvel’s Avengers. And stay tuned for more from our IGN First coverage all month long.