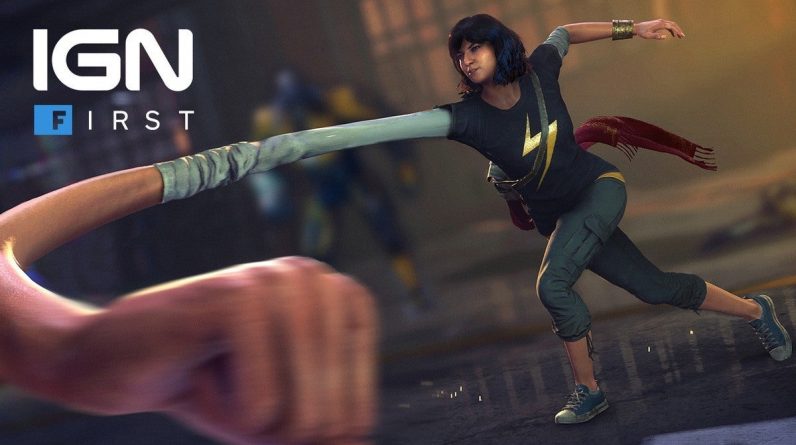 Crystal Dynamics is certainly aiming to give each playable hero in Marvel’s Avengers their due, with unique combat systems, costumes, hero-specific campaign missions, and more. But at the heart of its original story is Kamala Khan, the newest hero in the Marvel canon to be among the playable lineup. She’s also, as creative director Shaun Escayg has previously told us, a main viewpoint for the players in the “science vs. superhero” argument that’s core to the story.IGN spoke with Kamala Khan actress Sandra Saad about bringing the character to life in arguably her biggest starring Marvel role outside of the comics and ahead of her MCU debut in an upcoming Disney+ series.And in choosing to have Kamala as the entry point for players into this version of the Avengers story, Saad sees a lot of broad and specific ways players can relate to her story.

“Every single hero has that struggle of, ‘How do I work with what I’ve got? How do I not be destructive?’ I feel like Kamala is just starting to get to know her powers,” she said. “There is that fear of also, ‘Oh, is this a weird thing? Does this make me an other or is it cool?’ With every person and with every hero there is that struggle of working with your humanity and working with your powers and kind of balancing them out.”

Of course, important to Kamala’s comic history as the daughter of Pakistani immigrants to America, and the gravitas of that story is something Saad, a second-generation immigrant herself, understands in bringing the role to life.

“Growing into your own, as a young woman of color, I run into a lot of the same challenges that she does as far as just wanting to fit in with your American friends,” she said. “I have my own things about me that make me unique from where my family comes from, just as Kamala, and growing up, I tried to stifle all of that so that I would fit in with my American friends. It didn’t matter at the time if I actually liked the things they liked… I’ve seen a lot of that with Kamala too, but as I grow, I find that it is important to embrace those things about me that do make me unique.

“This game has kind of taught me to really embrace them because those differences are my power as it were.”

Another important facet of Kamala’s character is, of course, her role as a fan of the very heroes she ends up fighting evil alongside. The aspirational nature of that is something Saad hopes fans new and old can take away from her portrayal.

“The fact that this young girl gets to meet her heroes and gets to fight with them and becomes one of them, it’s so exciting,” she said. “To bring that to a superhero, I can’t wait for more young, 16 year old girls to see themselves in this character, and everybody can see themselves in this character. Everyone’s been a fan of something and meeting your heroes is such a marvelous thing in itself.”Saad found it easy to relate to this aspect of Kamala’s character, given the rest of the Avengers team includes video game acting stalwarts like Troy Baker, Laura Bailey, and Nolan North.

And Saad described the entire process, whether on the mo-cap stage or on the page, or with the various teams involved from Crystal Dynamics and Marvel Games, there was always a fervor and excitement to bringing Kamala and this Marvel story to life.

“It’s been really nice to sit with [Shaun Escayg] and talk about the process of Kamala and how she came to be such a part of this game. It’s just such a team effort,” she said. “I did a lot of research on my own and there’s a lot of sitting with the scripts that I do, but at the end of the day, it all really comes together when I’m on stage with the other actors and on stage with Shaun talking about the character and how she came into whatever scene we’re working on.

“Crystal has been doing such a great job at developing this character, so seeing all of her abilities come to life has been really cool. It’s been great to help me inform my imagination to bring this character to life.”