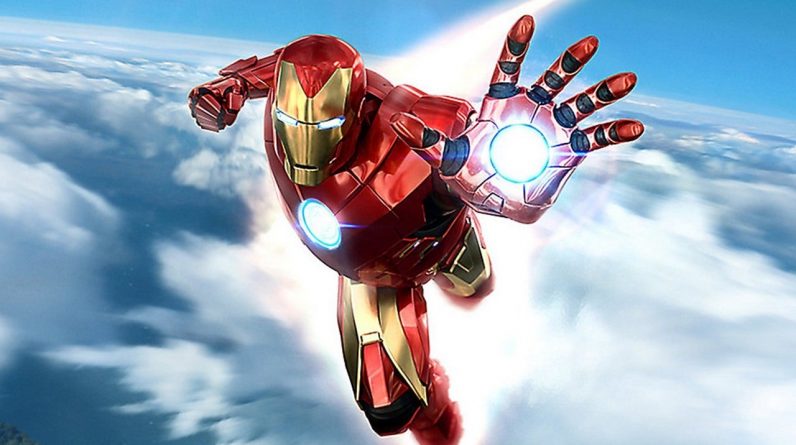 It’s a testament to how far VR games have come that I can spend hours at a time flying around in my very own Iron Man suit without feeling even the slightest bit of motion sickness. Marvel’s Iron Man VR makes impressive use of PSVR and its now thoroughly outdated PlayStation Move controllers as an amusing, high-flying action game dotted with superhero flair throughout. But while I enjoyed my time in the iron mask, repetitive missions and a bland story keep the PS4’s latest Marvel exclusive from ever flying too high.

In case this wasn’t abundantly clear, Iron Man VR is a PSVR exclusive where you take first-person control of Tony Stark himself in and out of the suit. That means using hand-directed repulsors to nimbly soar through the air while shooting down robotic enemy drones, but it also means walking around his lavish Malibu home and upgrading your suit between the missions of its linear campaign.

These moments as Tony are often little more than a vehicle for story exposition and the occasional equipment upgrade, but they’re still a welcome change of pace when you otherwise spend most of your time in the air. His house is full of cute little interactables like books, edible food, and even a functional arcade basketball game. They’re simple gimmicks that help put you in Tony’s shoes, but also aren’t detailed enough to be worth more than a quick glance if this isn’t your first foray into VR (with the exception of that basketball game, which is genuinely fun).

Iron Man VR’s story takes place on well-trodden ground as Tony struggles with the ramifications of his past life as a war profiteer, this time while up against the villain Ghost. While it can be entertaining, the plot here falls flat thanks to both its laughable predictability and the blunt way it’s presented. It’s the antithesis of the phrase “show, don’t tell,” relying on stationary, exposition-heavy conversations, as well as black voids where you just stand there and listen to Tony explain his feelings between only loosely connected missions. The story wasn’t enough to get me emotionally invested in Tony’s journey – especially when serious moments were frequently undercut by his big, dumb shoulders in the corner of my view or his deformed, wobbly arms grasping at props I wanted to interact with but couldn’t.

Thankfully, you’re not really here to play as Tony Stark: you’re here to play as Iron Man, and in the superhero department Iron Man VR delivers. Every mission is essentially an aerial dog fight with other objectives like defusing bombs or protecting a target thrown in – but Iron Man isn’t a jet, and he doesn’t fly like one. Instead of familiar analog controls, pulling the triggers will turn on your hand repulsors and push you away from whatever direction your palms are facing. Point them back and you’ll rocket forward, down and you’ll gain altitude, or sideways and you’ll strafe through the air.

This system gave me a great amount of flexibility in my movement, and became second nature by the time I was asked to fight large packs of robots at once or weave in and out of the terrain. You’re not exactly going fast in the middle of a brawl, but you aren’t bound by forward momentum like a plane either, and that makes you nimble. There’s just something oh-so-satisfying about seeing an enemy charging up an attack, flicking your palms back to boost past them, and then blasting them to bits from behind.

And it’s good that it’s fun, because you’ll pull off that move a lot. There are only six basic enemy types in Iron Man VR (all different robotic drones), but they make you move and fight in ways that are more than just simply pointing and shooting. One enemy is easy to take down but will put a shield around others, while another is untouchable until you juke its main laser attack and unload while its guard is down. A hover tank enemy will also harass you with destructible missiles from the ground, encouraging you to use a powerful Rocket Punch to slam it from above.

Enemies make you move and fight in ways that are more than just point and shoot.

I had fun switching tactics on the fly and being kept on my (rocket) toes mid-mission, but the repetitive combat patterns do eventually wear a little thin. Iron Man VR has a content reuse problem – not just in its limited enemy types, but in its locations too, and even some boss fights. Missions tend to blend together when two of them (or sometimes more) play out in the same exact setting, with only mid-fight objectives and a bit of story to differentiate between them. Those objectives add superheroic moments to break up combat by making you head to a specific spot and muscle open a hangar door or stop a bomb, but the fights between those bits of flavor will be awfully familiar wether you’re flying over downtown Shanghai or Tony’s lovely coastside property.

A post-mission results screen offers a bit of a “score attack” element for those looking to replay levels and rack up combos or beat times, but I never felt motivated to retry a mission when I knew more of the same was on the way. That said, completing a mission on a map for the first time unlocks special combat challenges and races (and even a free fly mode) there, which are slightly more compelling reasons to go back than when the campaign just reuses them as generic backdrops. The races in particular can be a lot of fun, as your maneuverability is put to the test in a way the main missions rarely feature.

Completing both optional and main missions will earn you research points used to unlock new tricks for your suit, but this customization is disappointingly static. Nearly every upgrade is available right away for the same cheap price, and few of them offer an objectively “better” improvement. That means the selection of auxiliary weapons, like different types of missiles, and system upgrades, such as choosing between recovering health or ammo faster, comes down entirely to personal choice. On the one hand, that rules, since it lets you quickly experiment with changes to your play style as you find the loadout that most appeals to you – I ultimately landed on the slower charged repulsor blast option to deal big hits paired with arm-mounted machine guns when I needed a quick spray of damage.

On the other hand, this system means progression is rendered essentially nonexistent. Once you buy what you want, further upgrades become pointless because nothing will make you functionally “stronger.” That means I stopped caring about upgrades less than halfway through the roughly six hours it took me to beat the campaign – and while there were plenty of optional challenges left for me to take on, my desire to complete them wasn’t exactly burning when the reward for doing so was practically irrelevant. Some cool suit color variations can also be unlocked by completing bonus tasks, like taking down a certain number of enemies with a Rocket Punch, but looking like Iron Patriot doesn’t exactly mean much in a first-person VR game.

But despite Iron Man VR’s progression problems and reused content, it’s worth taking a moment to celebrate the technical VR achievements made here. Apart from its frustratingly long and frequent loading screens, Iron Man VR is probably one of the better uses of PSVR tech I’ve tried. The clunky, decade-old design of the Move controllers can make weapon switching finicky, but this is still one of the only PSVR games I’ve played that consistently tracked my hands and head nearly perfectly even as I spun in 360 degree circles in my living room. When running Iron Man VR, the PSVR felt surprisingly comparable to headsets like the Oculus Quest or others with more advanced equipment than the single-direction tracking PSVR uses. It’s truly impressive.