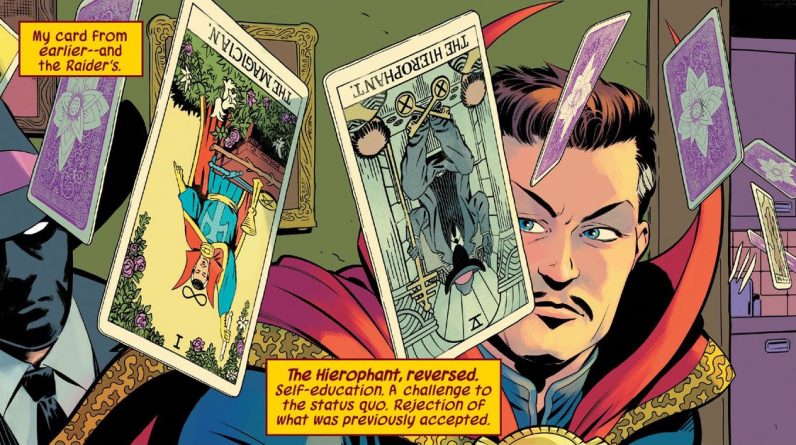 I’ve been a fan of Javier Rodríguez since back in the days of Batgirl: Year One, but I had not quite put it together that he was working on the new Defenders series.

So imagine my surprise to crack open Defenders #1 to find that he’s gone Full Ditko. Rodríguez blends trippy and diegetic magic visuals with non-diegetic stuff like a flashback illustrated through the steam rising from a cup of tea. It’s a ride.

What else is happening in the pages of our favorite comics? We’ll tell you. Welcome to Monday Funnies, Polygon’s weekly list of the books that our comics editor enjoyed this past week. It’s part society pages of superhero lives, part reading recommendations, part “look at this cool art.” There may be some spoilers. There may not be enough context. But there will be great comics. (And if you missed the last edition, read this.)

Marvel Cinematic Universe fans may associate the Defenders with street-level heroes like Daredevil, Luke Cage, and Jessica Jones — but the Marvel Comics superteam began as a team book for Marvel’s most popular weirdos. Doctor Strange, the Hulk, the Silver Surfer; basically anybody who really, really didn’t seem like a team player.

Defenders #1 recruits a brand new team via the medium of Doctor Strange’s tarot deck, which is also used as a visual motif throughout the issue. If that’s not enough to wet your whistle, writer Al Ewing seems to be picking up a few threads from his soon-to-be completed run on Immortal Hulk, including Betty Ross as the Red Harpy, and the idea that the last person alive in the universe becomes the next universe’s Galactus.

Give me a moment to take off my professional journalist hat. OK.

MY FAVORITE ROBIN CAME OUT OF THE CLOSET THIS WEEK AND I’M SO PROUD OF HIM. I REALLY HOPE THIS CARRIES FORWARD INTO TIM SEELEY’S ROBINS SERIES BUT MAYBE THE SCRIPTS ARE ALREADY FINISHED FOR IT? REGARDLESS. MY BABY TIM!

There’s a lot to like in Batman ’89 #1, as the series makes it clear that it’ll be exploring Billy Dee Williams’ Harvey Dent in a way the movies never did, and introducing Barbara Gordon and a new Robin! But also artist Joe Quinones is doing his Quinones-y best with these Tim Burton references.

And Runaways once again enters hibernation with this final issue of Rainbow Rowell’s run on the characters. As per usual for the series, we end on a total cliffhanger with everybody’s emotional status up in the air. Still, the final pages of the issue tease some further developments — so maybe we’ll see those threads picked up in other books? I live in hope.

OK, so, Campisi is a story set in a modern world where a dwindling population of sentient dragons are sort of … a regular pest/natural disaster? And in this small mafia-run town, the gang’s lowliest enforcer/problem solver now has to solve the problem of an actual dragon who wants to kill his boss. I will certainly be reading a second issue.