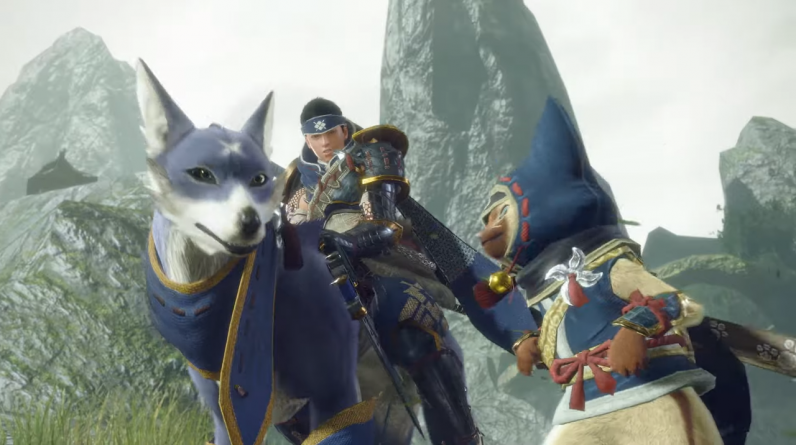 Capcom has announced Monster Hunter Rise for Nintendo Switch. It will arrive on March 26, 2021.The game resembles a traditional Monster Hunter, but with far more freedom of movement, and the Rise title is meant to communicate the idea of verticality, which will be a major part of the game. Players will be able to use new Wirebugs, which act as a grappling hook. The Wirebug can be used in combat too, to allow for more versatile, fast-paced combat.Areas in the game will be seamless, open locations, as in Monster Hunter World

. Your base will be Kamura Village, which will be filled with characters to meet, who will form the basis of the story.

Rise also includes a new dog-like companion character called a Palamute, that can be ridden through the environments, and will aid you in combat. Palicos also return and act as support characters. In single player, players can bring two companions (in any combination of Palamutes and Palicos), and in multiplayer players bring one.

Monster Hunter Rise features a number of new monsters, including fire-breathing bird Aknosom, inflating amphibian Tetranadon, the wolf-like bird wyvern Great Izuchi, and what seems to be the game’s headline monster, the Chinese dragon-like Magnamalo. Arzuros will also return from previous games, with many more returing and new monsters to be announced. As in Monster Hunter World, monsters can encounter and fight each other without the player’s input.

The game will come in standard and deluxe editions. The deluxe edition features the base game and a bundle of DLC including armour, gestures, and cosmetics. Pre-order bonuses will be offered, adding some (tremendously cute) layered armour sets for Palamutes and Palicos, as well as a talisman item to help novices in the early game. Pre-orders for the download version of the game will open today. Three new Amiibo will also be released, of Palamute, Palico and Magnamalo.

The game appears to feature more English language voice acting than previous installments in the series. It’s just one of two new Monster Hunter games announced today, along with Monster Hunter Stories 2: Wings of Ruin – both games will be compatible with one another in some form, although Capcom hasn’t yet said exactly how.

Technically, we had two Nintendo Directs today – you can check out everything announced and shown in them right now.