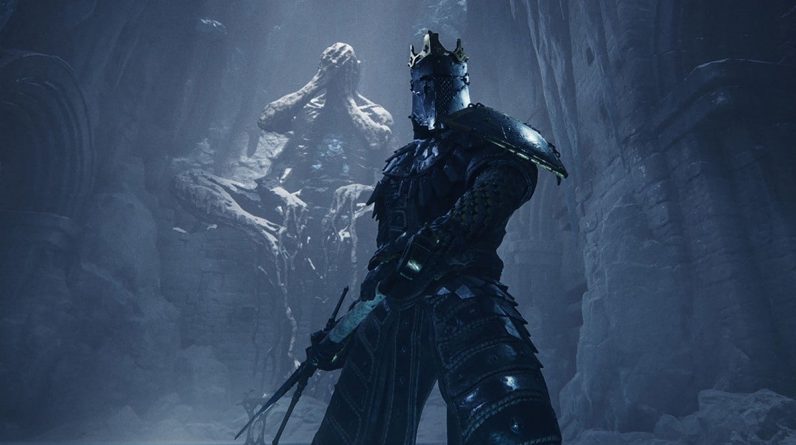 It’s impossible to look at Mortal Shell and not immediately draw the parallels between it and the Dark Souls series, which is fine! If there’s one thing that is incredibly apparent after spending about four hours playing and replaying a demo build of Mortal Shell, it is that developer Cold Symmetry has a deep love and understanding for not just the Souls series, but the entire Souls-like genre. Your character moves like a Dark Souls character, NPCs talk like Dark Souls NPCs, there are item descriptions in the loading screens, combat is impactful and deliberate, and so on and so forth.

But what’s most impressive about Mortal Shell is that for as much as it borrows from the Souls-like formula, it also introduces its own ideas into the mix. They’re ideas that dramatically change how the game is played, and in doing so, Mortal Shell breaks out of its own Souls-like shell and becomes its own beast.

The first large departure from the formula is that there’s no block button in Mortal Shell. And sure, there’s no block button in Bloodborne either, but it’s still handled very differently. Instead, players are able to harden their body to something like stone in order to cause enemy attacks to bounce right off. This is an extremely powerful defensive option, as it doesn’t take any stamina away when you block an attack. It will nearly always cause your opponents to recoil, giving you an opportunity to attack, and you can even harden mid attack animation, allowing you to immediately shift to defense while attacking.

But here’s the catch: Harden is on a pretty substantial cooldown, and without it, your only two ways of defending yourself are a very risky and tricky-to-time parry, and an evasive roll that eats up a lot of stamina.

The other wrinkle in this combat system is that there’s no quick and easy health-restorative item like an estus flask or healing gourd that quickly restores life and is replenished at the game’s equivalent of a checkpoint. There are some mushrooms that heal a short amount over time and a few randomly dropped pieces of food that can be picked up off the ground, but without a way to quickly restore health, taking damage in Mortal Shell can feel devastating.

There is one other main way to restore health on the fly, which is by landing an Empowered Riposte, which is done by parrying an enemy and executing a powerful follow up blow. Doing so requires one bar of resolve, which is a resource that is built up as you deal damage to enemies, but will slowly drain if you don’t keep up the pressure. This plays into another key resource management decision, because if you manage to build up two bars of resolve, you can execute an extremely powerful special attack that deals massive damage and makes you completely invulnerable for the duration.

So what this all boils down to is a combat system where all styles of play have their own risks and rewards. Playing it safe means you won’t be getting a ton of resolve to utilize special abilities, but you’ll likely be more capable of managing your stamina and harden cooldown; and a more aggressive playstyle is rewarded with the ability to potentially heal mid-fight (if you have the skill to land a well-timed parry) and an extremely powerful attack that can kill most enemies in one-hit. It’s a really smartly designed combat system that truly feels distinct despite its roots being firmly established in the Souls-like genre.

Each Shell’s Got a Story to Tell

Then there are the Mortal Shells themselves, which essentially introduce class-based gameplay to the Souls-like genre in a way that hasn’t really been done before. The closest comparison is the blood code system in Code Vein. As you play, you’ll discover new Shells that each have their own unique stats and skills. In my demo, I only came across two: The starting shell, Harros the Vassal, which is a more tanky shell that has increased health, less stamina, and skills that affect his survivability; and Tiel the Acolyte, who has a massive stamina pool, less life, a more effective vanish as opposed to a quick dash as a dodge, and a variety of skills that allow him to occasionally take damage to stamina instead of damage to health, grant him extra damage on a successful riposte, and heal some of the damage taken by poison, which was a massive pain in the ass throughout the demo.

Shells can be swapped out at certain spots in the world, or an item can be used to swap them out on the fly, allowing you to make use of their unique characteristics as they become necessary.

As you’d imagine, when you defeat enemies you collect a currency that is used for both character progression and for buying items from the various shops. But unlike what you might imagine, character progression in Mortal Shell doesn’t take the form of traditional level ups. Instead, you use this currency, known as tar, to first learn the name of your equipped Shell, which then opens up their skill tree. Each skill costs both Tar and another currency called “Glimpses” to learn. Glimpses are gained by beating certain enemies or by finding itemized glimpses in the world, but unlike Tar, glimpses are only granted upon the first time you take them out. This I imagine, is how Cold Symmetry discourages players from farming easy enemies repeatedly in order to max out a character’s skill tree right away.

Glimpses are also an appropriate name for this currency because each new skill you purchase gives you a glimpse into who that Mortal Shell belonged to. It’s a very clever way to ground the character in the world and I can’t wait to see how it plays out in the full game.

It’s also worth noting that Mortal Shell has a Sekiro-esque second chance system in play. When you lose all of your health, your main body will actually get knocked out of whatever shell you were using. At this point, it’s one hit and you’re dead, but if you manage to get back to your shell and re inhabit it, you’ll regain all of your health and be right back in the fight. This ability only works once though, and once you use it, you won’t get it back until the next time you rest. Of course, if you do die, you’ll drop all of your tar at the spot where you were killed and if you die again before you’re able to get back and reclaim it, it’s gone for good.

All of this is great, but not everything involving Mortal Shell is without concern. I played the game on a PC build and was met with at least five crashes in just the relatively short amount of time that I played, which feels awful, especially in a difficult game like this where a crash can cause whatever momentum you built up to come to a halt. That said, it is of course an early build, so it’s not entirely unexpected but nevertheless something to keep an eye on. The aforementioned poison in the second part of the demo also feels absolutely oppressive with no item that is able to cure it and with the most common enemies inflicting it on every basic hit.

There’s also a bizarre mechanic that forces you to use an item before you’re able to know what it does, which is cool in concept, but in practice makes item usage unnecessarily risky and punishing since you could eat something that inflicts a negative effect without having any indication that it would do so.

All in all though, Mortal Shell left an extremely strong first impression, not because of how much it evokes the look and feel of Dark Souls, but because of how it evokes it while also feeling like something completely fresh and unique. You can check it out for yourself when the beta for Mortal Shell drops on July 3.

Mitchell Saltzman is an Editorial Producer at IGN and is a long-time lover of all things souls-like. Demon’s Souls, Dark Souls, Bloodborne Souls, Sekiro Souls, he loves them all.