We haven’t regularly covered the MotoGP series in the past but the motorcycle specialists at developer Milestone have been quietly iterating on it for over 15 years. With all that experience, it should probably come as no surprise that the latest edition, MotoGP 21, is a deep, satisfying, and sometimes unflinchingly tough modern motorsport simulation. It’s packaged fairly similarly to Codemasters’ F1 series and KT Racing’s WRC games, only with 50% fewer wheels and 500% more terrifying crashes.

Of course, if you’ve been keeping close track of its progress you’ll find that MotoGP 21 is a lot like MotoGP 20 – identical even, in some areas – although there have been a couple of welcome tweaks that do genuinely improve the bike handling and the racing.

MotoGP 21’s sensation of speed is quite remarkable, especially in first-person, and the feeling of weight is also excellent. On track the racing is aggressive and dangerous: relative to last year’s game, changes to the suspension system means the bikes feel more alive over bumps, and particularly under heavy braking. Milestone has also added brake temperature management, which augments the racing with yet another layer of strategy to wrestle with. Brakes that are too cold or too hot, for instance, won’t be as effective, and I definitely noticed when the bike wasn’t pulling up as quickly.

Changes to the suspension system means the bikes feel more alive over bumps, and particularly under heavy braking

Off the track, there are plenty of staff opportunities and R&D tasks to juggle to improve your bike’s performance – of course, that stuff has become pretty typical in modern motorsport sims, including MotoGP 20. From researching upgrades to establishing a junior team, MotoGP 21 sticks closely to last year’s script.

MotoGP 21 is an extremely demanding racer, though, and the degree of difficulty increases exponentially the more you lower the riding aids, which offer assists like throttle and braking input modulation and a cornering assist that irons out frantic left stick inputs – basically an invisible guiding hand to help the bike dip left and right more smoothly. Even with those crutches, however – and even against relatively sedate levels of AI competition – MotoGP 21 requires a high level of finesse to succeed. As a result, pulling off a win or placing well after a great fight on track is a rather rewarding experience.

For racing fans yet to try Milestone’s series, MotoGP 21 turns out to be a good year to jump in thanks to a new tutorial mode that adds an extremely useful launchpad for getting accustomed to MotoGP’s tricky brand of bike racing. MotoGP 20 never took time to educate you on how to ride or even how to use your bike’s systems, but this year’s instalment rectifies that with a simple series of playable lessons outlining everything from straightforward bike control, to fuel management, and to electronic systems like engine brake, anti-wheelie, and traction control – all of which can be adjusted on track, on the fly. As such, despite its otherwise steep difficulty curve, MotoGP 21 is probably the most beginner-friendly MotoGP game in years, and I think the effort to make it slightly less impenetrable for newbies is a very good move.

The rewind feature also returns to take the sting out of learning to ride in MotoGP 21, and unlike in Milestone’s Supercross 4 it’s an unlimited resource here. I for one think that’s a more sensible approach; it certainly makes it more forgiving on cack-handed maniacs like me.

Of course, if you’re a complete purist, rewinds and all other assists can be reduced or toggled off to force you to suffer the full consequences of coming off your bike so that you can experience one of the most notable new additions this year: a full, manual bike-retrieval sequence. That is, after coming off you won’t automatically respawn on your bike; you’ll need to jog over to wherever the bike came to a stop, lift it up, and hop back on. I actually really like how this looks in-game – and it’s certainly a cool, authentic little sequence to layer into the racing – but the fact that manual bike retrieval is only applicable to humans and not the AI means it’s enormously and fundamentally flawed. How is it fair that the AI racers still respawn on their bikes instantly, speeding away while I was still hoofing it back to my own bike? It’ll be neat if this is fixed in an update, but in its current form the function is pointless to use. 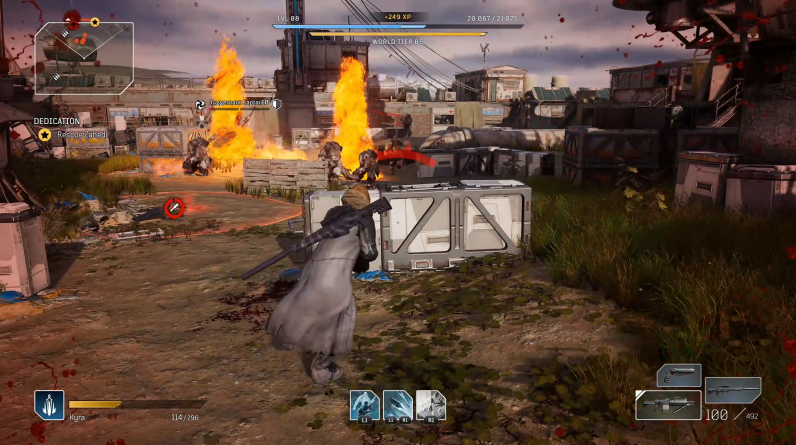