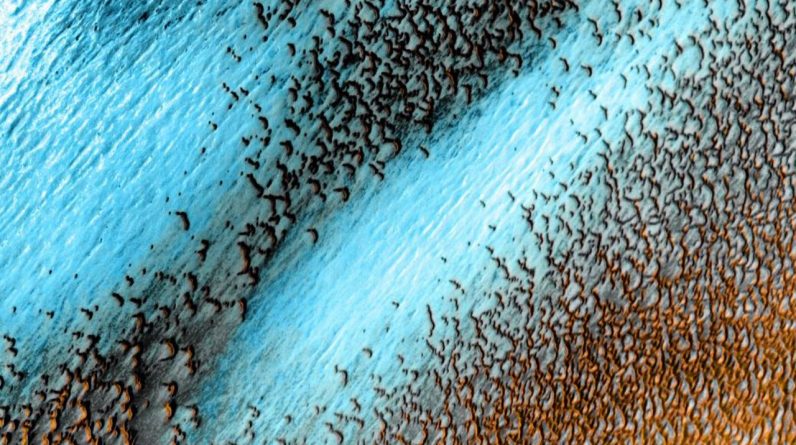 NASA has released a new image of Mars’ blue dunes and it looks more like an alien planet from Mass Effect than one from our very own solar system.Despite the image being new to our eyes, it’s actually quite an old photo. The image below was made using multiple photos captured by NASA’s longest-working Mars spacecraft, the Mars Odyssey orbiter, in between December 2002 and November 2004.

More specifically, it’s an image created by combining multiple photos captured by the Odyssey’s Thermal Emission Imaging System and while it might not be obvious when looking at it, the image below covers 19 miles of the Red Planet’s landscape.

“A sea of dark dunes, sculpted by the wind into long lines, surrounds Mars’ northern polar cap and covers an area as big as Texas,” NASA’s post about the image reads. “In this false-color image, areas with cooler temperatures are recorded in bluer tints, while warmer features are depicted in yellows and oranges. Thus, the dark, sun-warmed dunes glow with a golden color.”

This is yet another look at Mars, which has been NASA’s focus lately. NASA landed its latest Mars rover, Perseverance, on the Red Planet less than two months ago and one day later, NASA released the first images from Perseverance to the world. Because Perseverance is equipped with microphones, we now know what the surface of Mars sounds like too and spoilers, there’s no heavy metal to be heard despite what Doom has led us to believe.

Sights and Sounds of Mars from NASA’s Perseverance Rover

NASA kept people talking about Mars by hiding a secret message on the parachute of Perseverance. Between that secret message, hearing the surface of Mars for the first time, and seeing its blue dunes, it’s a great time to be someone interested in the Red Planet.

Just in case that’s not enough, NASA’s first-ever Mars helicopter is scheduled to make its initial flight in two days, which will give everyone back on Earth a new 15-feet-up perspective of the planet

Wesley LeBlanc is a freelance news writer, guide maker, and science guru for IGN. You can follow him on Twitter @LeBlancWes.