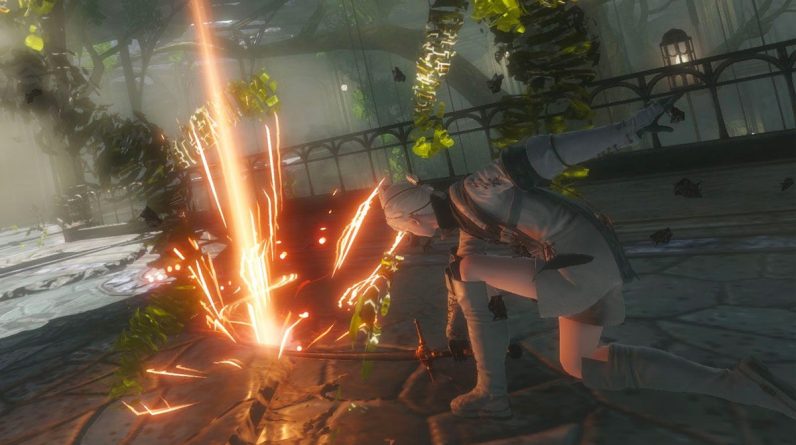 It isn’t easy to come up with a simple and convenient label to describe what Nier Replicant Ver. 1.22474487139 actually is, which is appropriate considering the fact that the Nier series itself is anything but simple.

Is it a remaster? Is it a remake? Well, the answer is that it’s somewhere in between. Replicant Ver. 1.bunchofrandomnumbers takes Nier Replicant – a version of 2010’s Nier that never released outside of Japan and features a younger protagonist – dramatically improves its visuals, brings its combat up to the literal Platinum standard set by Nier Automata, and provides voice acting for every character to bring its world to life, which is certainly going above and beyond your average remaster. That said, this is still largely the same cult classic that was released more than ten years ago.

I’ve spent about 16 hours with Ver. 1.yourdoordashverificationcode, and while I’m limited in what I’m allowed to talk specifically about, my general impression so far is that if you’re a fan of Nier, whether the original or Automata, there’s a lot to like about what this new version has to offer. And if you’re not, well Nier Replicant is the best opportunity there’s ever been to get in on the ground floor.

Combat was a high point of the original Nier, but in comparison to Automata’s graceful dance of swords and bullets, it’s pretty dated. This new version of Replicant does a really good job of smoothing out the animations and making Nier’s combat feel very close to Automata’s. It still has the same basic combat system of having two attack buttons that can be repeatedly pressed for lengthy combo strings, or held down for special attacks that may have guard breaking properties, or are more adept at hitting multiple enemies at once.

In short, it’s very much an action game’s combat system transplanted into an RPG, but make no mistake, this is no Bayonetta. The combat, while exquisitely animated and fun to look at, lacks much of the depth and progression that you’d typically find in an action game along the lines of what Platinum typically works on.

The thing that really makes Nier Replicant’s combat sing is the wonderful Grimoire Weiss, a snooty book voiced impeccably by Liam O’Brien, who serves as the player’s source of magical attacks. There are a wide variety of magical attacks, referred to as Sealed Verses, each of which can be easily swapped between thanks to a quick and intuitive menu that lets you map different spells and techniques to the four shoulder buttons.

While there’s a lot of fighting the same enemy types, Replicant at least does a good job of mixing up the situations in which you fight against those enemy types. It constantly plays with your expectations, switching between 3D, 2D, and top down perspectives fairly regularly, and sometimes even flipping the entire rules of the genre on its head. I don’t want to spoil some of the best examples of this, but if you’ve played the original, you probably know which ones I’m talking about, and if you don’t, it’s probably best for you to experience them yourself anyway. The one part of the game that I can talk about is the Junk Heap, which has a great sequence where you have to ride a minecart through a bullet hell while sniping at turrets and enemies lining the walls.

Perhaps the area that has seen the most improvement though is the visuals. The original Nier did a great job with character models, and that’s reflected in this new version, but its environments were very drab and were often too big for their own good, resulting in a game that lacked detail and had a very blurry and smudgy visual quality to it. This new version on the other hand looks crisp, with draw distance that extends for miles, and really lets the artistic beauty of a region like the Aerie, for instance, to really shine through.

And that’s really the limit of what I’m allowed to talk about on this preview build. Second chances are rare in the world of video games, and it’s great that the success of Automata has seemingly earned the first Nier another shot at finding its audience. Be on the lookout for Nier Replicant Ver. 1.22474487139 when it hits PlayStations, Xboxes, and PCs on April 23.

Mitchell Saltzman is an editorial producer at IGN. You can find him on Twitter @JurassicRabbit