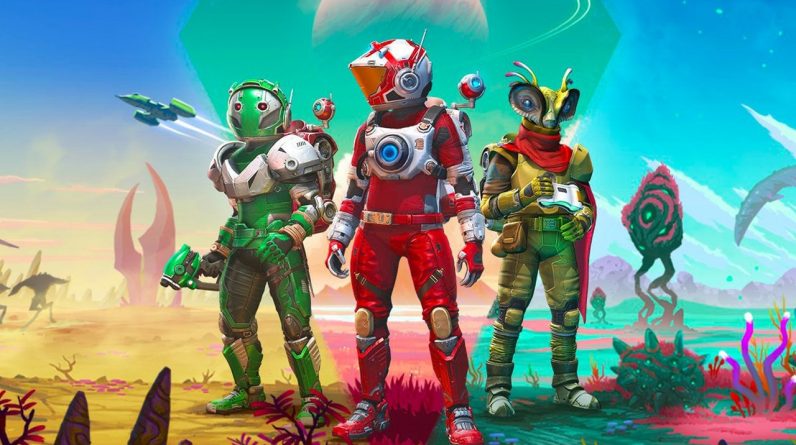 Hello Games has revealed its latest free update for No Man’s Sky:

Origins. The update will effectively rewrite the entire game universe to add more variation, new planets, and much more – without altering user generated content. Origins brings the game to its 3.0 version, and it’s out today.Announced on the No Man’s Sky website (where you can see the full, enormous list of changes), Origins is 2020’s biggest update so far, and aims to offer a “stranger, richer and more varied universe, with deeper planetary diversity, dramatic new terrain, a host of new creatures, new weather conditions, colossal buildings, and much more.”

Among its many additions, the update adds brand new planets (with more dramatic scenery than previously possible, including active volcanoes), rare systems with multiple stars, a new UI, brand new fauna types and updated behaviours for them, dramatic weather systems (including lightning, fire and gravity storms), planetary NPC encounters, rare planets with entirely synthetic life, and more. On top of all that, giant sand worms have finally become a part of the game, after being teased in No Man’s Sky’s first ever trailer.

For those worried about their creations, these changes won’t touch or harm user-created structures, meaning the worlds around you might change, but your part in them will remain as you left it pre-update.Speaking to IGN, creator Sean Murray explained the meaning behind the update’s title, saying: “Origins is, yes, it’s another update, but it’s kind of a new start for us in some ways. And we wanted to get that across, that this isn’t an end. It isn’t just, ‘here is an update with some more content in’. It’s something quite fundamental for us, and that is that we’re adding more diversity, more variation to that universe, which is something that we haven’t really done that much. But also, we’re adding literal new planets. We’re going to birth them into the universe, which is quite a cool thing for us.

“It’s taken us a while to figure out how best to do it and how to make it work. But we have this really nice problem, which is we have this universe that the community owns, right? They’ve built bases on it. They’ve built communities. They’ve gone off and had adventures, made discoveries. And then, we come along and we say, ‘We want to make new planets, new worlds.’ We want to freshen all of this up, and so we were trying to find ways to do that without destroying what’s gone before. And so that’s been one of the ways that we’ve done it, is to just actually make the universe more dense, introduced new worlds, literal new worlds to go off and explore – and that’s the origin.”

There won’t be a given in-game reason for this to have happened, with Murray explaining: “So we talked about lore reasons. But, I don’t know, it’s been done before, that ‘cataclysm update’. And then, every NPC you talk to keeps mentioning the cataclysm. I don’t know. Personally, it doesn’t appeal to me. Because we know what’s happened, and it’s really strange to me for every NPC to suddenly start talking about DLC.”Unlike other recent updates, Origins aims primarily to improve what already exists in No Man’s Sky’s universe, rather than slot new features in around it, something Murray says was a goal because the team now had a sense of the existing game’s limits.

“We have this universe that we built four years ago, and we released it. And we said that thing of, ‘Even we don’t know what’s out there.’ […] People could go out and have this experience and send screenshots, and we would say, ‘Oh, I didn’t know it could do that.’ Or, ‘I haven’t seen that before.’ And then, actually, that hasn’t been true for the last four years for us […] For us to have that moment that I was talking about again, of what we had four years ago, where I will be looking at screenshots for the first time in four years being like, ‘Oh, I didn’t know that was possible.’ That’s the feeling that we want to get back.”

This doesn’t mark the end of 2020’s additions to No Man’s Sky, either, with Murray confirming that – although this has already been the game’s busiest year for updates – there’s more coming this year. “We’re all locked in our houses now,” he laughs. “What else can we do?”

I ask if any of those updates might involve a next-gen version of the game, but that’s one subject Murray won’t be drawn on, saying there’s nothing to announce about that:

“Next-gen is something we’ve been lucky enough to be included in, and have kits and all of that, from the very early days. It’s something I’m super excited about, but I have to say that annoying thing of, ‘We don’t have any announcements at the moment’. We have a big project planned in the future, and that’s part of the reason that we’re excited about next gen, and we’ll see if we’ll have any announcement for No Man’s Sky in the future.”

That “big project” is the huge, ambitious new game Murray mentioned earlier this month. During our talk, he made clear that he’s currently working across both games, but won’t be offering specifics about the new project because the team has “learned our lesson” after discussing No Man’s Sky too early in its development last time around.