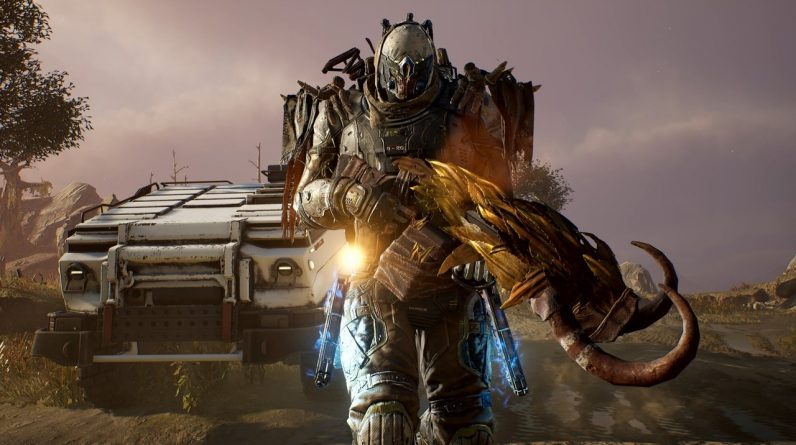 Outriders has the best abilities that I’ve ever used in a looter-shooter. It’s a power trip approach to supernatural skills unlike anything I’ve played in the genre. Spectral blades reduce time-slowed enemies to skeletons and entrail ribbons, while whips of flame draw unlucky victims close before roasting them to ashes. Bullets are caught mid-air, as if manipulated by The Matrix’s Neo, and hurled back at their owners. These powers make you feel like a super soldier that attended magic school.A recent hands-on with Outriders provided me with almost unlimited access to this outrageous buffet of powers, and each new skill sampled felt as exciting as the last. But while acting as an extensive combat showcase, the demonstration offered little to do outside of a couple of linear, bare-bones quests. It’s left me concerned as to what kind of a game Outriders will turn out to be beyond the perimeter of its great and gory killboxes.Developer People Can Fly deserves praise for how it has made abilities the core component of the combat loop. In games like Borderlands, Destiny, and The Division, your character’s skills are the punctuation that divide lengthy gunplay sentences. In Outriders, the abilities are the sentences; thanks to generously short cooldowns you’ll be engulfing enemies in flames or impaling them with stalagmites every few seconds. While gunplay doesn’t hold up to the refined standards of its peers, the lack of punch from Outriders’ weapons is more than compensated for by the frequent barrage of gory spectacle. The closest point of comparison is Diablo, in both the excessiveness of the abilities’ visual effects and how they form the backbone of every encounter.

Also akin to Diablo is how each of Outriders’ classes feels wholly distinct, rather than variations of a standard soldier template. The hands-on allowed me time with the Pyromancer, Devastator, and Trickster classes, and each feels genuinely unique to play. The heavy focus on abilities means more time is spent using the bespoke elements of a class, reducing the constant chorus of class-agnostic guns. Minor tweaks between classes provide surprisingly significant gameplay shifts, too. Killing enemies regenerates health, but while the Pyromancer can leech HP from a distance with sniper shots, the Trickster must get in close enough to smell an enemy’s breath. It’s a system that demands constant aggression, but all classes must feed it in different ways.

As a result, playing through the same level as the Pyromancer and Trickster makes Outriders feel almost like two different shooters. As the former, I found myself a little too enthusiastic about Heatwave; a skill that projects a wall of flame that travels forward and through cover, searing enemies who thought they were safe behind walls. I could then quickly follow up with F.A.S.E.R Beam – an extravagant Iron Man-style flame laser – to cremate mini-bosses and rejuvenate my health bar.

But as the Trickster, I found myself dying as if I’d decided it was the latest craze. Outriders pits you against a constant barrage of enemies, and because of its close-combat nature, the Trickster requires you to be right in the thick of them. The Hunt The Prey ability slingshots you behind a far-away enemy for the perfect backstab, while Cyclone Slice sends you whirling like a bladed spinning top into gangs of enemies. Many skills inflict a slow effect on foes, which helps make the roughest moments a little easier, but the Trickster is best suited to a player with strong melee crowd control talents. That, alas, is not me, and ultimately I found the hordes far easier to manage at the range afforded by the Pyromancer.

That’s not to say Outriders’ close combat is bad – far from it – but this feels like the best example in the looter-shooter genre of a game where it is vital to find the class that compliments your playstyle. Are you close or ranged? Or, as I discovered, are you somewhere in the middle, a battleground supported by the earth-based Devastator?

The hardiest of the three classes revealed so far, the Devastator is able to blast into combat like a boulder launched from a trebuchet. That’s almost literally one of his skills – Gravity Leap – which helps immediately close distances and deal damage. This can then be chained with Boulderdash, which turns the Devastator into an Incredible Hulk-like battering ram. Each class can only have three abilities active at a time, so finding a trio of accompanying skills is a vital character building block. For the Devastator, that last ability could be the self-explanatory Reflect Bullets. Or it could be Impale, which I’m pretty fond of, mostly due to the animation of an enemy succumbing as a spike erupts from the earth and up through their chin.

If it’s somehow not already clear, I love Outriders’ approach to combat. It’s surprising, energetic and wild. But even after a couple of hours with the game, I find myself still not knowing what Outriders is. People Can Fly has been clear that it is not a service game, but I’m unsure what that eliminates from the equation. Based on the hands-on, though, it appears that Outriders may be a largely linear shooter with not enough structural ambition to hold up its joyous battles.The demonstration afforded me just two activities, both of which felt underwhelming. Instructions were offered by forgettable characters, the geography of the locations felt generic, and the map seemed barren of any activities or secrets. The core quest was simply to follow a road to a bunker and talk to a person, with that journey snaking through several enemy camps, while the sidequest – discovered by taking the only sideroad off the main path – was an endurance-test wave battle within the confines of a different bunker. The experience was sorely lacking in anything to do beyond following the quest marker. While I’d rather a focused experience over Borderlands’ excessive opening of twenty lockers in every room and Destiny’s outrageously time-consuming challenges, I hope that further looks at Outriders will reveal more depth to its wider world.

If Outriders doesn’t have a myriad of activities beyond its campaign objectives, that puts a lot of pressure on its loot pursuit to be compelling. But that’s another area I have concerns about. As a looter-shooter, Outriders needs a constant flow of weapons that feel more exciting than just tools for the job. But my experience suggests that grabbing new gear feels more like topping up stats than finding something that makes your heart feel full. The hands-on provided an uninspiring assortment of shotguns, pistols, and assault rifles, and their replacements were almost identical aside from a less rusty finish and perhaps a garish paint job. For the system to succeed, it needs to demonstrate an arsenal as similarly flavourful as Destiny’s.

Outriders still needs to demonstrate an arsenal as flavourful as Destiny’s.

If Outriders’ end goal is to just be a straightforward shooter, then it does have a handy trick up its sleeve: an escalating difficulty system that builds pressure and tests your limits. Not dying for an extended period causes the World Tier to increase – up to a dizzying level 15 – with each tier upping the level of enemies and providing higher chances of better loot drops. In the hands-on session I experienced the increase from World Tier 3 to 4, which translates as normal to hard mode. The difference is immediate, with combat demanding much closer attention to enemy location and numbers. The extra pressure forces your muscle memory to make you dive for cover, but the health-leeching system demands that you get back out there and kill something. God knows what kind of challenge Tier 15 offers, but that’ll be a Twitch stream to watch.

It’s very easy to fall for Outriders’ combat. The combination of powerful elemental effects, kill-to-heal approach, and melon-bursting headshots makes it a punchy, kinetic affair. But right now, I need to see much more of its world, activities, and systems before I’m convinced that this tremendous violence is a vehicle for something worthwhile. I hope a deeper world is waiting in the wings, though, because I really want to impale a man with a spiky rock again. And again. And again.