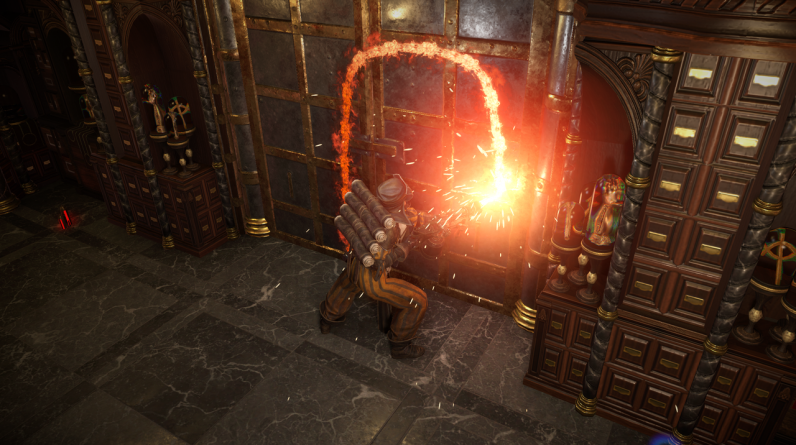 Action RPGs have always been based on a fairly simple foundation: Click the monsters until they die, collect some sweet new gear, repeat. Grinding Gear Games has spent the last several years looking for new ways to change this loop up and keep it fresh with their seasonal content in Path of Exile

, and Heist is looking to be the most novel and unique crack at it yet. In the new hub town of Rogue Harbour, you’re going to be putting a team together to plan out and execute some daring break-ins that will encourage research, stealth, and careful planning.Heists are instanced areas that differ from your average Path of Exile map due to an alert level that measures how… unsubtle you’re being. Alerting enemies to your presence or going out of your way to ransack optional loot rooms will raise the alert. If it reaches maximum, the whole place goes on red alert and you’ll find yourself swarmed with powerful enemies and your best bet is to make a run for it. This will also happen once you grab the artifact – the big prize you came here for, which will be some kind of potent rare item. Then, you have to get back out. Any loot you picked up in a heist will be lost forever if you die before reaching the exit.

This doesn’t mean they’re trying to turn Path of Exile into Splinter Cell. You’ll still do a fair bit of bashing, blasting, and zapping. But you’ll be making decisions throughout a heist about when to go in fireballs blazing and when to pursue a more subtle approach. And new avenues to overcome obstacles without simply slicing your way through them will be available thanks to your NPC crew.

Rogues bring AI-controlled companions to Path of Exile for the first time, though you’ll only be able to bring them along on Heists for now. There are 13 of them available, each with their own personalities, backstories, and abilities. Some are good at picking locks. Some can scoff at the very concept of locks and just ram straight through a bit of loose masonry to make an opening. You’ll also coordinate with these characters in the planning phase of a heist to arrange things like transportation and scouting out the joint.

One of the best things about the Heist system is that you can start messing with it from the very start of the new league. Maps are usually relegated to the endgame, but Contracts and Blueprints that unlock Heists and larger, sprawling Grand Heists will now be available as you level as well. These items are also tradeable, so if you’re not as interested in the smash and grab, you can at least profit off of the ones you nab along the way.Grand Heists differ from the garden variety ones by spanning multiple wings, each of which has its own alert level, so tipping off the guards in one won’t put the whole facility on lockdown. At the end of each is a treasure room that will allow you to pick one very potent reward from a small selection of different ones, forcing you to leave the others behind. Base blueprints can be improved by revealing extra wings, opening up new escape routes, and discovering bonus, optional treasure rooms. So you can head in as soon as you have one ready to go, or spend resources to turn it into a more elaborate, well-planned job.

Heist is also adding a new equipment slot for the first time in Path of Exile’s history. Trinkets don’t actually buff your character’s combat abilities, but rather allow you to customize the kinds of rewards you get from running Heists. One example will turn a certain number of common Regal Orbs that drop from chests into the much more sought-after Exalted Orbs. Others will increase the chances of certain modifiers like Corrupted appearing on items dropped by monsters. You’ll also finally be able to find enchanted weapons and body armor, though Grand Heists. These items are being designed to be a potent upgrade immediately, without much rerolling of slots or other crafty fiddling needed, to give you the sense that you can play with your new toy immediately.Funding Heists will require a new currency called markers, which can be gained by fencing the stolen Artifacts you get at the end of each one. You’ll also spend them paying rogues, and you’ll need a certain amount as a buy-in to prepare beforehand. Spending more marks before you go in can make your time a little easier, but it also cuts into the overall profit you’ll take home. And a failed heist doesn’t just mean you lose any loot you swiped – you’ll also be out all the markers you sent getting ready. It’s almost like adding a business management layer on top of everything.

There are a ton of other, smaller additions and improvements coming, like changes to Curse skills, new Unique items, and Mac support. You’ll be able to get your hands dirty on September 18.

Leana Hafer is an avid PC gamer. Talk action-RPGs, strategy games, and more with her on Twitter at @AsaTJ.