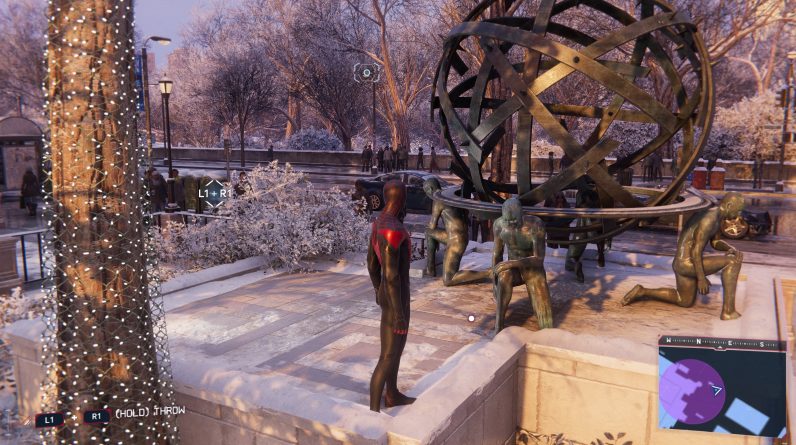 Each postcard you find will come with a message, and a clue to the next postcard location – you can only get them in a specific order. Finding them all will unlock a special cutscene.

Below is a list of locations and solutions for all Postcards.

The Upper West Side Postcard is unlocked by getting the first postcard at your apartment in Harlem. The clue points to the Natural History Museum:

“Facing the park, with the world on your shoulders, we guard the next clue.”

Find the Natural History Museum on the edge of Central Park on the middle east side of the district. Follow the clue’s direction and face the park, and look right from the museum down to the street corner where you can find a sculpture of several men holding up a giant globe. The postcard can be found alongside them next to the man at the back.

The Midtown Postcard is unlocked by getting the second postcard at the Natural History Museum. The clue points to the Empire State Building in Midtown:

“High atop the empire state, you’ll find a pair of blind eyes.”

Head downtown to the tall building in this district and run up to the top to find a viewing platform with tall guard rails. Head to the northeast corner of the viewing platform to find a few empty binocular stands – and look for one that has an out of order sign. The postcard will be at the base of the binoculars.

The Greenwich Postcard is unlocked by getting the third postcard at the Empire State Building. The clue points to the Museum of Modern Art in Greenwich:

“Find the fossil hiding among the modern. Don’t forget to Look Up!”

Travel to the top northwest part of the Greenwich district along the waterfront to find the museum. Looking at the sign on the building, look left for an upper balcony and zip up, and you’ll find a large shell fossil on display. Jump on top of the fossil to find where the postcard has been stashed.

“Where money is king, you’ll find great tunes, hanging among the lights.”

Head down south along the main street until you reach the music venue at the base of a tall building on the street corner. Under the sign for the venue, look to the right of the door for a small stepladder under a single light bulb. If you zip up onto the light, you’ll find the postcard on a stereo speaker mounted just to the left.

The Chinatown Postcard is unlocked by getting the fifth postcard at the C.O.D.B.s Nightclub. The clue points to a place called Lobster Bills in Chinatown:

“Nestled beneath Stuyvesant lives a monster of a good meal.”

Travel to the east side of the district along the rows of + shaped buildings to find the giant lobster and sign at a street corner. The postcard is located on top of the giant lobster itself, on its tail, which you can reach by zipping onto its back.

The Upper Eats Side Postcard is unlocked by getting the sixth postcard at Lobster Bills in Chinatown. The clue points to a place called El Barrio in the Upper East Side:

“No letter enters this artsy castle without stopping at the gate.”

Look along the north part of the district for a smaller looking castle-type building among the tall skyscrapers, and head around to the north-facing side of the building. While looking at the sign for El Barrio, notice the large iron gate, and inspect a mail box on the gate front to find the postcard.

The Harlem Postcard is the final postcard by getting the seventh postcard at El Barrio in the Upper East Side. The clue points back home to C.J. Walker Park, a place just to the east of Miles’ apartment:

“Beneath the hoop where you learned to fly, your journey comes to an end”

Travel back to Harlem and enter the park with the large stone sphere sculptures. On the side there are a few basketball courts, look for the the southern court and check around the east hoop for the final present, ending the sequence.