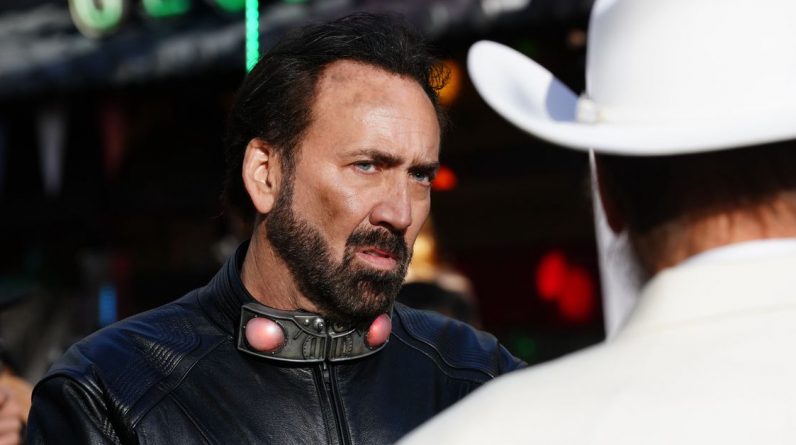 The moment a crotch bomb blows off Nic Cage’s nut in the first act of Prisoners of the Ghostland, and Cage kicks into a manic gear that only he possesses, it’s clear that Japanese auteur Sion Sono found a creative soul mate. The visionary director behind boundary-breaking genre films like Love Exposure, Why Don’t You Play in Hell, and Tokyo Tribe cast Cage in his post-apocalyptic Western samurai odyssey and, maybe expectedly, wound up with the human equivalent of gravitational force. The actor bends genre to his will, and in Prisoners of the Ghostland, his presence becomes vital to Sono avoiding simple pastiche.

Sono tells Polygon that he intends to work with Cage again — this time in a movie shot in America — but for now, he’s more than happy to celebrate the release of the film, which hit theaters and VOD on Sept. 17. In this short interview, conducted over Zoom with a translator, the director sheds light on where his elemental film emerged from, and how he worked with Cage to make it all work.

Sion Sono: So I think the big difference that you see in Japanese action movies … going back to all the movies from Kurosawa, for instance, or some Hong Kong action films, is that there are basically no explosions or big guns. It’s more like that they use the body. The action is literally the work of your body, that’s the idea. As opposed to American action films, [where] it’s more the actual equipment and the guns.

I grew up on American cinema, Hollywood movies. So it was rather organic for me [to make one]. Even while I was making all these Japanese films in the past, I was a little bit of a stranger in Japan, because my ideas and stuff all came from […] the influences that I got from those American Hollywood movies, European movies. So this time, it was rather natural for me. And it was even easier for me to get into this for the action stuff.

What films were swirling around your memories while conceiving the movie?

I did have quite a few films in mind when I was creating the world of Prisoners of the Ghostland. I put in some essence from Blade Runner, some essence from El Topo from [director Alejandro] Jodorowsky, and the satire from Federico Fellini. Those classics, and other movies that I grew up on. Those might be in there.

As in those films, costuming and design really bring the movie to life.

There are some different sections that you see in the film, like the bank scene, where the hero and the psycho character come in to rob the bank. That scene we created with a Japanese traditional festival tone with the costumes. And Ghostland is completely different. It’s like a refugee camp, no Japanese element in it. They’re stuck there. And the samurai town is like all the Kurosawa movies together in that town. So there was an East-West type of feel there.

I love the movie’s interpretation of American culture — how did you wind up with the Governor character, who dresses in all white, has a cowboy hat, and speaks with a Southern twang?

For Japanese like myself, the image of the Governor, I immediately thought it should be an image of that old guy from KFC. So somehow, the older white stuff is coming from that. I don’t truly mean that Colonel Sanders, the Kentucky Fried Chicken guy […] I’m not saying that he’s a bad guy. It’s just the image of this white suit.

How did you talk to Nic about interpreting the Western action movies you loved? Were you looking at his past roles?

There’s not really a character that I tried to use from any films that Nic Cage has acted in. But the one thing is that Nic really likes Charles Bronson from his movies from the ’70s. Nic and I discussed a lot about that and having fun with it. And we decided that maybe we should bring some of the older Bronson roles to this. So even on set, Nic would bring the soundtracks from old Sergio Leone films, and we listened to it. So that part, we definitely had fun creating the character together.

Nic certainly seems up for anything. The scene in which his bomb goes off and explodes his testicle looked very painful. Was it a real detonation of some kind?

Yes. The goal was to try to do as practical as possible on set. So for this testicle explosion scene, I felt sorry for Nic, but we didn’t really have a choice. My goal was to do this practically, so that was what happened. It looks very real.

Prisoners of the Ghostland is now in theaters and available to rent on Amazon, Apple, and other VOD platforms.