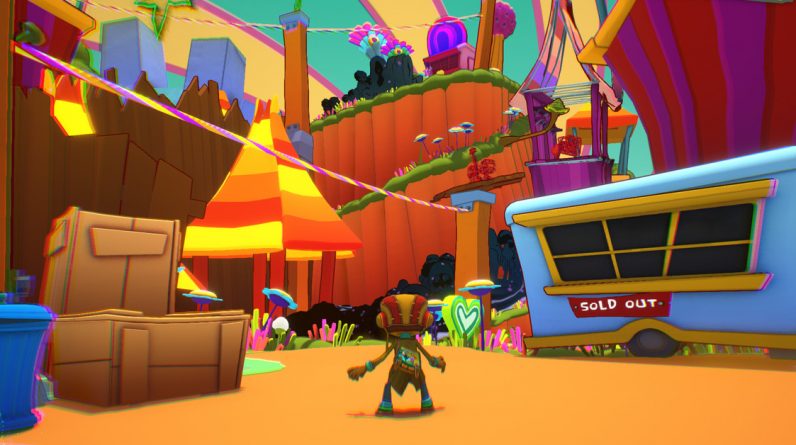 Psychonauts 2 begins with the camera sweeping over the textured contours of a giant brain. At this scale, the complex organ looks topographical — every curve a hill in the landscape of the mind. The image reminded me of one of the more common editions of Sigmund Freud’s landmark The Interpretation of Dreams. The cover image depicted a pastoral scene of rolling green hills. Or was it a lady lying down, her back to us? Or a great bull dozing among the gentle slopes? The idea here, I gather, is that dreams and the unconscious mind in general, work metaphorically. Things are rarely as they seem, and one thing often stands in for another.

Of course, Freud and his psychoanalytic techniques have a troubled history. It turns out, when you go digging around in people’s minds and try to resolve all their problems, you can sometimes end up making things worse. Psychonauts 2 seems well aware of this fact. It handles a litany of complex psychological issues — and some darker themes — with a great deal of warmth and compassion, to go along with all the humor.

Picking up from where the original game left off, you’re immediately thrown into the mind of ex-dentist Dr. Loboto. Together with other members of the Psychonauts, an elite group of psychic secret agents, you help construct an alternate reality for Loboto to try and manipulate him into giving over information. These early levels are sort of like Christopher Nolan’s Inception — a team of spies working together to infiltrate and overcome a mind’s defenses.

Loboto’s mindscape is a grizzly realm of body horror. Fleshy pink walls line the level, while toothy doors require you to unzip them using telekinesis. You’ll fight monsters of the mind (“Regrets” and “Doubts” in physicalized form) while collectibles like “Emotional Baggage” and “Repressed Memories” are secrets tucked away, up high in obscure corners or behind secret doors and false walls.

Memories give you snippets of backstory for whoever’s mind you happen to be in, but many of the other collectibles — including the shiny neon “Figments of Imagination” that litter the landscape — simply level up your Psychonaut rank. I’m no completionist, but I enjoyed the enthusiastic theming of Psychonauts 2’s collectibles, which constantly pull you away from the beaten path and off into unknown recesses.

There’s an infectious kind of energy to Psychonauts 2. Cutscenes are as exciting as the best Saturday morning cartoons, and the dialogue, in true Double Fine form, is snappy and pun-riddled. After a mission where you jet out to a huge casino complex, Psychonauts 2 settles into a more internally-focused rhythm.

The majority of the game takes place around the Psychonauts HQ. A large chunk of the game involves digging into how the international group of psychics began. The six founders are all broken men and women, minds filled with trauma and dark secrets relating to a confrontation that happened 20 years prior. Much of the game time involves getting these people to open up, and helping them confront the issues they’ve repressed.

Not to say the physical world of Psychonauts is dull — it features a waterfall that flows upwards, a vast tree-top playground, and a funicular, to name just a few things — but it’s the ten or so mental worlds that you enter that are the most vivid and unique.

Psychonaut 2’s levels are some of the most inventive in the platforming genre. There’s an over-the-top cooking game show where you carry food stuff through a giant platforming gauntlet. There’s also a humongous mailroom sorting office where you jump from flying envelope to flying envelope, all the while avoiding the vortex of letters below. You’ll visit highly imaginative, gravity-bending dreamscape after dreamscape.

As an out and out platformer, Psychonauts 2 also holds its own. Along with your satisfying little jumps, there’s your levitation ability, which allows you to float across landscapes as well as summon a levitation ball to ride upon, like a circus performer’s walking globe. There are some chunky sections centering around ball-rolling mechanics, and it’s a real testament that they never once proved frustrating. Not quite Marble Madness or Monkey Ball, but not many miles off.

Only a few new psychic powers are introduced in the sequel. There’s a time stop ability where you can slow down things that are spinning too fast; and a projection power that allows you to create a little paper version of yourself to distract enemies. Often you can use these abilities in imaginative ways, like using pyrokinesis to set a campfire alight, so it creates an upward gust of wind to combine with your levitation ability.

The ways in which you help the struggling Psychonaut founders later in the game is a far cry from how protagonist Razputin handles things early on. Gone is the Spy-like bravado, the meddling and overwriting of memories. Instead we have themes of empathy and responsibility. You’re not entering minds to fix people, but to have their backs and help them face past mistakes. While Psychonauts 2 deals admirably with a lot of these complex, psychological issues, it is a little shakier on some historical points.

Razputin is from a family of travelers, and much of Psychonauts 2 expands upon this background. It’s revealed that Raz’s family originates from the fictional, loosely Russian nation of “Grulovia”. But there are some unfortunate stereotypes at work here. Grulovia is portrayed as a failed state, torn apart by war and oppression in a similar way to Arstotzka from Papers, Please. The game is sympathetic towards this place, and even critical of the ultra-American Psychonauts’ interference there, but it still leans rather heavily on ideas of a tragic eastern European state. Wrapped up in this is the game’s weakest level — an annoying tour around a museum filled with mechanical puppets and brimming with propaganda. It’s reminiscent of the similarly awful “Hall of Heroes” level from Bioshock Infinite.

Some clumsy stereotypes notwithstanding, Psychonauts 2’s heart is in the right place. It does justice to the majority of its characters as it deftly handles a complex web of dark themes. Raz is an incredible protagonist, and many of the recurring characters — especially the gang of new intern sidekicks — are good fun too. For fans of the original game, Psychonauts 2 is a fantastic follow-up that offers a constant tide of twists and turns. Whether you’ve been waiting 15 years for the sequel, or are interested in checking the series out for the first time, rest assured that this is one of the most imaginative platforming games out there, with an absolute flood of joyous ideas and images.

Psychonauts 2 will be released on Aug. 25 on Windows PC, PlayStation 4, Xbox One, and Xbox Series X. The game was reviewed on Xbox using a pre-release download code provided by Double Fine Productions. Vox Media has affiliate partnerships. These do not influence editorial content, though Vox Media may earn commissions for products purchased via affiliate links. You can find additional information about Polygon’s ethics policy here.