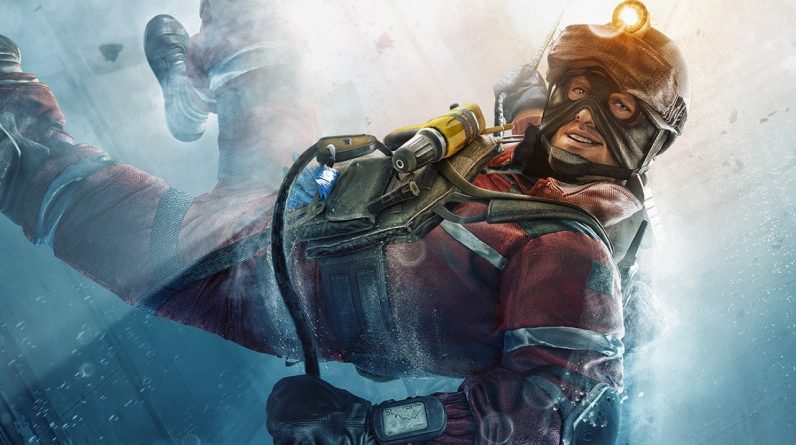 have failed to deliver any new operators that have truly shaken up the game. The middling impact of characters like Wamai and Amaru are perhaps why Ubisoft Montreal has pulled out the big guns for the latest update, Operation Steel Wave. The new season adds two operators so undeniably effective that it’s hard not to see this as a shot-in-the-arm formulated for the most immediate impact.Steel Wave introduces a new hard breacher and a defender able to dramatically slow down attackers. These are two invaluable roles, and both are much more obviously useful than the nuanced and situational abilities introduced over the past year.Our new attacker is Ace, who’s equipped with S.E.L.M.A. Aqua Breachers that work like a combination of Thermite and Hibana’s gadgets. The device is throwable, and when attached to a destructible wall will blow out a large rectangle-shaped hole after a short delay. So far, so Hibana. But after that first explosion, the cylinder rolls down the wall and begins to apply pressure again, bursting yet another chunk of the wall apart.

And then it does that again.

Yes, the Aqua Breacher, if uninterrupted, will blow out three chunks of a reinforced wall. That’s a cavity large enough to navigate through, putting it on par with a Thermite charge. And Ace has three of them. No other hard breacher is capable of this level of destruction.

With this in mind, why would you ever pick Thermite, who has just two exothermic charges, or Hibana, who’s launcher can only blow a maximum of three letterboxes? The answer is in the nuances of the gadget.

As the name suggests, the gadget is a hydraulic system that applies massive hydro pressure to cause walls to break. Water leaking through the wall indicates that the device is building pressure, much like how sparks indicate an exothermic charge. However, because the Aqua Breacher works in stages, it means defenders have much more time to intercept with a Mute jammer or the classic Bandit trick before a full-sized cavity is blasted through.

Furthermore, the multi-stage process means the system gradually opens sightlines that are as useful to the defenders inside as they are to the attackers. It means the Aqua Breacher can’t be used for quick breach-and-clear shock tactics, and is instead best suited for creating entrances you intend to circle back to later in the match.

That drawback doesn’t rob Ace of his advantages, though. As the game’s third hard breacher it means a team can take in a trio of demolition operators and ensure defenders have little in the form of hard cover. With Ubisoft promising small hard breaching devices as a secondary gadget for other operators in the future, it seems like a real shift in Siege’s destruction meta is on its way.

A similar shake up can be found in Steel Wave’s defender, Melusi. She’s equipped with the Banshee Sonic Defence system, a device that emits a thundering drone that causes attackers in a surprisingly wide area of effect to be slowed down. Melusi has three of them, and they’re all bulletproof. Yeah, this is a nightmare or a day at the fair, depending on your team.

The Banshee requires line of sight to trigger its debilitating noise, but its bulletproof casing means unprepared attackers have to crawl their way towards them in order to stop the effect with a melee strike. Throwable explosives or Thatcher’s EMPs are therefore vital to counter them. And you will want to counter them; unlike a Grzmot mine, the Banshee effect cannot be shaken off until the device is disabled. While the noise does not slow attackers to the point of feeling like wading through mud, it’s certainly enough of a disadvantage that defenders have the edge. And with three devices available to Melusi, it means most core routes into a bomb site can be locked down easily.

A reliable, automatic debuff system is something defenders don’t really have right now, especially with the recent adjustments made to Lesion’s poisonous Gu mines. That makes Melusi an incredibly attractive operator. The layout of certain bomb sites will certainly make the Banshee more or less viable because of that line of sight requirement, but finding the optimum position can mean rendering entire corridors or rooms impossible for defenders to efficiently navigate.

Steel Wave’s additions are incredibly viable operators, then. Even on an equipment level they are both strong. Ace is a two speed, two armor operator armed with Fuze’s AK12 assault rifle or the M1014 shotgun, a P9 handgun, and a choice of either breaching charges or smoke grenades. Melusi is a three speed, with either the T5SMG or Super90 shotgun, the RG15 pistol, and impact grenades or a deployable shield.As powerful as both of these operators may be, they don’t completely outshine Steel Wave’s map addition. That’s because it’s the game’s longest overdue rework: House. The most iconic map in Siege has been overhauled, and while it’s not quite as radical as you’d expect – this is the same house with broadly the same rooms and an extra extension – the changes do make it significantly more viable for both defenders and attackers.

Garage has been rearranged to provide more cover for defusal plants, and only one of the doors is now destructible, giving a boost to defenders. Many windows have been blocked in to reduce both peeking and incoming fire, and the area that used to be Workshop has now been renovated into a pink-decorated room with a walk-in closet (see: hiding spot). Kid’s bedroom now has a whole new room attached, which links to a staircase that descends to further new areas on the south side of the ground floor. Those extra rooms provide new flanking opportunities, and help the map feel more like a Rainbow Six kill box. That does, admittedly, come at the expense of the realistic suburban home feel.

Also, many walls now have a disgusting parquet floor-style design on them, which indicate that the people living in the house have no interior design taste in the slightest. Their abode deserves to be blown to smithereens, and luckily all of those parquet walls are fully destructible.

While much has been done to make House a more competitive map, it has been designed for casual play. As such, it will not be in the Ranked playlist. As one of the maps most beloved by Siege’s long term fans, this is likely going to come as sore news. It’s disappointing that Ubisoft hasn’t gone for a more substantial rework to make it suitable for higher-level play, and means many of the game’s most dedicated players simply won’t use it with any frequency.

Operation Steel Wave is the final Siege update to provide two new operators; from here on out, it’s one new member for Team Rainbow each season. It’s fitting, then, that the final duo arrive with – quite literally – a bang. That is, at least until they’re nerfed. Because Melusi is definitely getting nerfed.