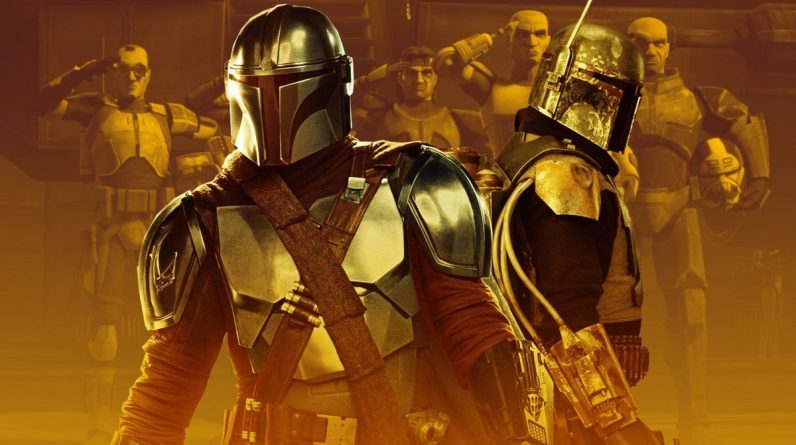 With so many Star Wars movies, TV series, comics, novels, and video games in the works, it’s safe to say there’s never been a better time to be obsessed with that galaxy far, far away. But to paraphrase Master Yoda, patience we must have. Many of these projects are still years down the road. So what can Star Wars fans actually look forward to in 2021?From new series like The Book of Boba Fett to ambitious publishing projects like The High Republic and games like LEGO Star Wars: The Skywalker Saga, here’s everything Star Wars fans can look forward to over the next 12 months.

Star Wars Shows on Disney Plus

If you’re hungry for new Star Wars content (and after the Season 2 finale of The Mandalorian, who isn’t?), you’ll want to keep a close eye on Disney+ throughout 2021. We can look forward to three new Star Wars shows to debut on the streamer this year, two of them animated and one live-action.

Most likely, Star Wars: The Bad Batch will be the first of these to materialize. This animated follow-up to Star Wars: The Clone Wars is set shortly after the events of Episode III and follows the titular team of elite Clonetroopers as they seek out a new destiny following the end of the war and the rise of the Empire. We don’t know much else about the plot yet, though the first teaser trailer confirms the team will run into future Grand Moff Tarkin during the course of the series. It also remains to be seen if The Bad Batch is a limited series or if Lucasfilm is producing multiple seasons.

The Book of Boba Fett

On the live-action front, there’s both good news and bad news. We probably won’t be getting a third season of The Mandalorian in 2021. However, we are getting the first Mandalorian spinoff in the form of The Book of Boba Fett, which features Boba and his new right-hand woman Fennec Shand as they take control of the late Jabba’s criminal empire. Look for that series to debut in December.

2021 may be lighter on the Star Wars TV front than fans are hoping, but we should at least see new glimpses of other live-action projects in the pipeline. With Obi-Wan Kenobi, Andor, The Acolyte, Lando, Ahsoka and Rangers of the New Republic all in active development at Disney+, the stream of new Star Wars content will continue to grow in the years ahead. We’re hoping to see trailers and other teases for at least some of these projects before the year is through.

Don’t expect Star Wars to return to the big screen in 2021. Or in 2022, for that matter. Between Disney pumping the brakes on new theatrical releases and the effects of the pandemic on Hollywood, we’re in the midst of a Star Wars movie drought that won’t end until Patty Jenkins’ Rogue Squadron movie arrives in December 2023.But while 2021 won’t bring with it any new Star Wars movies, we are hoping to get a better idea of Disney’s future release plans. As it is, Rogue Squadron is the only upcoming Star Wars movie where we have any concrete information. Despite Disney blocking out December 2025 and 2027 release dates for two other films, we have no idea what those movies will be about or who’s directing them. Is Lucasfilm still planning an Old Republic-themed series of movies, which is reportedly what directors David Benioff and DB Weiss were developing before they left the project? Is Rian Johnson’s Star Wars trilogy still happening? What is Kevin Feige’s mysterious Star Wars movie about?

2021 could either turn out to be a great year for Star Wars gamers or a fairly underwhelming one. Apart from the news that all future Star Wars games will be united under the Lucasfilm Games banner, we have few firm details on what the future holds for Star Wars gaming. But with EA no longer holding exclusive rights to the franchise, we have to assume the pace of new games will only increase from here.

LEGO Star Wars: The Skywalker Saga is the one video game release confirmed for 2021 (Spring 2021, to be specific). Not just a remaster of previous LEGO Star Wars games, this sequel gives all nine movies the blocky treatment and promises to build on a familiar formula in fun and unexpected ways.

Electronic Arts has been putting out one major Star Wars release each holiday season for the past few years. Hopefully, that trend will continue and LEGO Star Wars won’t be the only new game on offer. With Star Wars Battlefront II turning four years old this year, and with the trickle of new content for that online shooter having all but completely dried up now, we’re hopeful a full-fledged sequel is planned for a November or December release. If so, fans can probably expect to see the next chapter in the saga of Iden Versio and Inferno Squad, along with a variety of multiplayer modes iterating and improving upon what we saw in the first two games.

We’re also keeping our fingers crossed EA will finally confirm those rumors about a remake of Knights of the Old Republic. It’s probably too much to hope that such a remake would actually see release this year (especially with EA prepping a remastered Mass Effect Trilogy), but it is worth remembering the original KOTOR was first revealed at E3 2001. What better way to celebrate the 20th anniversary of that announcement than finally showing off the remake?

Finally, we know Jedi: Fallen Order is meant to kick off a new franchise. We don’t expect to see the next entry in this action RPG series to hit consoles in 2021, but hopefully, we’ll at least get our first glimpse of Fallen Order 2 at E3 or another event.

Kicking Off The High Republic

Publishing is one area where the Star Wars franchise is coming into the new year with blasters firing.

What Is the High Republic?

These various books aren’t telling a single, chronological story, but simply using the new setting and characters to add new layers to the Star Wars mythos. And with multiple new waves of books and comics in the works and even a TV tie-in in the form of Star Wars: The Acolyte, the High Republic era is one fans will become very familiar with in the years ahead.

If you prefer your Star Wars books to stick closer to the era of the movies, fear not. There’s plenty more to come this year. Marvel’s monthly Star Wars and Darth Vader comics will continue filling in the year-long gap between The Empire Strikes back and Return of the Jedi, showing us how Luke Skywalker became a full-fledged Jedi Knight and what Vader knew about his master’s plans for the Final Order. Lucas Books will also publish the second volume in Timothy Zahn’s Thrawn Ascendancy trilogy of novels, as we learn more about Thrawn’s life before joining the Empire, and the final volume in Alexander Freed’s Alphabet Squadron trilogy.

Star Wars: How Marvel Continues the Story of The Empire Strikes Back

And these are just the projects we know about. We can only assume there will be other exciting announcements in 2021, including the first comics and novels to spin out of The Mandalorian Lucasfilm previously teased in 2020. We can only hope these new stories will flesh out the respective back-stories of characters like Din Djarin and Cara Dune.

What do you most hope to see out of Star Wars in 2021? Let us know by voting in the poll below: