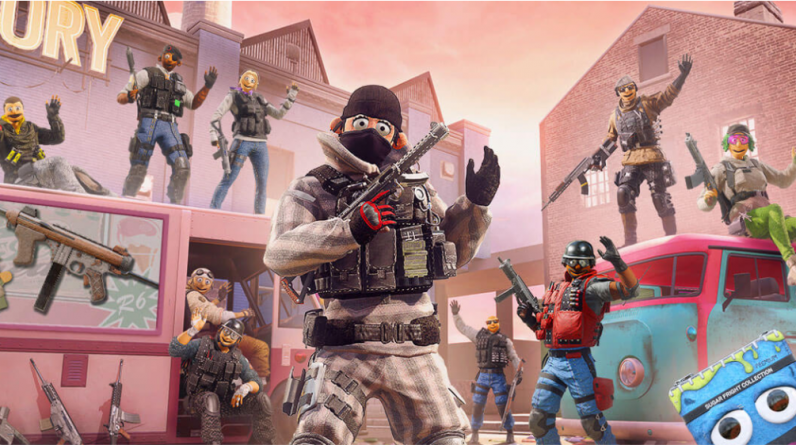 Sweet Hunt completely transforms the Rainbow Six: Siege experience into something more akin to other popular online shooter formulas. Players select from 5 available operators – all reimagined with a new puppet cosmetic appearance, and can select from only 3 Assault Rifles and two pistols, along with a frag and flashbang grenade.

Unlike other modes offered in Rainbow Six: Siege, “Sweet Hunt” allows players to respawn infinitely – greatly speeding up the pace of the action. The goal of the game is to collectively achieve 50 candy treats for your team – which are dropped by enemies after they are defeated.

However – the enemies have the same goal, and friendly players who are killed will similarly drop cupcakes that must be secured to prevent the opposing team from earning their own points. It’s a formula that many shooter fans may already be familiar with – but when incorporated with the mechanics of Rainbow Six: Siege, it can be a little difficult to get used to.

The following are the only weapons available in this mode:

Despite operators like IQ and Thermite being available to choose from – each operator is limited to these same weapons – and their special abilities have been disabled. The only difference between operators is their speed and armor – so be sure to choose the operator that matches your preferred style of combat.

The map playable in the Sugar Fright event is brand new to Rainbow Six: Siege. It features a more conventional 3-lane outdoor design that’s nearly symmetrical on either side. There’s no attacker or defender team here – just a straight-up brawl with infinite respawns. The center lane is wide-open, with clear sight lines to the opposite side of the map and a large central island structure that offers some additional cover.

The left and right lane feature several buildings with open doors and windows to climb through. Make use of ladders hidden around the sides to reach elevated vantage points. Each side of the map offers a 3-Story tower location that benefits players using long range scopes. Use frag grenades to clear these positions out.

Beware of spawn-campers. Players will always respawn in their base upstairs, and enemies can easily set up a position to the left or right of the spawn to rack up easy kills. Respawning players have spawn immunity for a few seconds – so use this to find adequate cover if you suspect a spawn camper.

The Sweet Fright event features 32 available items with a special pack-exclusive seasonal weapon skin and charm also up for grabs.

Operators in the new game mode are automatically equipped with new headgear, uniform, and weapon skins – but these items can also be purchased separately using 1680 R6Credits, or can be unlocked through “Sugar Fright Packs” for 300 R6Credits or 12,500 Renown. Packs can also be earned by completing various challenges throughout the event’s duration.