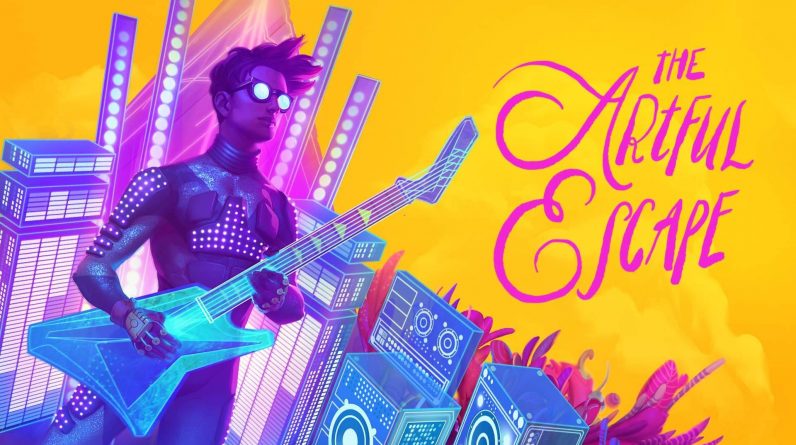 Yo. I’m Johnny Galvatron and I’m a person who works at Beethoven and Dinosaur. For the past two centuries we’ve been working on our psychedelic rock opera, musical narrative adventure, platforming kind-of-game. It’s called The Artful Escape.

The development of The Artful Escape has been like some rambling Pink Floyd prog-rock jam session. It has been an experience. With the unending support of Annapurna Interactive, the game is finally finished and is available for pre-order today. It will be out on September 9, which is… holy moly, a week from now.

The game follows Francis Vendetti on the day before his first performance. In an attempt to escape the musical legacy of his uncle, the teenage guitar prodigy embarks on a psychedelic journey to inspire his new stage persona. It’s an adventure spanning stolen opera houses, melodic alien landscapes, and the impossible depths of the Cosmic Extraordinary.

Being an adventure game there’s a bunch of dialogue floating about and it would’ve been crazy to try and record voice talent for all of it. But we did that anyway. The game stars Michael Johnston as Francis Vendetti and Caroline Kinley as Violetta. Lena Headey plays a giant floating asymmetrical space head. Jason Schwartzman plays a brain in an aquarium atop a flotilla of goldfish fins. Mark Strong plays the greatest amusement park designer in the universe and Carl Weathers plays a blues-inspired glam performer from beyond the stars.

The Artful Escape is about the satellite aspects of an artist’s persona: image, narrative, rumours, fashion, lighting. It’s about being inspired. It’s about not giving a damn what’s expected of you. It’s about shredding wildly on alien cliffs. We’ve given this game everything we had and we hope you find it a little bit special.

On the eve of his first performance, Francis Vendetti struggles with the legacy of a dead folk legend and the cosmic wanderings of his own imagination.

In an attempt to escape the musical legacy of his uncle, a teenage guitar prodigy embarks on a psychedelic journey to inspire his new stage persona, searching for who he isn’t in an adventure spanning stolen opera houses, melodic alien landscapes, and the impossible depths of the Cosmic Extraordinary.