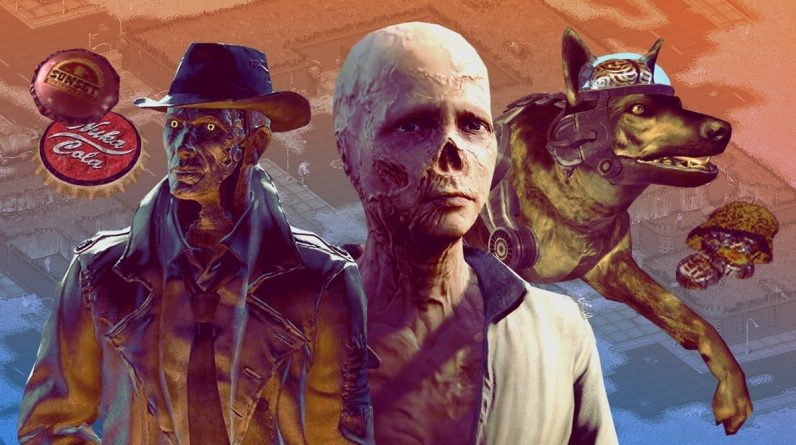 Adapting video games to other mediums has always been a hit or miss prospect – admittedly more on the ‘miss’ side – but with the recent news that Amazon is developing a Fallout series, we get yet another chance to reverse the game-to-movie stinker stigma.

Amazon’s lucky, though, because Fallout is a series that not only has some excellent established lore to draw from – you could make an entire show just about the split between the Enclave and the Brotherhood of Steel or the founding of the NCR – but with five games worth of stories and sidequests to pull from, the writer’s room could easily just CTRL-C/CTRL-V some of the best and call it a day.To that end, we’ve put together a list of some of the most intriguing moments and storylines from the Fallout games, ones that could be good fits for the Amazon series regardless of whether it’s set in The Commonwealth, Appalachia, or the Capitol or Mojave wastelands. Check out the video above, click through the gallery below, or scroll down for the full list!

The Best Fallout Stories For the Amazon Show

Let’s start off with the most recent game, not counting Bethesda’s latest go at an MMO, which would be Fallout 4.

It was the first game to start pre-apocalypse, and the show could embrace that in its pilot to establish the retro-futuristic world before the bombs start falling. Maybe start by following a VAULT-Tec salesman going door to door or prepping a Nuka-Cola brand event the morning that the Great War starts.

There’s always the chance that the show just pulls the plot straight from Fallout 4, in which case they could just recreate that prologue pretty much beat-for-beat.

Even if the parenthood element of this particular game might not be the direction Nolan and Joy may want to explore, part of Fallout 4’s main story does fit within their “big business intermingling with AI” wheelhouse. The Institute is a perfectly nebulous “big bad” that sits on the tongue of every resident of The Commonwealth with murky beginnings and operations, which is a great baseline for an inevitable confrontation between the citizens forced to live above ground and the seedy underbelly of the shadiest of Fallout factions.

Of course, if you’re going to pull from the main story of Fallout 4, why not use its strongest elements? Given the environment between the disenfranchised and the establishment and all parts in between, the Railroad storyline is not only relevant to our own current reality, but hits all the classic themes of Fallout in a pretty resolute manner. Freedom is a tricky thing, and oftentimes the lines are blurred. Should it come by way of direct force, or build up in an underground movement? This particular story toes that line between worldbuilding and narrative, introducing characters and local lore while also setting up the evils of the institute’s ultimate plan – if that;;ss something they want to incorporate at all, of course; though you could easily mesh that storyline with one from elsewhere in the series.

Sticking to that theme of the disparity between the haves and have-nots, the Megaton/Tenpenny Tower storyline from Fallout 3 is top-notch in terms of setting up the morally ambiguous nature of survival in the Fallout world, and introduce layered conflicts between factions – from the citizens of Megaton to the Ghouls seeking to make the tower their home – all of which could make for some great TV storytelling.

We don’t even need to look at main story beats, either – Amazon could make an entire season based just on the New Vegas DLCs, which are some of the finest add-ons ever added on.

The four excellent expansions explored clashing tones from somber to hilarious, and pushed the radioactive envelope as far as what fallout-based storytelling can accomplish, and Amazon would be wise to take a page from their respective novellas. Seeing as Lonesome Road, the last of the four, is very “end-y” and pretty lore-heavy, though, let’s focus on the three DLCs with stories that could be explored at any point in a Fallout series.

Joshua Graham, the Burned Man, is probably the most compelling character in all of Fallout canon, and would be perfectly cast if they go with Iain Glen (of Game of Thrones fame) burned alive and wrapped in mummy bandages. Graham provides haunting insights into the background of Caesar’s Legion and their enslaving armies, and his clash with the local White Leg scavengers, if handled properly, could prove especially resonant at a time when a battle against America’s history of systemic racism is at the forefront of the public consciousness.

Dead Money threw a number of fresh mechanics at players, and introduced us to a Super Mutant named Dog, or God, depending on his mood. It was essentially an irradiated retelling of the classic Western The Treasure of the Sierra Madre, and the time-tested formula of a lonesome treasure hunt turning compatriots against one another rips and/or slaps almost anywhere (or way) you deploy it. You’ve been invited to a gala event, Courier!

This comedic relief DLC, featured James Urbaniak (better known as Dr. Venture) as the voice of a mad scientist’s brain in a floating television body. He and his mad scientist/TV cohorts battle it out and engage in superspy shenanigans in “The Big MT,” a defunct government research station and source of all the mutated creatures of the wastelands. Anything lifted from this installment would make for a great origin story, flashback, or even easter egg during an opening montage that explains the nature of the Fallout world, though they might need to tweak the goofier aspects of the expansion depending on the tone Amazon is going for.

The Kid in the Fridge (Fallout 4)

If the show aims for a more serialized “monster of the week” format instead of a single long-form narrative, though, something like Fallout 4’s Kid in a Fridge quest would be a perfect fit. The story of the boy who tried to Indiana Jones his way through the two-hour nuclear war but mutated into a ghoul and got trapped for 200+ years would itself be a fitting worldbuilding anecdote or jump scare during a cold open, but if the showrunners keep in the full story of reuniting the kid with his (also ghoul-ified) parents and protecting them from slave-trading bandits would be “a very special episode of Fallout” indeed.

Another quest, one that is arguably a better fit for the whole Jonah Nolan/Lisa Joy aesthetic, Tranquility Lane is an incredible moment from Fallout 3 that sees the Lone Wanderer confront a corrupted AI computer pulled by the strings of its creator. Stanislaus Braun (aka Betty, the little girl within the simulation) who takes our hero on a psychotic quest of torturing the small neighborhood’s citizens within. The environment taps into the idyllic ‘50s nostalgia of the world, but soon reveals plenty of horrors under its thin veneer. Wherever the team plans to go with this new show, I definitely wouldn’t mind seeing at least a one-off episode about theis sadistic experiments of Stanislaus Braun, and the loops our character would have to go through to come out with “positive karma” by the episode’s end.

If Amazon wanted to give Fallout the anthology treatment, a la Black Mirror or The Twilight Zone, they could just focus on the vaults themselves. Vault-Tec experiments and programs were as varied as they were devious, and each Vault could be an episode or a whole story arc unto itself.

During what began as an experiment in cloning Overseer Brody Jones, each new clone, or “Gary” met the other non-clones with hostility, resulting in newer clones being created and eventually stored within the Vault’s observation rooms. While it’s unknown what happened to the other residents of Vault 108, by the time the Lone Wanderer arrives, the only ones left are the clones, who can only say one thing… their own names. “Hahaha…Garrrryyy”

This one is pretty simple, but a Vault full of Ghouls is always just too intriguing to pass by.

Vault 12 was a way for the government to test the effects of radiation on a select group of citizens, eventually turning them into Ghouls. The residents persevered through their harrowing mutation, however, and those that survived built their own city known as Necropolis.

Maybe for a bit of levity Amazon could even include a Control Vault, where we see vault-dwellers living out “normal” lives free of Vault-Tec’s bizarre experiments. Of course, given the creative team’s body of work, it’s unlikely a control vault episode would feature sitcom-levels of fun and/or hijinks. Rather, with no external forces for the vault residents to fight against, they’d be left to deal with the monotony of life underground and all the tension that humans can create for one another – all of which would probably come to a head much quicker with no outside world to escape to.

Vault 13: Where it All Began (Fallout)

We discussed newer game intros earlier, but there’s also the classic setup to the original Fallout that could very well serve as the catalyst for the Amazon series as well.

Vaults allow their residents survival (most of the time) thanks to incredibly complex systems, and if even a small part of them malfunction or break beyond repair, there are very few options beyond “find a new one… somewhere.”

It could be interesting to see an interpretation of the events of the original Fallout almost 30 years on – or just a fitting homage to the series’ legacy as Amazon takes a new Vault Dweller on their own unique journey.

Of course, all of these stories only really work so long as the core experience of wandering the wasteland in search of moral gray areas remains intact. Amazon has got to nail the basics. So, in closing, let it be said that if this show fails to feature a talking tree, a casino full of cannibals, or a street gang made up of just Elvis impersonators, it’s basically failed completely.

For more post-apocalyptic action, why not check out our recent interview with Brian Fargo (producer of the original Fallout) about the Wasteland 3 or everything we know about the PS5’s Horizon Forbidden West.What stories from the Fallout universe do you want to see in Amazon’s upcoming series? Let us know in the comments!